Home » Lifestyle » Heat wave forecast to bake most of U.S.

A sweltering summer heatwave will grip an unusually vast swath of the nation this week.

270 million people — that’s 84% of the continental U.S. population — will see highs above 90 degrees at least one day this week, and for most, it will be multiple days. At one time or another, about 150 million people will sweat through heat index numbers over 100 degrees.

While the heat wave will be expansive, it will not be very intense — at least at the beginning of the week. However, as the week wears on, the heat dome will recenter and intensify, bringing widespread heat index numbers of 105 to 115.

For the first half of the week, the core of the heat will be centered over the Great Lakes, Ohio Valley and Mid-Atlantic, with high temperatures in the low to mid 90s for cities like Detroit, Indianapolis and Washington D.C. When you factor in the humidity, feels like temperatures will top out near 100. The daytime heat will certainly be high, but not many records will fall. This will last through at least Friday.

Meanwhile, the western extent of this heat wave — over the lower plain states and lower Mississippi Valley — will become dominant and build later in the week into the weekend. Although it’s still several days away, in these areas, the heatwave may become quite severe.

Interesting evolution to the heat wave this week. Initially the heat core is over the Great Lakes, but then a subtropical high builds west and north merging with building heat dome over the Deep SW/ Lower Plains late week-weekend. Get ready for intense heat nation’s middle!! pic.twitter.com/AJ4iDqSpwl

By Thursday afternoon, heat index values will begin to top out around 105 from Kansas southward to Texas and east through Missouri, Arkansas and Louisiana. And it will only get more intense from there.

Widespread 105 -115 heat index numbers seem likely esp. in OK, TX, AR. There’s some disagreement in the models on how expansive and how intense the plains and MS Valley #heatwave will be later this week and into the weekend. pic.twitter.com/8VDZ7USdyt

This intensity of oppressive heat may last a full week, or even longer. The National Weather Service points to a long-lasting hot and dry spell across much of the nation for the next  8 to 14 days — especially across the Southwest and Plains States.

The figure below shows that the rate of both heat wave days and duration of heat waves, in most regions, is accelerating. The abbreviations on the right stand for different regions like CNA (Central North America), MED (Mediterranean) and Wor (the World). 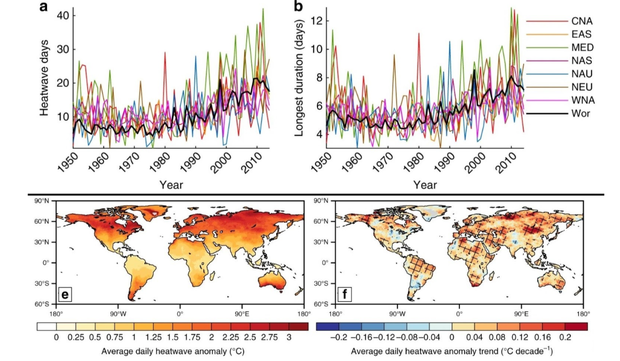 The maps above show the differing trends in each region. The left map indicates that the amount of heat on a given heat wave day (a day in which the temperature exceeds the heat wave threshold) is increasing all across the globe, generally by around 2+ degrees Celsius (4 degrees Fahrenheit) in the mid and high latitudes. The map on the right shows the trend per decade, which is rising in most areas, except, ironically, in Central North America.

The reasons for the lack of heat wave trend in the Central U.S. is not completely understood, but it is surmised that changes in the jet stream and the cooling impact of increased rainfall explains some of it. In addition, heat during the Dust Bowl years of the 1930s was so intense — due partially to detrimental land use — it has yet to be eclipsed, even with human-caused climate change.

While these factors have led to little overall heat trends for the central U.S. so far, research indicates that the severe heat waves that helped power the Dust Bowl are now more than twice as likely. In fact, the upcoming heatwave late this week into this weekend will be centered in the Dust Bowl regions of the western lower Plains.

This is an area that already faces a significant rainfall deficit. Over the past three months, the area has seen less than half of the normal amount of rain, and some locations are in the midst of their driest stretch on record.

It’s been a very dry stretch in the western Plains and SW US. And even more hot and dry weather = with a big heat dome – is expected as we head into the end of this week and weekend. pic.twitter.com/x6FycO494f

Because of the arched ground in Arizona, three of the state’s largest fires in modern history are currently burning simultaneously. The lack of rainfall has resulted in a large area of “extreme” drought, with some pockets exceeding “exceptional” threshold.

#heatdome will be the story in a few days. see circle. Here we see the #DroughtMonitor report showing an already troubling trend ahead of the heat. #ActOnClimate pic.twitter.com/LF0JQsGY5y

With an intense heat dome overhead, no significant rainfall is in the forecast. Over the next ten days, much of the drought-stricken area is not expected to receive more than a quarter of an inch of rain.

In the bigger picture, this is all part of a much longer term drought in the American West, lasting for the past twenty years. In fact, in a recent study, researchers found that the area has now entered into one of its worst Megadroughts in the past 1200 years.

The researchers say rising temperatures and increased evaporation due to human-caused climate change are responsible for about half the pace and severity of the current drought. Since regional temperatures in the West are projected to keep rising, this trend is likely to continue.