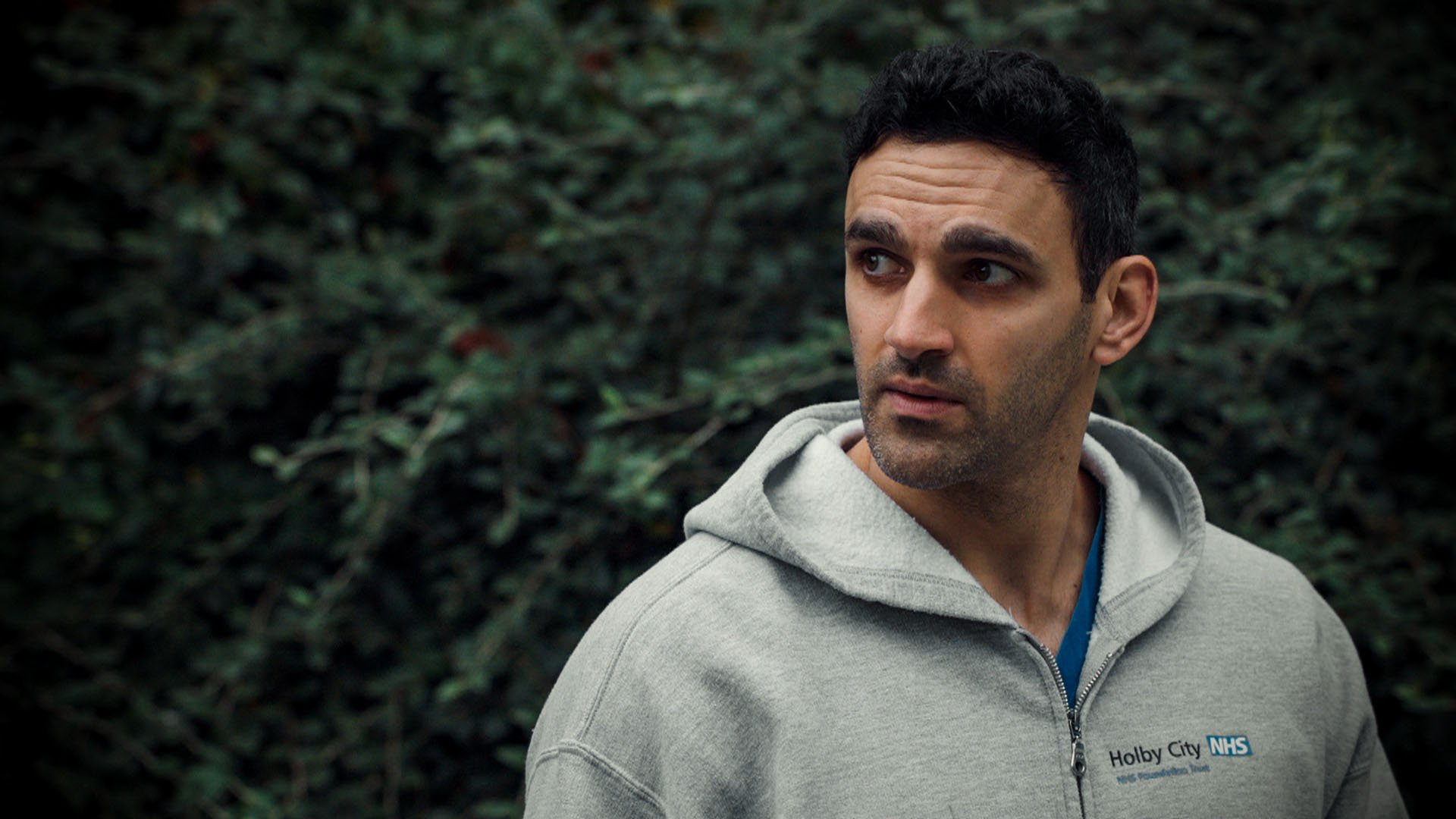 Holby City star Davood Ghadami was in quite a rare position when the show’s cancellation was announced.

News broke of the axing in June last year and a month later, Davood’s first scenes as Eli Ebahimi aired. There was a timeframe of just weeks between Davood leaving EastEnders and Holby being cancelled – he joined to play a permanent character, only to be told he wouldn’t actually be playing his role for that long.

Not even a year later and Davood has already filmed his final scenes as Eli, we sadly won’t ever know this character very well.

For Davood, knowing time was already running out for Eli, and the fact we’d never see him take centre stage in a huge storyline really altered his way of playing the character as he explains here to Metro.co.uk:

‘Eli’s happy place is an environment like Holby, that theatre space, when he’s performing surgery or doing ward rounds, when he’s able to impart deep, very difficult to understand, complex medical science, he can go in there and be his very best. I think that’s why – for Eli to come in and take it in his stride – that was very important for the character. He is a guy that knows what he’s doing, he might not be great in a kind of social setting, but in his work setting, his professional space, he is a pig in muck. I think, frankly, to play someone that knows 100% what they’re doing and that’s their entire focus has been really refreshing. He just cares about the job in hand.

‘Despite all his quirks, he’s quite lovable because of it. That came across in his domestic interactions as well, when his personal life came into it, it became really interesting there because he had to temper the love for his work with his day to day/life difficulties. It became extra special; he was a joy to play.’

Davood continues: ‘Once I knew the game was up with the show, I really wanted to pick at those strong points of the character, because you know – unlike any other continuing drama situation – there is finally an end. You really want to explore those to the greatest degree rather than waiting for the next thing, that allows for some exceptional drama as far as the whole cast are concerned but on an individual level, you can look at the character in different ways. That’s not something I’ve ever experienced; it really allows for something special.

‘Eli’s story is one of the very few happy endings to an extent in amongst what is going to be quite a dark ending for a few of the other characters. It’s a shame there isn’t more Eli. For me, it was so different to anything I’ve done before.’

We all know the Holby cast say working there is like working with family. For Davood, who entered this family very late, he was apprehensive at the start, but he was full of praise as he recalled how welcoming the cast and crew were:

‘It really is very much like a big, extended family. That goes beyond the cast that the audience see each week, it’s the camera guys, the makeup, production, everybody knows everybody. It’s a small group of good people and they are so welcoming as well. When you’re a family, it’s hard for new people to come in and ultimately, it could go either way, but they were so warm and welcoming, you felt like you were part of that family very quickly and I didn’t expect that.

‘It’s such a nice environment to be in, you work quite long days sometimes, often there are dark places you have to go to for some of the drama, so you need a supportive environment in order to get the best out of everybody – that’s why the show has been so successful for so long. To be a part of that for a very small period, I feel very lucky.’

Before Holby, Davood played the role of Kush Kazemi in EastEnders for seven years. Here, he gives us an interesting insight into how the cast of EastEnders viewed the Holby lot:

‘My time at Holby has been wonderful. There was always huge expectation with Holby, having been at EastEnders for quite a long time beforehand. Even when I was over there, everybody used to talk about Holby being an incredibly professional, talented, creative bunch. You could see it in what they were producing. Having that knowledge before going over I was obviously a bit anxious, but it was an environment that was highly respected. To get over there and find out all the rumours about what they are like were all true, was lovely.

‘It’s brilliant, it just created excellent drama and to be able to be dropped into it and have enough time, maybe not quite as long as I would’ve liked, but to have enough time to explore a character and their journey has been a real privilege. I’ve thoroughly enjoyed every minute of it.’

As we reach the end of our final ever Holby City chat, Davood passionately explains why he thinks Holby City is so important, and how the impact will very much be felt when the show isn’t on our screens:

‘We are reflecting something that is happening for real, continuously. We had the utter privilege of having consultants in so many situations on set, we got a large dose of reality. Them being there reminded us of what we’re doing, what we’re trying to recreate. There is nothing more important than your health, these guys that are with us on set, they were incredibly important to us. The finale really draws in what it means to work for the NHS and serve people in the way that they do.

Next week our #HolbyCityFinale… ð¬ series 23 of 23, episode 50 of 50. You won’t want to miss this. pic.twitter.com/38vKNXDuUx

‘For us, as a show, to ensure that we are referencing the very people we are trying to recreate I think is imperative to ensure the show goes off in the most justified way. I think it would’ve been wrong for the show to not reference the way the NHS is funded for example.

‘We might think that politics is for parliament only, but it’s everywhere, it’s in everyday life, if there are choices made at a political level, it will affect us and our families.

‘When you can filter that through drama, it can have a real-life affect.’