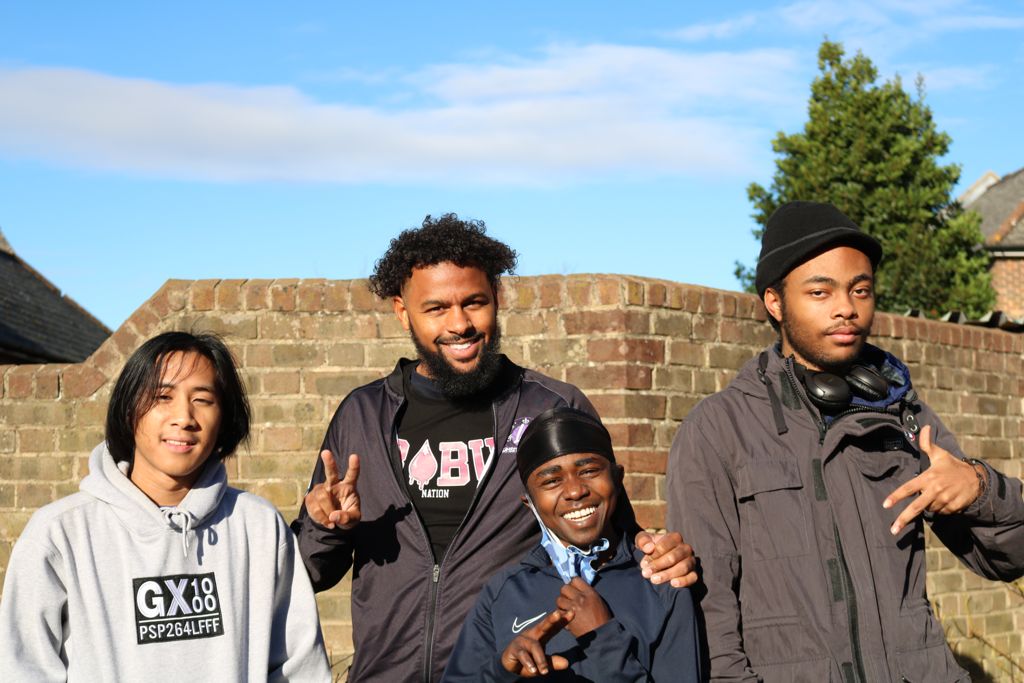 The moment my three teenage foster children, aged between 14 and 15, came into my home, my life changed.

I was extremely anxious and nervous, especially as one of the boys was a refugee and didn’t speak fluent English… I didn’t even know what foods he liked, which was overwhelming.

Thankfully, we found a way to communicate and the boys eased into life with me quite easily and we soon formed a bond. Now, we’re a family and I wouldn’t have it any other way.

I grew up in London, a city with areas that are more prone to crime and poverty than others. I lived in one of these areas – Streatham in South London.

During my teenage years, almost everyone I knew saw crime as an inevitability – as though doing anything positive or different simply wasn’t an option. Our opportunities were limited and young people could easily fall into the trap of criminality; gangs were rife and anti-social behaviour was, sadly, the ‘norm’ among young people in my area.

One wrong choice could have taken me down this path; I dread to think where I’d be today if that had been the case. However, I was able to find a positive outlet for my emotions that completely changed my life – football.

The sport became my solace, a safe place within which I discovered a purpose and routine. It allowed me to block out any distractions and focus on something healthy. I realised there was more to life, more that I could do, and the rest was history.

In my late teens, I began coaching ‘at-risk’ boys. Football had made my life so much better and that was something I wanted to share with other young lads who were in the same position I had been in.

This experience opened my eyes… I saw how much these children needed football to more positively process their emotions, channelling them into fulfilling behaviours and sport as a whole. I also saw how much they adored the game and, from that, how much power it had in shaping young people’s lives.

These boys would train for an hour or so every week and they loved it, they threw all of their energy and talent into the game with unwavering commitment, it really brought out the best in them.

During each session, we’d make great progress; they’d open up to me and we’d slowly start to work through their anxieties and self-doubt. However, if they went back to unstable home life, this progress would often be wiped clean.

After approximately six months, I decided I needed to do more. I was clearly capable of helping these boys – I’d shown that – but to make a real difference I needed to offer them more hands-on, permanent support.

It was this realisation that led me to fostering. Fostering allowed me to take children into my home who were vulnerable and needed care; I could create an environment within which they could flourish and receive the support they deserved, ultimately giving them the best possible chance in life.

Simply put, fostering is a voluntary agreement between a party and their local authority or fostering agency to care for a child.

I receive an allowance to cover necessities like rent and clothing and, in return, I provide these children with a loving, safe environment and support their development.

I was 25 years old and in a very fortunate position: I owned my own house, I didn’t have any kids of my own and I was financially stable. With this in mind I had nothing to hold me back. I had the resources and I cared – that’s all you really need to be a great foster parent.

Other people might have thought I was too young but I never did, I thought I was the perfect age because I could relate to these children and help them understand how they could shape a positive and fulfilling future for themselves.

Of course, it wasn’t something I’d ever considered before – like almost every other young man, I’d dreamt about being a pro footballer or something like that. Fostering isn’t exactly the norm for guys like me. Now however, I think it’s something I was always destined to do – I just didn’t know it yet.

I was convinced to foster by a family friend who was fostering at the time after I met one of the children they were looking after, saw how much they’d changed this child’s life and I knew it was something I wanted to do.

I started approaching local councils in 2015 but, unfortunately, I was turned away several times.

There’s a stereotype surrounding foster carers; people assume they’re all in their 50s, retired, and have raised children of their own. As a young, single man, I definitely didn’t fit that image, which I think worried people.

They thought I was too young and wouldn’t be able to carry the responsibility. It was the same with the people who knew me as well.

They saw that I cared and was passionate but my mates were shocked – they were all going out clubbing and I was prepping my flat for children.

My family were also very supportive and believed in me but they knew that the decision would mean I may not lead the typical life of a 25-year-old, which I was fine with. They couldn’t really understand it, but that didn’t matter – I just had different priorities.

Fortunately, Camden Council eventually believed in me and made me a foster carer; they saw that I could go on to do great things. The process ultimately took around seven months, after which time I welcomed three teenage boys into my home and the person I had been before changed instantly – I was now a parent.

I obviously hadn’t anticipated caring for three boys at once, however I received my first two referrals in the same month and then four months after that I received my final foster child. It was hard work and overwhelming but I think everything happens for a reason.

That wasn’t something I took lightly. I was actually in Qatar when I got the news and I was over the moon! I knew I needed to be prepared though.

I remember the first day the boys moved in. They went upstairs and I thought to myself: ‘What have you done, you’re responsible for these boys?! You’re caring for a child who doesn’t speak any English, how are you going to do it?

But I did do it. I was always determined to understand and help these children and was willing to think outside of the box to support them. I have a strong mindset so when it comes down to it, I never give up.

One of the biggest challenges I’ve faced was convincing the children’s parents that a young man was capable of taking care of their children. I can understand that’s something they didn’t expect and it was definitely difficult to overcome. The real high? Five years on, those same three boys are still with me today and I wouldn’t have it any other way.

Fostering has become my entire life – it’s my calling and something I dedicate almost every waking hour to.

It’s given me purpose and made me realise that all children need is love and care; it’s shifted my entire outlook on life and shapes all of my decisions. Fostering has pushed me into a career that I love and made me consider the lives of others before myself – I don’t think anything is more important than that.

After a couple of years, I decided that, again, I wanted to do more. I co-founded Kennedy Elliott, an organisation that provides care and accommodation for vulnerable young people between the ages of 11 and 25 who’ve faced extreme hardship and trauma.

As the Managing Director, I’ve helped to open several children’s homes across London, allowing us to care for even more ‘at-risk’ children. We’ve helped hundreds of children so far and, as we’re planning to open three more homes within the next year, this number is only going to grow.

The best and most fulfilling thing about being a foster carer is seeing these children graduate from school, college and university, helping them to rebuild the relationships they have with their biological families, and generally allowing them to become strong, happy people.

That’s how I’ll measure my life’s success; in the people I’ve helped and supported.

I’ve just received an MBE from Her Majesty the Queen for my work to support vulnerable children and that was a life-defining moment. It was incredibly emotional for my entire family and it’s something I’ll never forget.

Now, as I look to the future, I hope to help more children, travelling to different countries to make sure vulnerable people across the world are supported. I also want to prove that anyone can be a foster carer; you don’t need to fit a certain mould. If you’re willing to put a vulnerable child first and transform their life, you can do it.

More importantly, we need anyone who would consider caring for a child to do it. Britain’s foster care system needs you.’