Home » Lifestyle » I Met My Wife At My First Pride Parade, & It Changed My Life Forever

A few weeks before I attended my first Pride Parade, I ordered Chinese takeout and opened the fortune cookie that came with it. The message inside read, “You and your wife will be happy in your life together.” I remember thinking to myself: What if you meet your wife at Pride? Then I laughed at how ridiculous the idea sounded. Little did I know, that’s exactly what would happen. I met my wife at my first Pride Parade, and it changed my life forever for the better.

My first Pride Parade was a long time coming. I first suspected I wasn’t straight when I was 16 years old. Sure, I’d had crushes on guys before, but it was around that time when I also started to think about women in a romantic way. I came out to my friends as pansexual soon after, and by the time we graduated high school, most of them had come out as either bisexual, pansexual, or lesbian, too. We lived in a rural town in central Pennsylvania, and often talked about moving away, meeting new people in the LGBTQ+ community, and maybe, someday, attending a Pride festival. Shortly after I graduated high school, I moved to Washington D.C. for college and made plans to go to my first Pride Parade in 2016.

At first, I was supposed to meet up with a friend and march with a big group. Unfortunately, I ended up having to stay at work later than expected on the day of the parade, and missed the kickoff. I thought for sure my Pride plans were ruined, but it wasn’t a coincidence. Everything really does happen for a reason. 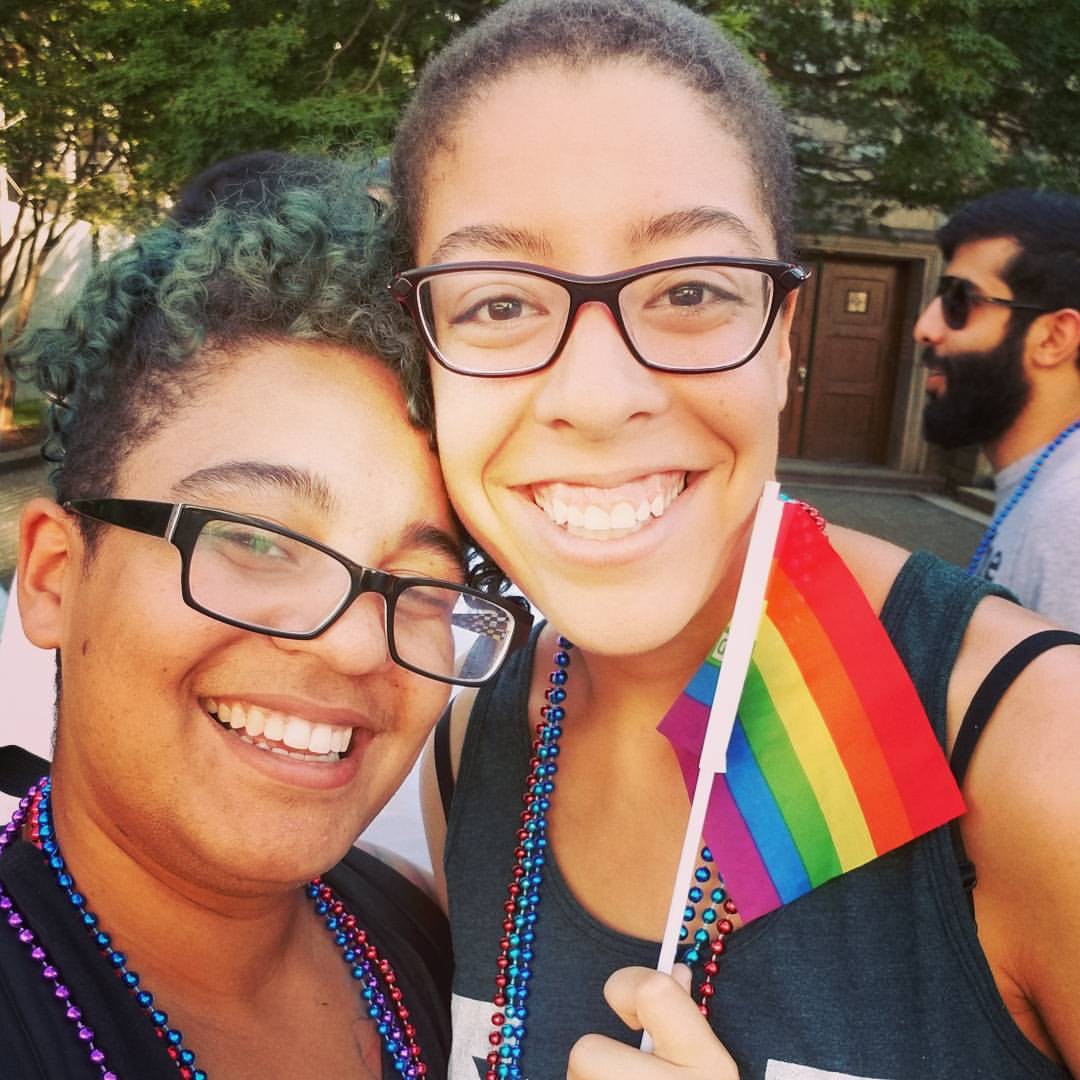 With some luck, I managed to meet up with a group of friends and scored an excellent view of the parade, despite the crowds. I was amazed at the sound and energy of the event. Parades were common in my hometown in Pennsylvania, but none of them were like this. There were thousands of people waving pride flags, and extravagant parade floats lined the D.C. streets. I didn’t think this experience could get any better. Then, out of nowhere, the cutest woman I’d ever seen bumped into me while trying to catch a beaded necklace. She apologized profusely, and we started talking. Normally I wouldn’t talk to a stranger who’d just bumped into me on the street, but something about her felt… different, though I couldn’t put my finger on what. It was Alexis, my future wife.

We got to talking, and ended up exchanging contact information. She enthusiastically invited me to attend an LGBTQ+ women’s party with her after the parade, but I hadn’t turned 21 yet and knew I wouldn’t be able to get in. We went our separate ways, but that night, I told my roommates all about her and thought about her all night.

The next morning, I nervously texted her to ask if she wanted to attend more Pride-themed festivities with me that day. I hit send and waited for what felt like forever. I was surprised at myself. Here I was, an introvert who rarely texted first (and certainly not to someone I had just met), staring eagerly at my phone, waiting for a reply. She couldn’t make it that day, but it was that text that kicked off our courtship. We talked and texted about her work as a software engineer, what had brought her to D.C., and her love of dogs. She thought it was so cool that I was an audio engineer, musician, and composer. 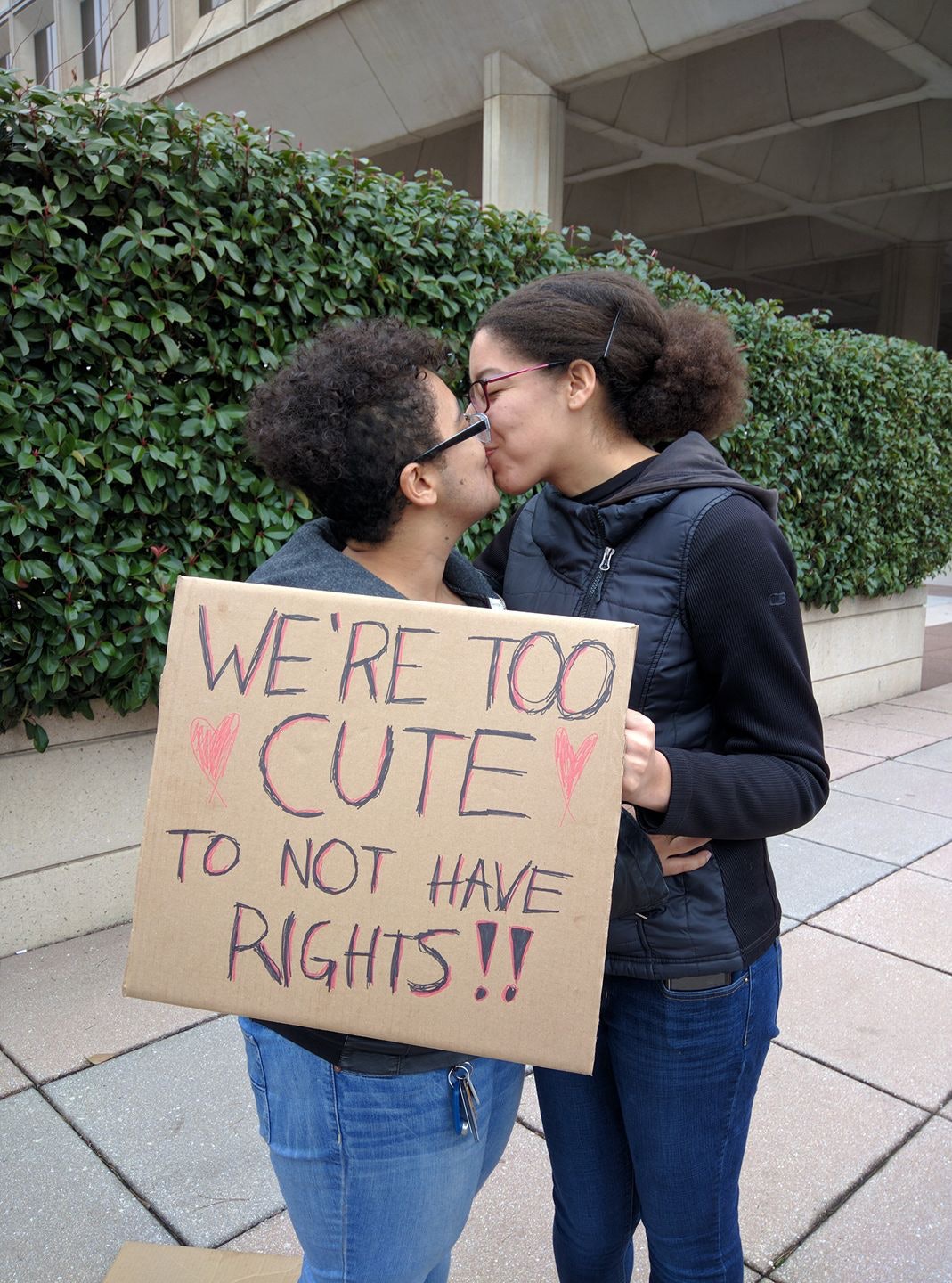 A few weeks later, we went on our first official date. I felt like my heart was going to burst out of my chest. Although I had been out as pansexual since I was 17 years old, this was the first time I had ever been on a date with a woman. Not only was I worried about standard first date things, like how I looked and what to say, but I was also nervous. How would we be perceived in public?

When I saw her, I slowly felt my pre-date nervousness melt away. We went to dinner and saw a movie, and when it was over, neither one of us wanted to leave. I felt like I was talking with someone I’d known for years, not someone I’d only met at Pride about a month before.

We explored D.C. together that night, stopping to get ice cream and later sitting by the Jefferson Memorial. We talked for hours, especially about what brought us to Pride to begin with. While I been out as pansexual for years, Alexis had only come out as bisexual a few months prior. Now that she knew she was a member of the LGBTQ+ community, she told me she wanted to learn as much as she could about our culture and history, and attending Pride was one of her first big steps in that journey. She told me she was so excited to start going to gay bars and clubs, seeing LGBTQ+ artists in concert, and attending more Pride events. I couldn’t help but think how fun it would be to do those things with her. We were out until 4 a.m. 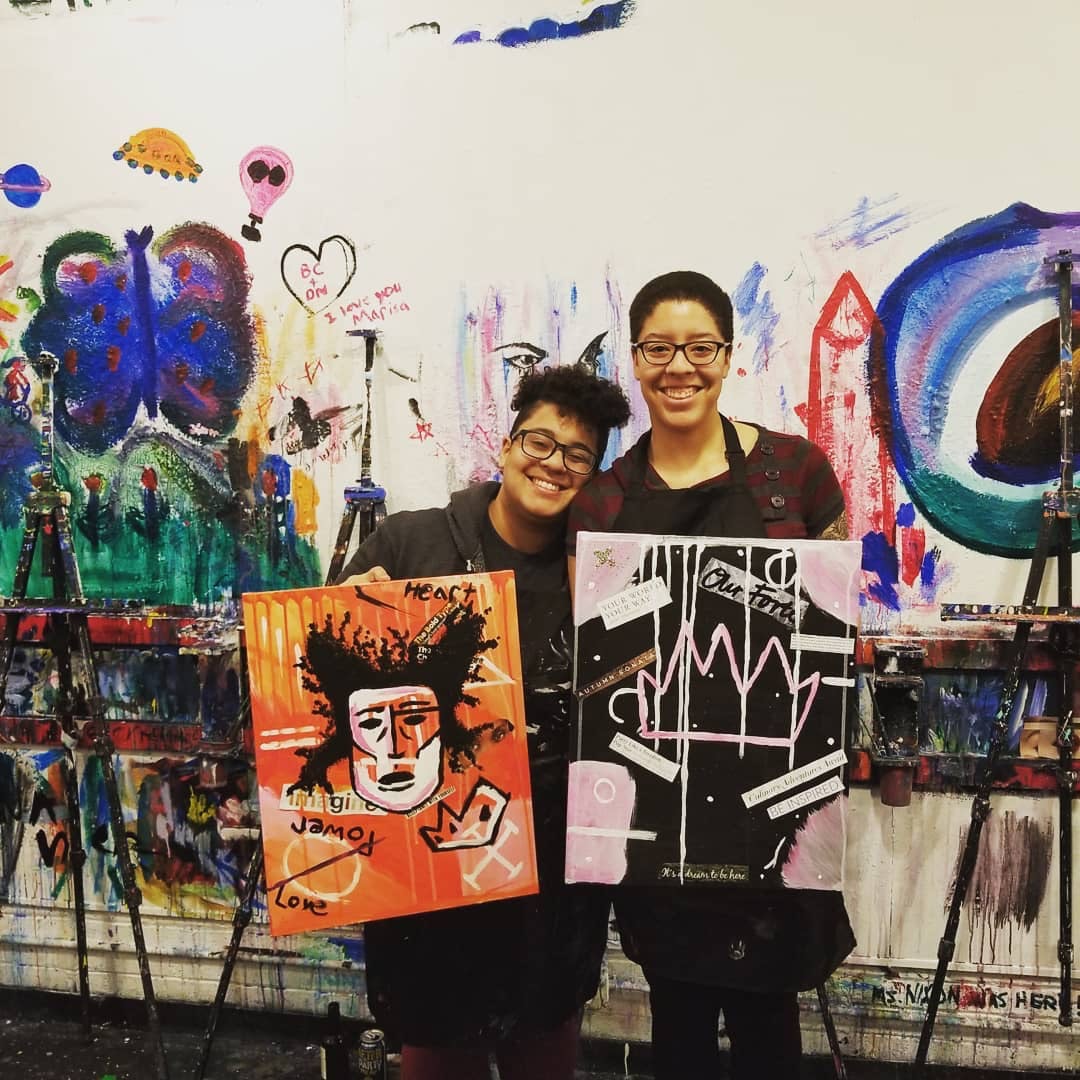 She gave me a ride home, and on the drive, confessed she liked me as more than just a friend. I was ecstatic, and told her I felt the same way. We officially started dating shortly after.

The Pride Parade where we met was the first large LGBTQ+ gathering Alexis and I had ever been to, but since we met, we’ve gone to two more Pride Parades together. In 2017, we watched the D.C. parade with friends and reminisced about how we had met only one year prior. Our friends joked that our story was an LGBTQ+ rom-com come to life. They weren’t wrong.

On the one-year anniversary of our first date, Alexis proposed to me at the Jefferson Memorial — the same place we went on our first date. The following year, in 2018, we attended Pride again, but this time we proudly marched together with Alexis’ company and coworkers. It was the first time her company had ever participated in a Pride Parade, in no small part due to Alexis’ advocacy and that of her fellow LGBTQ+ coworkers. Marching the entire parade route and seeing thousands of people celebrating who they are was an amazing experience, and doing it with my fiancée was indescribable. 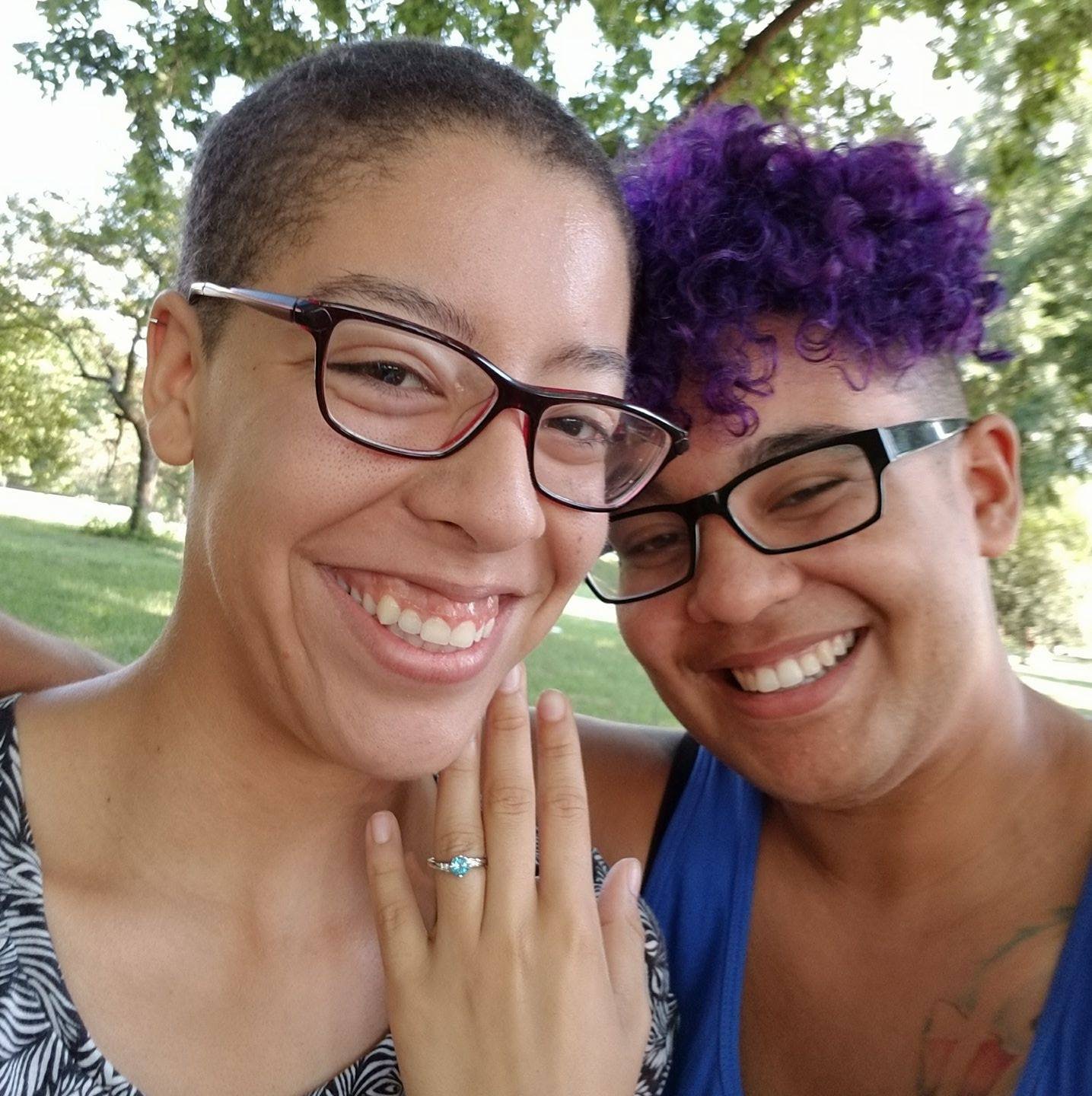 On May 6th, 2019, Alexis and I got married. We held the ceremony at the D.C. War Memorial on the National Mall, with a beautiful view of the Jefferson Memorial — a place that had grown to mean so much to us. It was a small wedding; we only invited about 25 people, including some of the friends I was with the day I met Alexis. Short and sweet, we celebrated our union by jumping the broom at the end of our ceremony. We wanted to celebrate not just our LGBTQ+ identities, but our shared African-American identities as well. Everything about the day felt perfect — the ceremony, the reception, seeing our friends and family, and heck, even the weather. We were engaged for just shy of two years, and it felt amazing to finally call Alexis my wife. Pride 2019 will be my fourth Pride Parade with Alexis, but it will be our first together as a married couple. It’s always been a special time of year for us, and I can’t wait to celebrate it with her for the rest of our lives.