Sector-wide bargaining throughout Australia’s “industrial revolution” of transitioning to clean energy is key to ensuring the climate wars are dead and buried, a key union figure has said in comments that have heightened suspicions from businesses and the opposition about the government’s agenda on multi-employer bargaining. 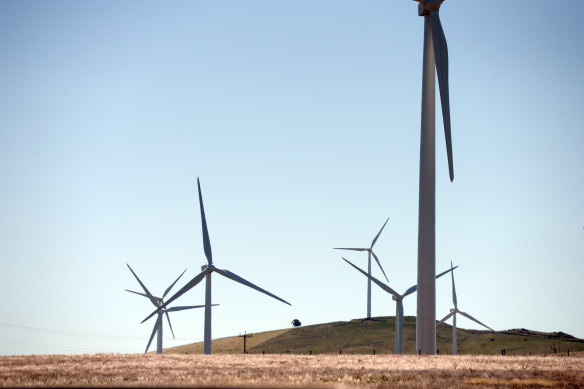 Electrical Trades Union acting national secretary Michael Wright said he wanted to see workers be able to negotiate pay deals across regions where major projects such as wind farms are being rolled out.Credit:Bloomberg

“Social licence is key to keeping the climate wars dead and buried, and that social licence can only be delivered if this quiet industrial revolution is characterised by decent and secure work,” Wright said in a speech to the Labor Environment Action Network last week.

The government estimates more than 600,000 jobs will be created by its Powering Australia policy, which includes a $20 billion loan facility to private companies investing in grid infrastructure.

Wright also said the right for sector-wide strikes should be guaranteed, and while no one “goes to work because they want to go on strike”, the right to undertake industrial action should not be stripped back for sector-wide deals.

“There’s an artificial distinction to draw between a major employer with hundreds of thousands of workers, those workers have access to industrial action, but a few hundred or a few thousand under a sectoral approach are denied it,” Wright said in comments made separately to the speech.

LEAN national co-convenor Felicity Wade said the organisation backed the ETU “entirely” on sector-wide bargaining “because the social licence for renewables has been severely eroded in regional Australia.”

“Cheaper power, lower emissions and better jobs are the keys to Australia’s energy future. That’s why we’re backing changes to workplace laws that will allow us to achieve those three goals,” Wade said.

Wright said he wanted to see workers be able to negotiate pay deals across regions where major projects such as wind farms are being rolled out to allow for consistency of work and training as smaller projects end and others begin.

He said the ability to bargain across multiple employers would guard against businesses undercutting one another as the government manages the transition from fossil fuels to clean energy, and ensuring higher wages would drive rather than hamper innovation.

The government has agreed to introduce legislation to allow workers to access multi-employer bargaining, particularly for small businesses and typically feminised industries such as aged care and childcare.

The Opposition’s industrial relations spokeswoman Michaelia Cash said the ETU proposal appeared to be a way of expanding multi-employer bargaining on an even wider scale.

“Now the industry-wide bargaining genie is out of the bottle we can expect unions will come up with more whacky ways to expand their influence and power,” Cash said.

“As in other sectors, multi-employer bargaining and industrial action in Australia’s renewables roll out will add to costs and uncertainty. It would become a huge disincentive to building renewables infrastructure and add to the higher labour and component costs already being experienced in the sector,” Willox said.

Wright’s comments followed a speech by Australian Council of Trade Unions secretary Sally McManus at the National Press Club on last Wednesday, in which she backed the use of industrial action to help workers negotiate multi-employer agreements, adding “if workers have no access to protected action, bargaining power is reduced to almost zero”.