This financial year, the federal, state and territory governments will, between them, collect $556 billion in taxes.

That’s the price we pay to run our defence forces, our health and emergency systems, maintain the rule of law, dissuade people from dangerous pursuits (such as smoking), pave our roads and improve the condition of our environment. 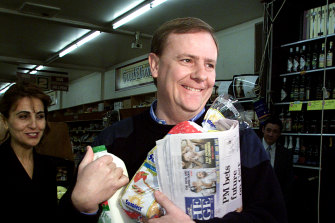 Peter Costello buys groceries on the first day of the GST on July 1, 2000. The GST marks the last far-reaching reform of the nation’s tax system.Credit:Ray Kennedy

As American US Supreme Court justice Oliver Wendell Holmes noted, “taxes are what we pay for civilised society”.

And because we want the best possible roads and police and working hospitals and a public school system, we need a tax system that efficiently raises the taxes necessary to pay for them.

Taxes change behaviour. They open avenues to wealth creation (or destruction). Make them too complex, and they can fail to achieve their stated aim.

Ultimately, a tax system should ensure a person with $1 to spend will make that choice based not on any tax advantage but on the merits of the good or service they want to purchase.

Across all these measures, however, the Australian tax system is struggling.

The last significant reform of the system occurred in 2000 when John Howard and Peter Costello put in place the GST. It capped a string of changes proposed by the Asprey review of the mid-1970s.

Since then, reform has effectively stopped but the reasons for change are only growing.

In terms of the nation’s finances, over the past two decades the federal budget has become increasingly addicted to tobacco, to the point the excise is the fourth-largest individual tax collected by Canberra.

Yet it is clear revenue is falling short of expectations, leaving a gap that has to be filled from elsewhere.

Policymakers are awake to the threat posed by electric vehicles which could sweep away the more than $20 billion in revenue collected from petrol and diesel excise.

The GST was introduced to broaden the tax base, to remove its reliance on personal income tax. But changes in our economy, and the failure to embrace change, means the proportion of revenue coming from ordinary wage earners is approaching its pre-GST levels.

We have a system where the little interest on a bank deposit is taxed at a person’s marginal rate. But put the money into a superannuation account and the tax bill is far less.

The OECD recently noted an Australian using the bank faces one of the highest effective tax rates in the world but one channelling their cash into super faces one of the lowest rates. Together, it encourages people into “costly tax planning schemes and distorts the flow of savings”.

In his 2010 budget, then-treasurer Wayne Swan built on a proposal from the Henry tax review and promised a 50 per cent discount on up to $1000 of interest in a move that would have benefited 5.7 million Australians.

But like many reforms, the plan was jettisoned. The collapse of the planned Resource Super Profits Tax and a string of budget deficits meant the plan, which would have cost almost $500 million in foregone revenue, was axed before ever being put in place.

Henry still offers many options worthy of consideration. Joe Hockey’s effort at reform, the aborted Re:Think tax white paper, was an acknowledgement the tax system had to change.

That was six years ago.

There has been tinkering, the most significant being around superannuation (which hurt the Coalition at the 2016 election and had to be watered down). While small businesses have had their taxes cut, the nation’s largest taxpayers – the five big banks – are now paying a $1.6 billion annual levy.

The coalition’s flagship “tax reform” – a three-stage, 7-year plan – is actually just returning bracket creep to wage earners. Within a handful of years, another round of tax cuts will be necessary to return even more bracket creep.

As the 2019 election showed, an opposition with a broad-ranging tax reform package is all but writing an electoral suicide note.

Combined, Henry and Re:Think could be a way forward. They could be the starting point for a new tax conversation that would look at how the tax system works, if its very structure is having economic consequences and what changes are necessary to bring it up to the 21st century.

As noted by Jean-Baptiste Colbert, the first minister of state to King Louis XIV in the 17th century, how we tax can be just as important as why we tax.

“The art of taxation consists in so plucking the goose as to obtain the largest number of feathers with the least possible amount of hissing,” he argued.

Without a proper tax system, the Australian goose could be cooked.