The Colombian reggaeton artist, who has 13 nominations for the 2020 Latin Grammys on Nov. 19, debuted the sneakers at Super Bowl LIV, as a guest performer in Jennifer Lopez and Shakira’s halftime show performance, and then teased the style on his Instagram, with frequent collaborator Bad Bunny.

After nearly a yearlong wait, Jordan and the multiplatinum recording artist are launching the sneakers at select global retailers on Dec. 8.

The multicolor, high-top sneaker boasts a tie-dye denim upper with warm colors by the laces and cooler colors at the heel and toe box, as well as Balvin’s smile motif with lightning bolts for eyes on the sneakers’ heels and on the tongue of the left sneaker. The sneakers will retail for $190.

“I just wanted to show positive vibes on the sneaker,” he explained. “It’s the first time a Latin artist is doing a Jordan sneaker, so I wanted it to be that whenever you see them you know what they are. When I was in Portland [Ore.] with everyone, we said let’s do denim, and let’s switch it up and make a statement. It’s an Air Jordan I, but it has our flavor on it and we went really out loud. I knew what I wanted. It was on purpose and I wanted to tell my story about good vibes, colors and energy, tolerance, love and just make you feel happy. I’m proud to be Latino and be the first artist to do it.”

Bride of the Times 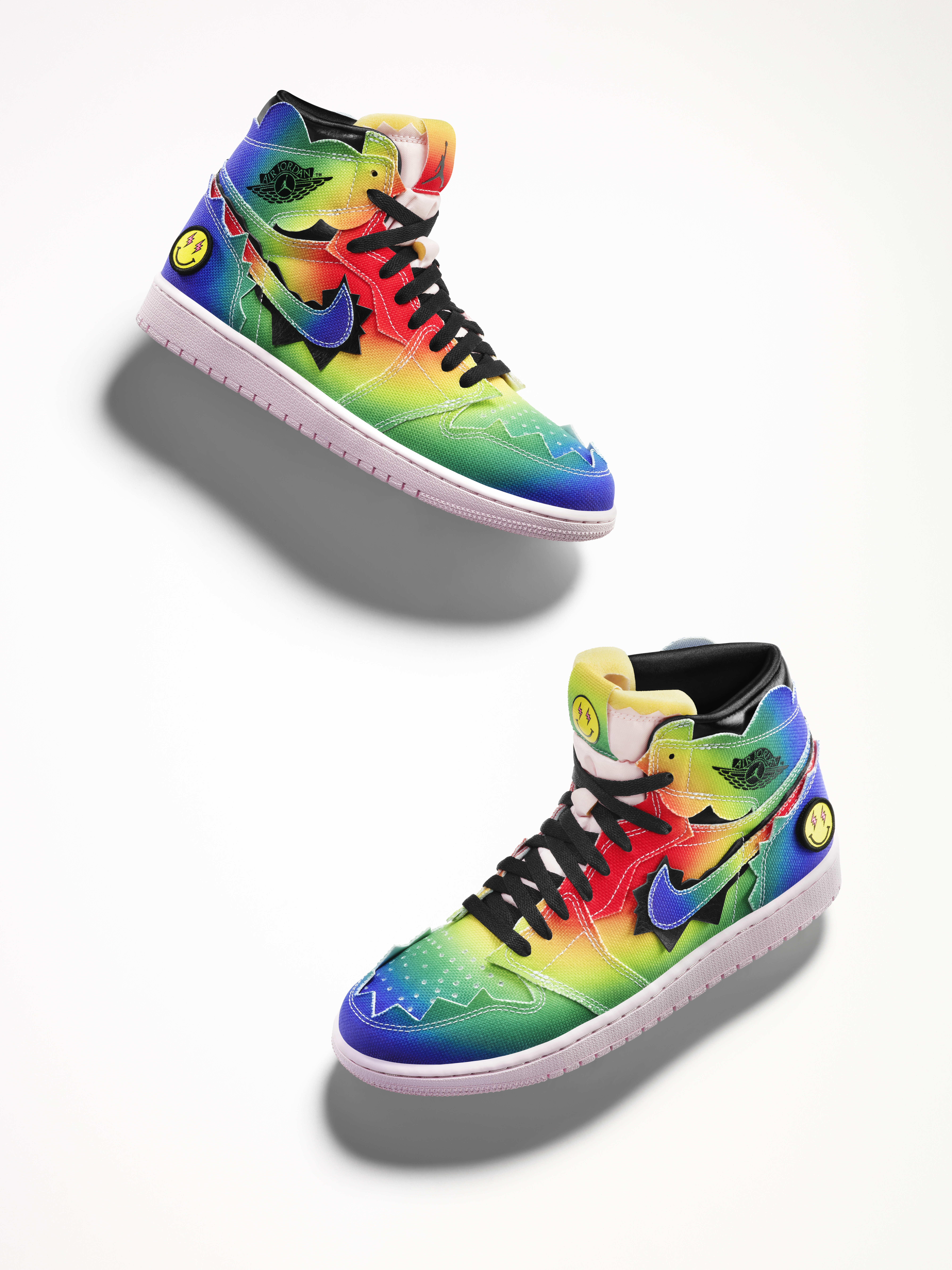 This year has been a special one for Balvin, who in addition to performing at the Super Bowl — “The whole mood at the Super Bowl was just beautiful; it was a really nice moment for the culture,” he said — secured a Grammy nomination for Best Latin Rock, Urban or Alternative Album for “Oasis,” his collaboration album with Bad Bunny, and racked up 13 Latin Grammys nominations. He also released his fifth album, “Colores,” which is nominated for Album of the Year at the Latin Grammys against Oasis.

He also released his first collaboration with artist Takashi Murakami, and gave a glimpse into his fast food meal of choice with McDonald’s. He spoke humbly about his affinity for fashion and style and considering himself a sneakerhead, but he does have an ongoing partnership with Guess that saw another collection launch this year.

“When it comes to fashion, I don’t know if I have a style or not, but I just think it’s about feeling comfortable with yourself,” he said. “When I was a kid, my mom used to take me shopping and said, ‘Try this or that,’ or ‘Let me put this hat on you and try these sneakers,’ and as I grew up I was looking more at what I wanted.”

Growing up, he also used to wait in line for Jordan sneakers. “I reminisce about being in Miami or in Queens waiting on the line or begging people to wait in line for sneakers, but to have my own sneaker is just crazy. And that’s why this means a lot to me.”

He continued, “There are ways to connect with the world and basically to connect with sneakers right now is one of my biggest dreams, because it’s like a legacy. I’m the first Latin artist ever to do an Air Jordan I collaboration. As a Latino, I feel I’m a global citizen, but all of the Latinos are so proud of this move. I see many people feeling the love and I’m grateful.”

The Air Jordan I x J Balvin sneakers were originally expected to launch earlier in the year, but Balvin said the plan was disrupted by COVID-19. He said the SuperBowl debut was intended to generate buzz for the sneaker, but always a man of positive vibes, Balvin said the wait was a good thing.

“It’s like we’re finishing the year brighter and with good vibes,” he said. The sneakers themselves are like a rainbow at the end of a storm.”

But are more sneakers on the way?

Balvin said he would like to collaborate on another of his favorite styles such as the Air Jordan III, IV or XI, but ultimately said it’s a difficult question to answer. “I love all of them,” he said. “We’re always down to keep creating, but it’s the first drop and we’re making a connection to the world and making a statement. Let’s keep elevating the culture and inspire the kids and new generation to dream big.”