The Reserve Bank has conceded record-low interest rates are contributing to soaring house prices but warned governments and regulators it is their problem to solve as the central bank focuses on driving down unemployment.

RBA deputy governor Guy Debelle on Thursday night used a speech to the University of Western Australia to argue that while high house prices created problems, a lift in interest rates would hurt the jobs market even more. 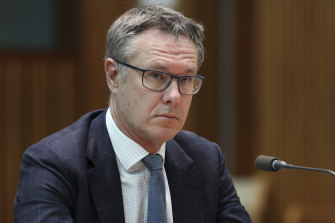 House prices have accelerated in recent months, with the official cash rate sitting at 0.1 per cent and most commercial banks offering mortgage rates of less than 2 per cent.

The situation has got to a point that banks are struggling to process the number of mortgage applications coming through the door, while mortgage brokers are reporting strong demand, including from people who have successfully bid for a house at auction before locking in funding.

Dr Debelle said rising house prices were evidence of the way low rates were working through the economy. They encouraged home building that helped boost activity and employment.

He said while there were legitimate equity concerns about house prices, ultimately those issues were outside the purview of the RBA.

“The bank recognises that rising housing prices heighten concerns in parts of the community,” he said. “Housing price rises can have distributional consequences. That is certainly an issue that needs to be considered and there are a number of tools that can be used to address the issue.

While house prices might not rise as fast without low rates, unemployment would definitely be materially higher without the monetary stimulus, he said.

The bank has previously argued changes around city planning, infrastructure and tax concessions may be required to deal with high house prices.

Dr Debelle said the economy was doing much better than even it had expected, with unemployment down to 5.6 per cent and strong spending by households.

But he said the bank was focused on trying to drive the jobless rate even lower to push up wages growth and inflation.

“Outcomes in the Australian economy have significantly exceeded even the optimistic expectations in terms of economic activity. But that is not the case on the nominal side of the economy in terms of wages and inflation,” he said.

“While the Australian economy has experienced better employment outcomes than most other countries, wages growth in Australia has been noticeably weaker than in many comparable economies, most notably the United States.”