Kate Middleton lives a ‘normal’ life like ‘any busy working mum’ with the ‘children running around and knocking things over’ at their Kensington Palace home, a friend tells People

She may be the future Queen, but Kate Middleton has a ‘normal life’ like ‘any busy working mum’ a friend has claimed.

Speaking to People magazine, a source said the Duchess of Cambridge, 38,  runs a busy family home, with her children  – Prince George, seven, Princess Charlotte, five, and Prince Louis, two – ‘running around and knocking things over; with ‘no air and graces’.

‘When you see her behind closed doors with the children, she’s a very confident mum, and she’s no pushover. The children get told off if they act up,’ the source said. 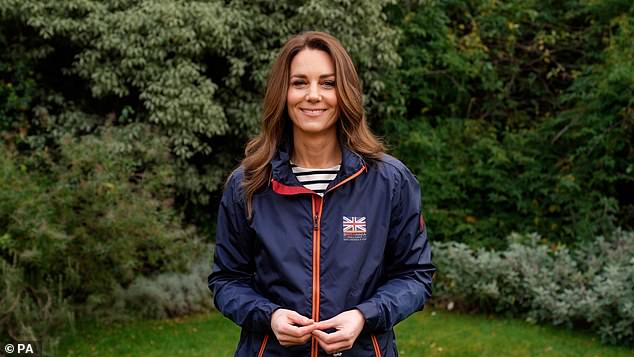 Kate Middleton has a ‘normal life’ like ‘any busy working mum’ a friend has claimed. She is pictured last week in a virtual message to the British sailing team

And despite often being pictured at glamorous events in stunning dresses with a well-coiffed ‘do, the royal has her hair tied up in a ponytail and is often in gym clothes, trainers and very little make-up on the school run.

The source added Kate is often apologising for being late, and helps her children stay grounded in reality.

William and Kate get helped from ‘Spanish Supernanny’  Maria Borrallo, who they hired when Prince George was eight months old.

Also on hand is  Natasha Archer, her stylist and personal assistant, who has been described as Kate’s ‘right hand woman’. 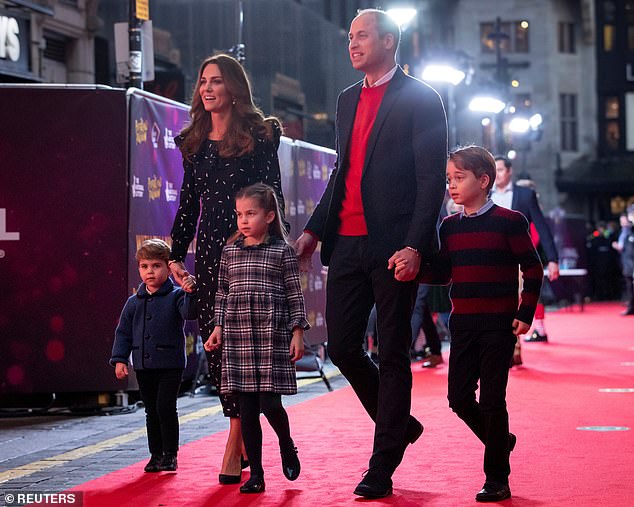 Despite often being pictured at glamorous events in stunning dresses with a well-coiffed ‘do, Kate has her hair tied up in a ponytail and is often in gym clothes, trainers and very little make-up on the school run, a local mum claimed. She is pictured with Prince William, and her children, Prince Louis, Princess Charlotte, and Prince George, last week

‘If you look at the people around her, it’s a tight team. She would be lost without Maria, Tash and everyone. They work very hard, but they make it possible for Kate to juggle everything,’ the source added.

It comes as the Duke and Duchess of Cambridge’s family Christmas photo was released, with a body language expert telling FEMAIL it shows ‘tight family unity’ and that Kate as ‘the backbone’ of the family’.

Judi James suggested Kate’s arm around daughter Charlotte’s waist shows a gesture of inclusion and protection – while Prince George’s smile shows his ‘shyness’ and ‘special bond with his father’. 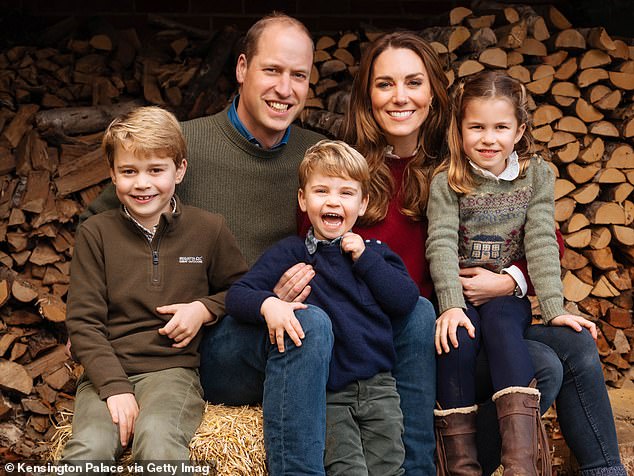 Earlier this week, the Duke and Duchess of Cambridge’s Christmas 2020 card featuring their three children Prince George, Princess Charlotte and Prince Louis, was shared online by a royal fan

Where will the royal family spend Christmas?

Charles and Camilla: Understood to be spending it alone at their home of Highgrove but will see Queen and Phillip ‘at some point’ during the holidays.

They will also see Camilla’s children Tom Parker Bowles and Laura Lopes at some point.

Prince William and Kate Middleton: Could spend Christmas at Anmer Hall, Norfolk or  with the Middletons in Berkshire.

The Wessexes: Prince Edward and Sophie are likely to spend Christmas at their home of Bagshot Park in Surrey.

The Yorks: Prince Andrew and Sarah Ferguson are likely to spend Christmas with Princess Eugenie and Princess Beatrice, as well as their husbands Jack Brooksbank and Edo Mapelli Mozzi. They may spend Christmas at the Royal Lodge in Windsor.

Princess Anne: The Princess Royal may spend Christmas with her children Zara Tindall, who is expecting her third child, and Peter Philips and their families on their estate of Gatcombe.

Prince Harry and Meghan Markle: The Sussexes are spending Christmas in California.

The picture, believed to be taken at their Amner Hall residence in Norfolk had a sweet message addressed to the NHS inside.

The sweet family snap, which shows the group sitting on haystacks in front of firewood was officially released by Kensington Palace yesterday, but was leaked online last week.

The card is addressed ‘To all the amazing NHS staff,’ with the message: ‘Wishing you a very Happy Christmas and New Year’.

‘This pose signals the tightest family unit, with the earthy, woody tones of their background and outfits hinting that William and Kate might be happiest in the kind of natural, simple environment that they opted for when they were first married and went to live in Anglesey in simpler, non-sumptuous surroundings,’ she explained.

‘It suggests a lack of change from the couple since the idyllic and more private days of their marriage.

‘The confident body language signals in this group pose come from one end, with both Kate and Charlotte sitting upright, throwing direct and almost (in Charlotte’s case) challenging eye-gazes at the camera.

‘This level gaze looks the most royal, too. Kate looks like the undisputed backbone of the family unit,’ she added.

‘She has one brow raised at the outside edge in what looks like a gesture of ironic amusement, as though she gets that the photographer is pulling stunts to make the boys laugh.

‘William seems to acknowledge that his wife is his rock here, leaning in towards her, wearing a smile that involves a tight top lip and puckering of the brows at the bridge of the nose to suggest suppressed delight at being supporter and back-seat protector of his family group.