Dame Harriet Walter enjoys being a pain in the arse. In her new television drama, she plays a recalcitrant grandmother who has made two suicide attempts, and is now being plonked in a luxury retirement village on the Gold Coast where her daughter, a specialist in palliative care, can keep an eye on her. “One day, you’re going to come in here and find me dead,” she mutters, facial muscles working, hatchet-faced.

Walter is relishing the black comedy of The End – a Foxtel and Sky Atlantic co-production about three generations of a family grappling with life and death issues, and rubbing each other up the wrong way. 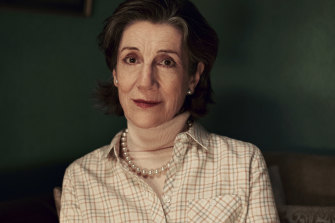 “When you’re over a certain age,” she says, smiling, “most of the characters you play are rather immovable objects, often against the irresistible force of young love. Edie has a possibility of change. You understand something of why she’s bitter and twisted.

“She has locked herself up from early motherhood, and now she’s suddenly being encouraged to smoke dope, let her hair down, have an affair, flirt. She increasingly finds reasons why she wants to stay alive, but she’s too proud to admit it. Nobody I knew was like this woman. I couldn’t think, ‘I’ll do it like my auntie.’”

Samantha Strauss, the Australian writer of the 10-part drama, whose own grandmother was the inspiration for Edie, found Walter’s sense of adventure breathtaking. “Harriet is fearless,” she says, “and so much fun. She feels to me timeless. She can be a surly 16-year-old one moment and an overbearing, critical mother the next.”

At the core of The End is assisted dying, a subject Walter thinks should be better aired. “You don’t want to dwell on it, but what you dread is having to make a decision at a critical moment when you’re already befuddled by grief and pain. You should think about these things while you are still healthy and able.” She has made a living will – “in a very drafty form” – and intends to keep reviewing it. “It’s something we all need to take on.”

In The End, a young husband is at loggerheads with Edie’s doctor daughter (played by Frances O’Connor) for confiscating the fatal dose of Nembutal he has obtained for his terminally ill wife.

“In the past, you could just silently help somebody and nobody needed to know,” says Walter. “But one Harold Shipman [an English general practitioner and serial killer] means everybody has to be treated like a potential criminal, so we have a law that protects us from the worst that could happen – and in most cases, that works against the kindest thing you can do.”

WHAT The End
WHEN 8.30pm Tuesday, Fox Showcase and Foxtel On Demand