The West Australian government has spent at least $1.47 million fighting the myriad of court actions brought against it by Queensland billionaire Clive Palmer and anticipates spending a further $3.25 million over the next two years for ongoing cases.

Budget papers tabled in WA parliament on Thursday revealed the extent of the government’s legal costs in the State Solicitor’s Office to counter actions from Mr Palmer, such as a $28 billion damages claim over Pilbara iron ore interests, a defamation case against the premier, and a challenge of domestic ‘hard border’ controls. 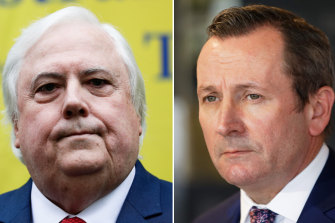 The West Australian government could be on the hook for about $4.7 million in legal fees in its legal battles with Queensland billionaire Clive Palmer.Credit:Alex Ellinghausen/Trevor Collens

The state successfully defended Mr Palmer’s High Court constitutional challenge over border controls in November but is still gearing up for a defamation case against Premier Mark McGowan which includes a cross-claim from the politician.

Mr Palmer is suing the premier because of comments like one which labelled him an ‘enemy of the state’ which he claims brought him hatred, ridicule, and contempt.

The defamation case is listed for a three-week trial starting on January 31 in the Federal Court but former WA Chief Justice Wayne Martin has been appointed as a mediator to try and resolve the matter beforehand.

Mr Palmer has also flagged the potential of having another legal tussle over WA’s hard border measures and arguing the requirement for travellers from high-risk Australian jurisdictions into the state to be vaccinated is unconstitutional.

The mid-year budget review and a pre-election snapshot of the state’s finances were not forthcoming when it came to how much the state was spending in the legal arena against Mr Palmer.

But Thursday’s budget revealed about $1.78 million of the future legal costs is expected to be taken up by the spat over Mr Palmer’s claim for $28 billion in damages.

WA parliament rushed through the Iron Ore Processing (Mineralogy Pty Ltd) Agreement Amendment Act 2020 in August last year to block the damages claim, with the legislation now the subject of a High Court case. Mr McGowan has claimed the new law was necessary given paying out $28 billion would bankrupt the state.

The matter was heard over four days in June and a judgement has been reserved.

Thursday’s budget papers included a note that the Act was ‘likely to withstand scrutiny by the High Court’.

Mr McGowan was scathing of the federal government last month for spending more than $1 million of taxpayers’ money to intervene in the first High Court challenge of state border restrictions.

The federal government withdrew from the case, which was ultimately won by the states, but not before spending $910,660 on solicitors and external counsel and also giving $40,995 to a company of Mr Palmer’s.

Mr McGowan said the public should be unhappy with taxpayer money being spent by the federal government to subsidise Mr Palmer and fight the case.