Home » Lifestyle » Love Island 2018 couples still together: The series 4 couples who made it work away from the villa and those that didn’t including winners Dani Dyer and Jack Fincham

Love Island series four was full of highs and lows – but it appears most of the couples who appeared on the show have since called time on their romances.

From Zara McDermott and Adam Collard, who fans predicted wouldn't last, and Megan Barton Hanson and Wes Nelson, who moved in together before ending their romance, there are now no couples who remain together after the summer of love.

Some ended their romance quicker than others, with Samira Mighty and Frankie Foster splitting just weeks after she left the villa, and even winners Dani Dyer and Jack Fincham confirming their breakup.

It's been a shocking start to 2019, with three more couples calling time on their romance – with Wes and Megan, Kazimir Crossley and Josh Denzel and most recently Zara McDermott and Adam Collard revealing they are no longer in relationships.

If you're struggling to keep up with all the islanders' gossip, here's all the details on who is still together – and who have recently called time on their romances…

Dani and Jack took the crown for Love Island series four, after getting together on the very first day.

The couple had met each other's families and have even moved in together in a stunning Canary Wharf apartment before getting a pet puppy together.

Jack had admitted on numerous occasions he wanted to marry Danny Dyer's daughter in the future and Dani even joked they're engaged during a radio interview after she posted a photo of herself wearing an engagement ring.

In December Dani confirmed the pair endured a brief split on social media, revealing: "It's been an incredible six months and we will always have a place in our hearts for each other, but sadly we've come to the realisation that it's not meant to be longterm." 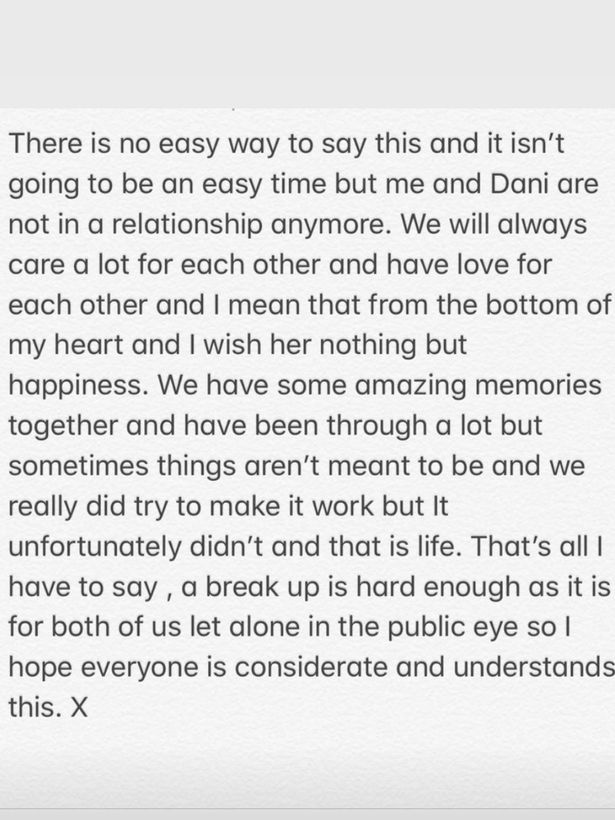 Jack confirmed for a second time that he and Dani have split on April 3, in a statement reading: "There is no easy way to say this and it isn't going to be an easy time but me and Dani are not in a relationship anymore.We will always care a lot for each other and I mean that from the bottom of my heart and I wish her nothing but happiness.

"We have some amazing memories together and have been through a lot but sometimes things just aren't meant to be and we really did try and make it work but unfortunately didn't and that is life.

"That's all I have to say, a break up is hard enough as it is for both of us let alone in the public eye so I hope everyone is considerate and understands this. X"

Wes was smitten with Megan as soon as she confessed her feelings to him in the villa.

The pair went from strength to strength since leaving the series, with the nuclear systems design engineer even moving in to Megan's Southend flat.

However, the pair have since confirmed their split after Wes' appearance on Dancing On Ice – with blonde beauty Megan confirming they had ended their relationship stating he "didn't love her" anymore.

There have since been several rumours of the pair reuniting following his runner-up status on Dancing On Ice, though he has remained adamant they are just friends.

When Kaz and Josh first got together, it sparked chaos in the villa after the LadBible presenter ditched former partner Georgia Steel for Kaz when the boys were moved into Casa Amor.

But once the drama died down and the pair grew closer, Josh and Kaz were dubbed ‘smug’ by viewers as well as their co-stars for being so loved up throughout their time in the villa.

However, just weeks after castmates Megan Barton Hanson and Wes Nelson called it quits, as did this couple – with Kaz stating on Instagram: “Sometimes things don’t go they way you planned, but you have to be grateful for the journey.

"Thank you for everything especially showing me how to love myself again.”

While Sam secretly had eyes for the loud and flirtatious 20 year old from the start, he was first coupled up with Samira and then Ellie Jones.

It wasn't until Josh and Georgia split that Sam had an opportunity to swoop in, and, after being forced to break up in the villa weeks later, Sam refused to recouple, resulting in them both leaving the island.

The duo appeared more loved up than ever back in the UK, and even moved in together into a flat in Essex.

However, on 17 October 2018, Sam and Georgia both took to Instagram to confirm their split.

Adam Collard, 22, earned himself a bit of a bad reputation from the get-go in the Love Island villa.

After recoupling with Kendall Rae-Knight, the Personal Trainer then jumped ship with Rosie Williams before making a sly move with Megan Barton Hanson.

Then he proclaimed to have found 'the one' in Zara McDermott …. until she was dumped from the island.

But after a brief fling with Darylle Sargeant in Casa Amor, Adam realised Zara was indeed the girl he wanted to be with.

However, on Monday 11 February it was confirmed that the duo's romance had sadly come to a close.

Speaking exclusively to OK! online, a source said: “The pair of them have been arguing a lot so it’s for the best that they’ve split.

“Adam has already gone back to Newcastle and has moved out of their flat. Zara will likely also move out now too in the next few days.”

Laura Anderson and Paul Knops called time on their romance last year. The 31 year old hunk met Laura, 29, on the most recent series of Love Island, finishing in second place.

But less than two months after being crowned runners up to Dani and Jack, the pair announced their split.

Speaking to The Sun Online about the split, Paul said: "It was my decision to split from Laura – I said to her let’s make it a mutual decision so we could both move on and she didn’t get hurt.

"We weren’t compatible for each other. I knew I had to be 100 per cent sure about it because you know – the next person you’re with could potentially be your wife; you don’t want to be unsure about it.”

Let's hope this year's contestants are luckier in love!