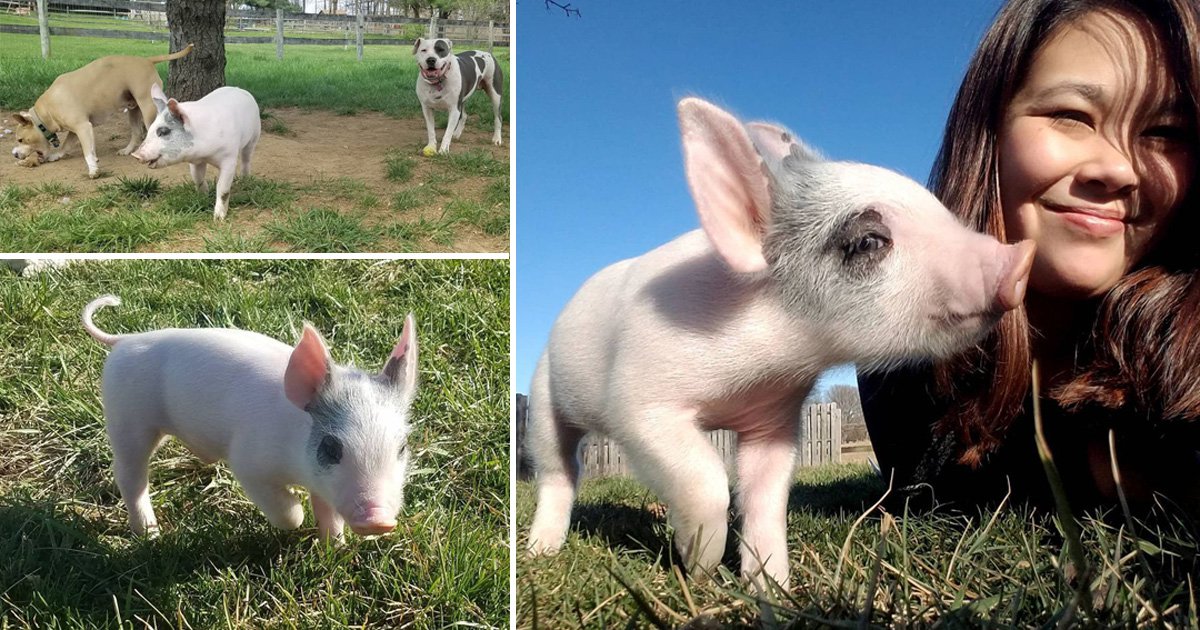 A pig born with a rare medical condition that caused him to shake uncontrollably is now thriving and has become a social media sensation.

Floppy – who was given just one week to live – is cared for by Chelsey and Wesley Weaning, both 28, in West Virginia, US.

The Hampshire breed animal was born with a medical condition informally known as ‘Shaking Head Syndrome’. It isn’t common among pigs but can lead to early death and starvation.

However, after being taken in by his owners, the brave pig who is now one and a half years old, is now flourishing despite his diagnosis. Under the loving care of his owners, Floppy’s shaking has become less noticeable as he has gotten older.

And now, Floppy is a star with over 7,500 Instagram followers.

Users regularly see photos and videos of life with his family, including his best friends, Chelsey’s pitbull dogs, Kai and Kona.

A recent video saw Floppy enjoying belly rubs from his owner and the post received over 1,000 likes and dozens of comments.

‘Floppy you’ve got the life!’ wrote one follower.

‘Floppy is king!’ said another.

‘Floppy was born into a litter of nine piglets at my sister-in-law’s farm in January 2020,’ his owner Chelsey explained.

‘His head shook uncontrollably and he couldn’t nurse on his own. After consulting with the vet, they determined Floppy had a condition informally known as shaking head syndrome, which is similar to an uncontrollable tremor.

‘They stated it was the worst case they had seen and estimated Floppy would only live to be a week old.’

Chelsey continued: ‘The options were to allow him to live out the week or humanely euthanize him.

‘My sister-in-law struggled to make a decision, as the thought of euthanasia was unbearable. My husband and I offered to take Floppy into our home and nurse him by hand and allow him to live out his life, however short it may be.

‘I had no experience with pigs but have a big heart for animals so I was up for the challenge.’

Chelsey and her husband fed Floppy a bottle every three hours and created his own living area in  their basement.

He now only shakes when he’s anxious, excited or startled by something.

‘A year and a half later and he still lives in our house and weighs 500 pounds,’ Chelsey said.

‘He has his own bedroom and loves to snuggle in his blankets. He also has a close relationship with Kona, who took on a mother role for Floppy when he was younger and protected him from harm.

‘Even though he’s three times the size of her now, they still have a great relationship and will often run around our back garden together or lay under our pine tree.’

While Floppy is slightly needy, his owners say he is a loving and sociable pig and loves the camera.

‘Floppy loves his mom, that is for sure,’ Chelsey added. ‘He loves taking selfies together and can recognise himself in the mirror when taking pictures.

‘He does not like to be alone, but always wants to have someone with him and will follow me around the yard without question.’

Floppy is also house trained but has become accustomed to a luxury life.

Chelsey said: ‘Pigs are smart and Floppy will tell you what he wants and what he likes, you just have to be willing to listen.

‘He is now [so] accustomed to air conditioning, snacks and a cozy bed that he hates anything else.

However, it hasn’t always been simple and Chelsey admits that the pig can sometimes act just like a toddler.

‘Pigs always need attention, something to stimulate their brain, and they want more attention so when Floppy is not getting attention, he can make big messes in the house,’ Chelsey noted.

‘He has flipped our kitchen chairs, the living room ottoman and often his food bowl, leaving me to sweep up the mess.  When he was younger, he also decided he didn’t like our kitchen floor and chewed a big hole in it! We had to replace our entire kitchen floor.’

People are surprised when Chelsey tells them she and her husband have a pet pig living in her home but Floppy has changed their lives. ‘Everyone who meets him, loves him. He is so gentle and kind, it is impossible not to love him,’ she explained.

‘He has changed my life in so many ways, he’s the thing I never knew I needed, but never want to lose.’

Send us an email at [email protected]