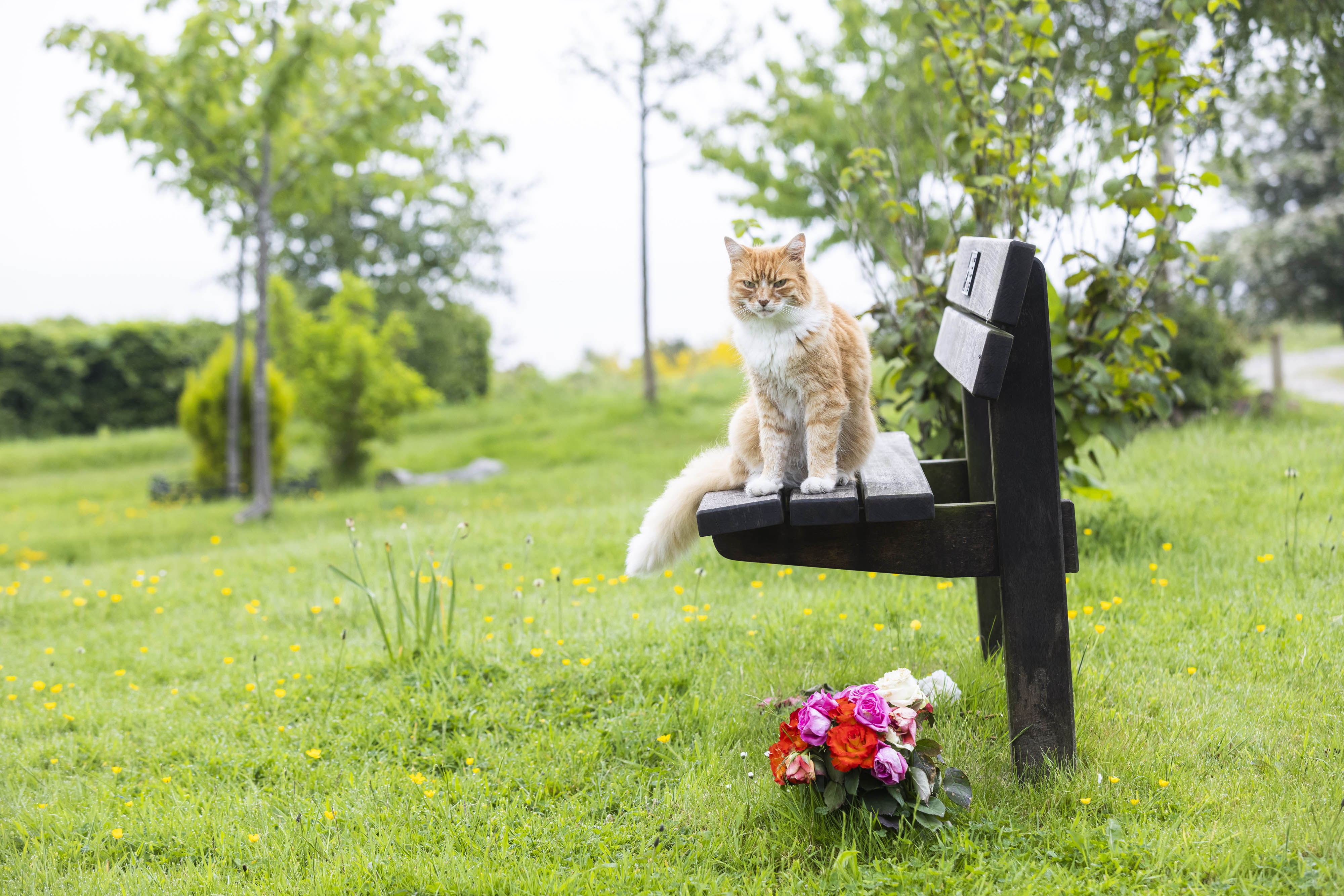 Ever thought about what your cats get up to when they head out after wolfing down breakfast?

Christina Jones and Stuart Hague had no idea their cat Paddy had basically given himself a full-time job working as a comfort pet to mourners – until they thought he’d gone missing.

After putting up posters, they discovered Paddy heads out every day and spends his time attending funerals or just keeping visitors company as they think about their loved ones at Co-op Funeralcare’s Mayfields Remembrance Park in Eastham, Merseyside.

Then at 6pm each night, he heads home for dinner and curls up to get some rest.

Christina tells Metro.co.uk: ‘We say Paddy is off to work because it really is like he has a job.

‘He’s such a gentle cat and he’s helped so many people over the years. It’s really lovely.’

Christina adopted Paddy 10 and a half years ago when she heard about some kittens at a local farm that needed rescuing.

Sadly, Max went missing after about a year and the family went on to move to their current house, close to the memorial park, where they adopted three more cats.

Four years ago, they noticed Paddy hadn’t come home and after three nights, began to get worried. They put up posters and tried knocking on doors to find him.

On the fifth day, they discovered Paddy had actually been leading a bit of a secret life for years.

Christina says: ‘A gentleman from the memorial garden called me and said “I think we have your cat. He actually comes here quite a lot.” I was just on my way to work so I stopped at the garden and called is name and he ran straight towards me.’

Staff told Christina that Paddy had been coming to the park every day for years, sitting in on meetings, patrolling the funeral room and comforting people who visit.

A few years later, someone working at the funeral centre posted on Facebook trying to get in touch with Paddy’s owners because he had touched so many lives and they wanted to write something about him.

‘It was then I started hearing all the stories about what he’s been doing. He turns up at the moment where relatives seem to need it. He walks in with funeral processions. When he’s not helping, he makes himself comfortable in their office and they will feed him.

‘It really opened my eyes about how popular he is and how many people know him,’ Christina says.

Most days, Paddy does the five minute walk home from his job himself but sometimes gets caught up in keeping others company, so if he’s not back by 8pm, Christina will go down to the park to bring him home.

‘He’s never anywhere else,’ she says.

The staff at the memorial park adore the ginger cat and appreciate everything he has done for those who use it.

‘If he’s ill or doesn’t go some day, the staff are so worried about something happening to him.

‘The local community love him too. He appears on Facebook groups and stuff sometimes and I love reading the comments on there.

‘He is such a gentle cat.

‘People even come in now and request that he comes to a funeral, but of course, you can never quite predict.’

To recognise Paddy, Christina and Stuart entered him in the Cats Protection National Cat Awards, organised by the UK’s largest cat charity and sponsored by Purina.

Paddy is now one of three finalists in the Most Caring Cat category. Winners will be selected by celebrity judges – comedian Bob Mortimer, funnyman Russell Kane and actress Tuppence Middleton, while the fourth category will be announced by entrepreneur Deborah Meaden following a public vote.

After category winners are announced online on Thursday 5 August, an overall winner will be selected as National Cat of the Year by a celebrity panel and announced on Thursday 12 August.

‘Even getting his photos taken for the awards just showed what he’s like,’ Christina said.

‘The photographer arrived and he was in the office but he just followed him out on command and jumped on a bench to pose.’