Sharing her support. While Mila Kunis was on hand to present at the 2022 Oscars, she made sure to vocalize her support of Ukraine amid the Russian invasion.

See What the Stars Wore to the Oscars Red Carpet

“Recent global events have left many of us feeling gutted yet when you witness the strength and dignity of those facing such devastation, it’s impossible to not be moved by their resilience,” Kunis, 38, said while presenting during the Sunday, March 27, ceremony. “One cannot help but be in awe of those who find strength to keep fighting through unimaginable darkness.”

Kunis — who walked the red carpet with husband Ashton Kutcher — introduced Reba McEntire‘s performance of “Somehow You Do” from Four Good Days, lauding its message of hope and perseverance. Following the 67-year-old Reba alum’s number, the Oscars planned a moment of silence. 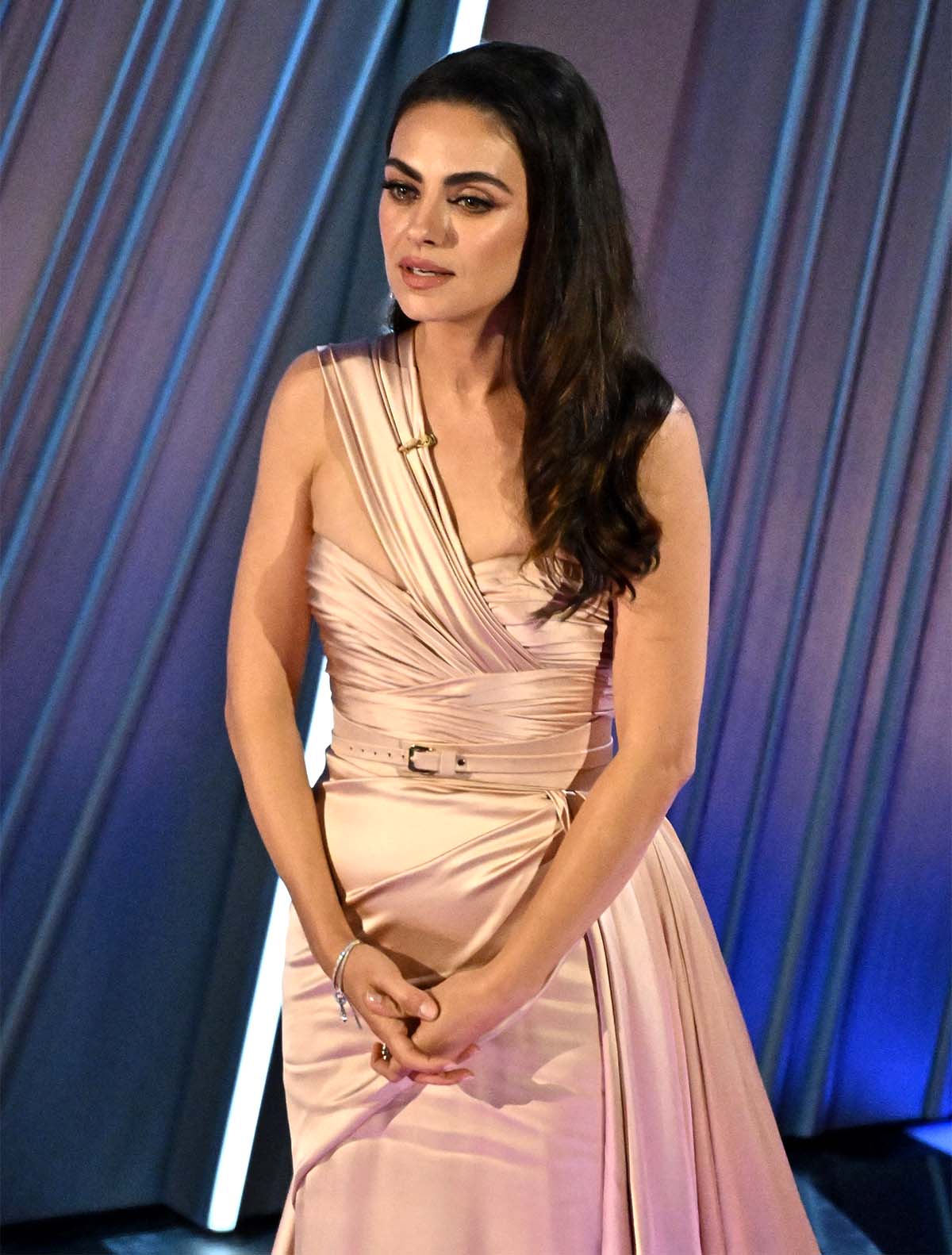 “While film is an important avenue for us to express our humanity in times of conflict, the reality is millions of families in Ukraine need food, medical care, clean water and emergency services,” the statement read, sharing further ways viewers can help the cause. “Resources are scarce, and we — collectively as a global community — can do more.”

The That 70s Show alum grew up in Chernivtsi, Ukraine, with her immediate family before they relocated to Los Angeles in 1991.

Everything to Know About the 2022 Oscars

“We were the last of my family to migrate,” Kunis told Maria Shriver during an interview for Shriver Media’s The Sunday Paper newsletter on March 13. “When we came to the States, I was 7-and-a-half [or] 8 [and] I very much have always felt like an American. People were like, ‘Oh, you’re so Eastern European.’ I was like, ‘I’m so L.A.! What do you mean?’”

After Russian troops began invading several Ukrainian cities in February, the actress soon saw a shift in her mindset.

“And then, this happens — and we have friends in Ukraine, Ashton [Kutcher, my husband] and I went and met [President] Zelenskyy three and half years [ago] — this happens and I can’t express or explain what came over me,” the Bad Moms star told the 66-year-old philanthropist. “But all of a sudden I was like, ‘Oh, my God, I feel like a part of my heart just got ripped out.’ It was the weirdest feeling.”

Kunis and the Jobs actor, 44, have been vocal about aiding the democratic country amid the war by launching a GoFundMe campaign to help refugees, which has raised over $30 million, and teaching their children — daughter Wyatt, 7, and son Dimitri, 5 — about the global situation.

“Mila and Ashton have set up a kindness club for their children,” a source exclusively told Us Weekly earlier this month. “Wyatt and Dimitri know something is wrong in Ukraine and that people and children are suffering. They’ve heard that from their parents and want to help.”

Kunis — who wed the Iowa native in 2015 — has even made it a point of pride to teach the elementary schoolers about their heritage.