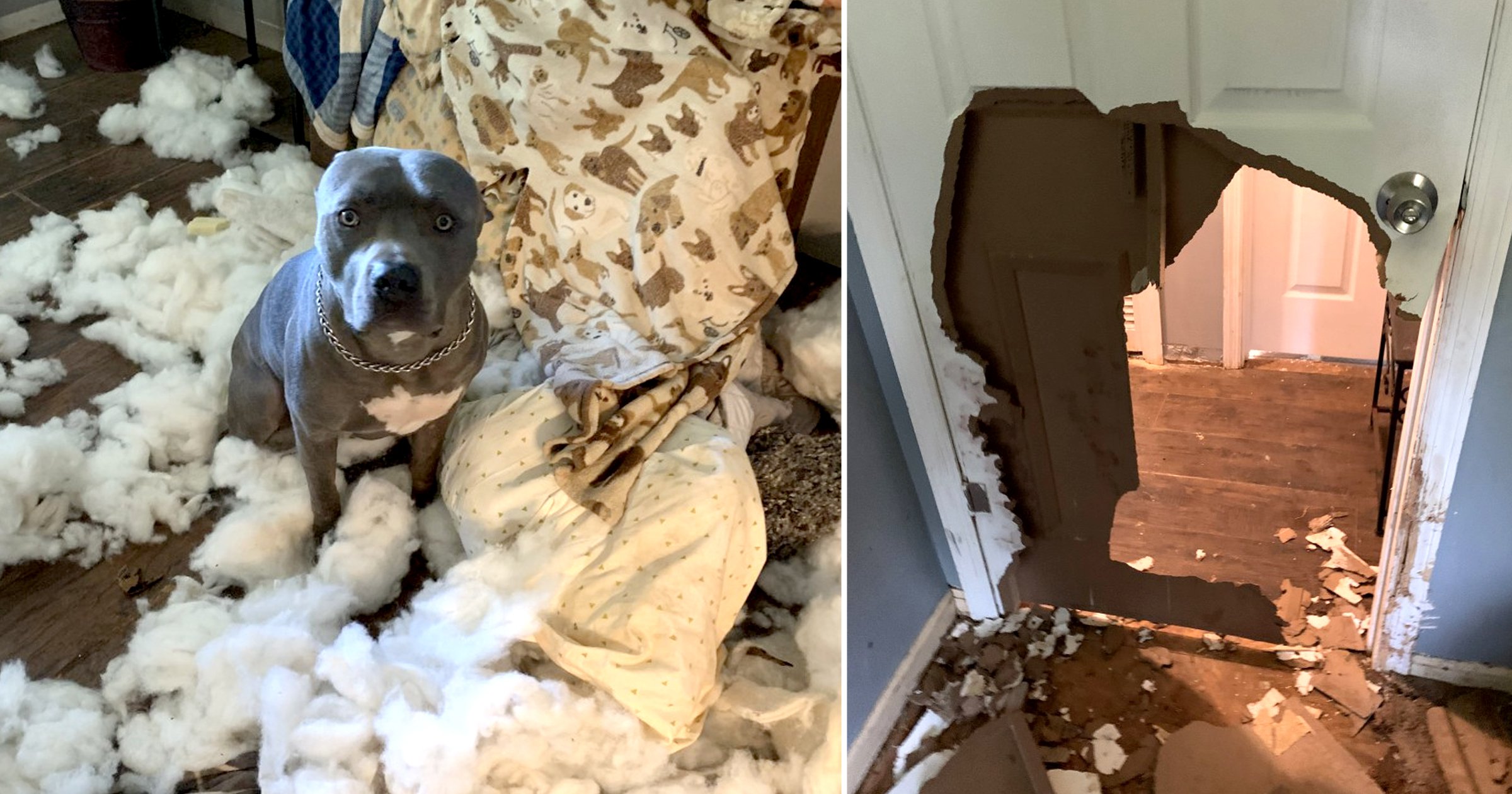 A dog that was left home alone destroyed the house so badly, his owner thought there had been a burglary when they returned.

The pet dog completely destroyed a sofa and broke down a door while his owner was at work.

Vickie Shelton was shocked to come home on April 24 and see her couch entirely destroyed, with bits of fluff scattered all over her floor.

The 51-year-old from Tennessee, US, said at first she thought her home had been robbed and vandalised, but soon she realised it was the work of her two-year-old dog, Bo.

Vickie said: ‘We’d only had the couch for four months when it all happened.

‘Bo sleeps on the couch a lot, that is definitely his domain. He loves it.

‘I was at work, and I was getting alerts from my pet camera that something was happening, but I thought it was just Bo being Bo. Never in a million years did I think he was destroying my couch. 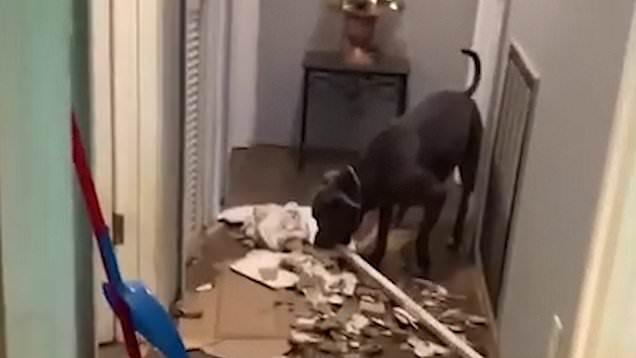 ‘I got home that afternoon and the dogs were greeting me at the door. I took a few steps inside and started seeing this white fluff everywhere.

‘Once I got to the living room, that’s when I saw the couch… My first thought was that I had been robbed and vandalised.

‘But then I saw the TV on the wall, and I thought, well why would they tear the couch up and leave the TV?

‘Bo then sits down in the middle of the mess, wagging his tail. He was very happy with himself. That’s when it all clicked. I couldn’t believe it.

‘It took over two hours to clean it all up, and there were six huge plastic bags full of fluff.’

The next day, Vickie decided to keep Bo in her son’s room while she was at work to prevent the same thing from happening again, but little did she know this was also a recipe for disaster.

The determined pup managed to chew his way out of a wire crate and break down the door to escape.

She said: ‘I put the crate in my son’s bedroom and closed the door.

‘I turned on the TV with calming sounds, put on the fans, put his toys in with him. I thought he’s going to have a good day.

‘When I came home from work, there he was at the door. I thought “Oh no, this cannot be good”.

‘There was a massive hole in my son’s door, and he had chewed his way through the crate.

‘I panicked because I thought he had cut his mouth to pieces, so I took him to the vet. But he was totally fine.’

During his trip to the vet, Vickie explained Bo’s antics and was told that the dog was dealing with severe separation anxiety.

This is a concern for many pet owners who’ve spent more time than usual with their pets in lockdown. Now they’ll need to adjust to that changing again.

Since seeing the vet, Vickie’s been giving Bo a low dose of ‘puppy xanax’ to ease his anxiety.

Bo is now coping better and has achieved online fame after Vickie shared the photos of his handiwork online – which racked up over 10,000 likes, shares and comments in a matter of hours.

Vickie adopted Bo at four weeks old after he was found dumped in a cardboard box in a supermarket carpark with his siblings.

She added: ‘Sadly, one of the puppies had already died. A young couple were parked next to me, and said if we took the male they would take the female.

‘Bo was an unexpected gift, but it was just meant to be. I couldn’t imagine life without him.

‘He has definitely got his own unique personality and I wouldn’t trade him for the world.’