STAYING in is the new going out thanks to lockdown and now MoneySavingExpert has revealed the best day to get a takeaway bargain from your favourite chain restaurant.

The consumer site has revealed which days are best to get a bargain burger or price-friendly pizza from some of your favourite chains. 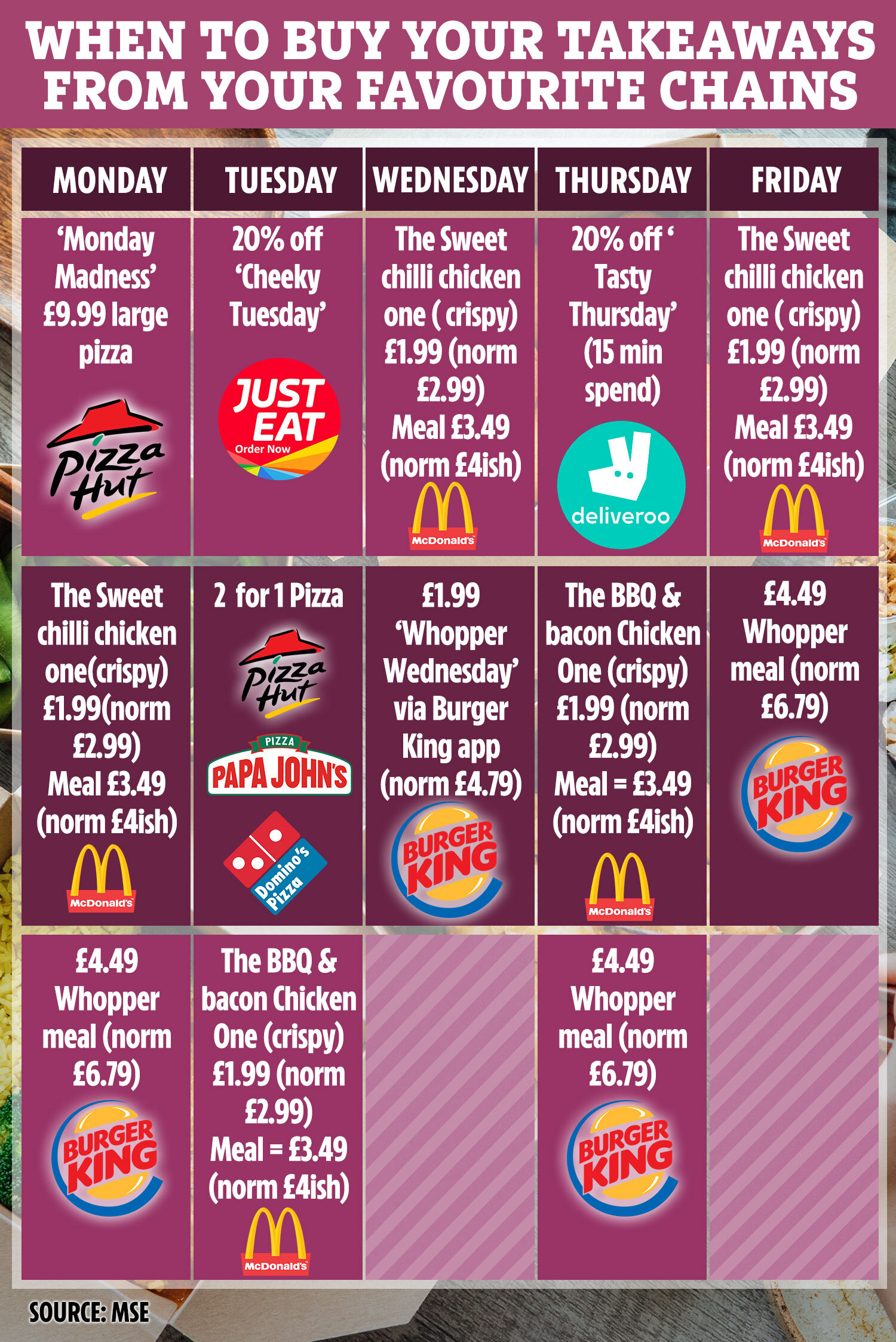 If you’re looking for a weekend treat, you might be disappointed as there are less promotional offers to be bagged over these days, MoneySavingExpert says.

But you can munch for less during the weekdays, which is when more offers are available.

Take note that you might not be able to use other promotional codes on top of these offers, and you should factor in delivery costs.

We’ve got in touch with all the chains and takeaway sites listed to check the deals and will update you with more information as soon as we can.

Here’s when the best deals are to be had from Monday to Friday.

What better way to kick the Monday blues than with lashings of cheese and dough.

And it looks like pizza fans should circle the start of the week in their diaries as one of the best days to take advantage of a Pizza Hut deal.

You can get a large pizza for £9.99 as part of the chain’s “Monday Madness” deal.

If you’re more of a Maccies fan, then you could make the most of the restaurant’s Wrap of the Day offer.

As part of the deal you’ll get a drink, side and a Whopper burger, which is a beef patty topped with tomatoes, lettuce, mayo, pickles, ketchup and onions sandwiched between a sesame seed bun.

If you head over to Just Eat on Tuesdays, you can get 20% off as part of it’s “Cheeky Tuesday” deal.

You’ll be able to get the money off at selected restaurants  if you spend at least £15.

Remember, you’ll still have to pay for delivery costs though which could vary depending on where you’re ordering to.

And there’s a good deal to be had at Pizza Hut, Papa John’s and Domino’s, where you can get two pizzas for the price of one.

Domino's told The Sun that as well as its Two For Tuesday deal, it offers a "range of local deals throughout the UK" that you can find online or via its app.

Over at Maccies, the Wrap of the Day is The BBQ & Bacon Chicken One.

To get you through the last half of the week, head to McDonald’s or Burger King to get your meal deals.

On Wednesdays, the Wrap of the Day at Maccies is The Sweet Chilli Chicken One again.

At Burger King, you can get a Whopper burger for £1.99 as part of the chain’s Whopper Wednesday promotion.

If you order through Deliveroo on this day, you’ll be able to get 20% off selected takeaways as part of the takeaway delivery service’s Tasty Thursdays offer.

You’ll have to spend over £15 to get the money off.

And you’ll have to pay for delivery too.

Meanwhile at Maccies, the Wrap of the Day (like on Tuesdays) is The BBQ & Bacon Chicken One.

Remember, Burger King is flogging its Whopper meal for £4.49 instead of £6.79 on Thursdays too.

How to get discounts and deals

KNOWING what the best available offers are for your favourite takeaways can be a little confusing.

Here's our top tips for keeping on top of discounts and deals:

Check out voucher websites before you buy

Save your receipts and bus tickets for discounts

You can bring in the weekend in style with these deals from McDonald’s and Burger King.

As like any day of the week apart from Wednesdays, you can get a Whopper meal from Burger King for £4.49 instead of £6.79.

The Queen has raked in rental profits from eight Maccies branches and seven Nando's on her land.

And here's how to make your own McDonald's, Greggs, KFC and Nando's classics at home.

Burger King has recently changed its logo – but some fans think it looks the same as the chain's 90s version.