Attorney-General Christian Porter and Defence Minister Linda Reynolds will retain positions in cabinet in a reshuffle aimed at giving the government more stability as it battles a political storm over the treatment of women in Parliament.

Prime Minister Scott Morrison also offered a public thanks to former Liberal staffer Brittany Higgins as he fought to recover from a politically devastating series of allegations about sexual assault and harassment in Parliament House. 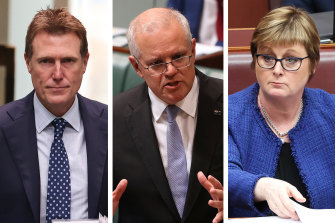 Ms Higgins sparked a national wave of anger about the treatment of women after she alleged she was raped by a colleague in Senator Reynolds’ office in 2019. Mr Morrison plans to keep Senator Reynolds in cabinet despite blasting her “disgraceful” response to news of the rape.

Vowing to do everything he could to stop disrespect for women, Mr Morrison spoke on Thursday night just hours after Ms Higgins challenged him to act on allegations his staff were briefing journalists about her loved ones.

“Now I may not have always got it as well as people would like me to, but I assure you I’m doing everything I can to understand it as best as I can,” he said.

“And I think many, many people in our country and doing that now, because this has started – and thank you, Brittany, for that — the conversation we haven’t been having.”

The public comments marked another stage in Mr Morrison’s bid to prove to Australians, and especially women, that he was listening to them after weeks of debate about rape, sexual assault, discrimination and inequality.

But Ms Higgins took on the Prime Minister over his response to her allegations after weeks of claims that his staff backgrounded journalists against her or those close to her.

Hours after Mr Morrison told ABC Radio on Thursday morning that his chief of staff, John Kunkel, had not received any complaint about backgrounding, someone contacted Mr Kunkel about the matter.

Mr Morrison told Parliament the information came from a “primary and direct source” and led to a process with the Department of Finance to consider complaints against staff within his office.

In a move that escalates pressure on the Prime Minister and his office, Ms Higgins wrote to him and released the letter saying journalists from news.com.au, The Daily Telegraph and Channel 10 had made her aware about backgrounding against her partner.

“To my knowledge, this was being done by staff within the Prime Minister’s media team,” she wrote.

Days after the sacking of a Liberal adviser for filming himself in a solo sex act in a Liberal MP’s office, Finance Minister Simon Birmingham said he was taking “all steps possible” to ensure there were consequences for anyone found to have done the wrong thing.

But the government is waiting for staff to volunteer themselves or identify others involved in sharing the images.

The reshuffle, expected within days, will move Mr Porter out of the Attorney-General’s post over concerns of a conflict of interest while he takes defamation action against the ABC over its reporting of an alleged rape, which he denies.

While he could remain Industrial Relations Minister, another option is to transfer him to the employment portfolio held by Michaelia Cash so she can take his dual portfolio in a job swap, limiting other changes.

An alternative is a similar swap with Communications Minister Paul Fletcher.

A key factor is concern in the government that dropping Mr Porter from cabinet and the ministry would send a message that an accusation was enough for ministers to lose their job.

Mr Morrison commended Mr Porter in Parliament on Thursday on his work in his portfolio and has argued for weeks that it is not for the Prime Minister to judge the claim against him, saying it was a matter for the police.

Asked if he had full confidence in Mr Porter and Senator Reynolds, the Prime Minister told A Current Affair on the Nine Network on Thursday night that they would stay in cabinet.

“They will continue to play a very important role in my cabinet,” he said.

Asked if he would move them to different ministries, he said: “When I make judgements about those things I’ll announce them.”

Mr Morrison criticised Senator Reynolds over some of her response to the alleged rape in her office, saying it was “disgraceful” she called Ms Higgins a “lying cow” last month.

He also acknowledged that people in the government failed to give Ms Higgins enough support after the alleged rape in March 2019, even though they were seeking to help.

“But they were relying on the very processes that were not up to the job as well,” he said.

Mr Morrison told A Current Affair he was gaining a deeper understanding of the challenges for women and believed the country had to deal with the issues so women would not face the “daily humiliations and degradations” that included but were not limited to violence.

“Each and every day, it saps women in this country,” he said.

“And that’s what I’m hearing. And I need to keep hearing of because I need to understand that even more deeply than I believe I’ve been able to understand in the past month.”

“This is a Prime Minister who has an ear of tin, a heart of stone and a wall of concrete to shield him from the concerns of his fellow Australians. He is an angry man who has mastered the rare art of clenching a glass jaw.”

Labor education spokeswoman Tanya Plibersek questioned whether Mr Morrison’s tears in a press conference on Tuesday were “all an act” about the concerns of women given his angry response to a journalist moments afterwards.

She named rape victims Anita Cobby, Janine Balding and Eurydice Dixon as well as Hannah Clarke, who was murdered with her three children by her estranged husband.

“I remember all these women. We all do. It takes more than tears,” Ms Plibersek said.