The national broadband network is poised to pay millions of dollars in bonuses to its senior management, including highly paid chief executive Stephen Rue, despite its plans to cut hundreds of staff and a government crackdown on public service pay.

The $51 billion taxpayer-funded organisation will reveal its corporate plan on Wednesday but will not produce its annual report, which includes details of executive bonuses, until late October. 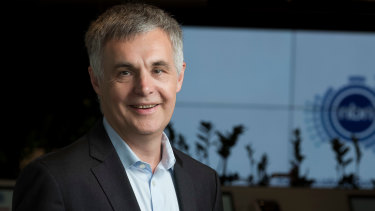 The Morrison government earlier this month leaned on the board of directors of Australia Post to veto more than $7 million of bonuses to its executive team as the nation faced a spike in unemployment amid the worst recession in more than 90 years following the global outbreak of COVID-19.

NBN Co typically pays hundreds of thousands of dollars in bonuses to key executives each year on top of their standard wages, with Mr Rue receiving a $1.7 million salary package in 2019 and an extra $828,000 in short-term incentives.

"In order to remain competitive and attract and retain critical talent to the organisation, NBN benchmarks senior executive remuneration against other telecommunications companies although the remuneration mix between fixed and variable pay is consistently more aligned to that of a GBE than any listed entity," NBN Co said in a statement.

Mr Rue revealed in July NBN Co was intending to make 800 people redundant out of its 6300-strong workforce by the end of 2020 as the rollout of the network completes. The job cuts were put on hold during the height of the coronavirus pandemic so the network could handle higher levels of demand from people using their home internet to work remotely.

In August, NBN Co said it had exceeded its corporate plan 2020-23 targets for the 2020 financial year, including connecting 230,000 more premises to the network than required. More than 11.7 million homes and businesses were ready to connect by June 30 and 7.3 million were connected.

The federal government put a freeze on pay increases for MPs, judges and senior public servants in April against a backdrop of rising unemployment across the country.

This week it urged staff at the ABC to vote to defer an imminent pay rise to show solidarity with other public servants, journalists in commercial media and the broader community making sacrifices during the recession.

Senior figures within the Morrison government are also infuriated at the decision of staff at the Australian Securities and Investments Commission to reject a pay pause, labelling the move greedy and insensitive at a time when pay rises for overworked staff at Centrelink and other agencies have been put on hold.

"Their continued refusal to answer any questions on their entertainment spend of almost $900,000 in just over a year wouldn't even fly amongst the Australia Post senior management team," she said.

NBN Co's board remuneration committee determines the payment of top executives at the internet broadband wholesaler, including the bonus structure.

It approved $11.5 million in salaries and bonuses last year across all key management personnel, up from $8.9 million in 2018. The short-term incentives totalled $1.7 million in 2018 and $2.14 million in 2019. This included payments made to outgoing executives, including former chief Bill Morrow.

But additional incentive payments and bonuses to other staff previously worth tens of millions of dollars are not outlined in the same way and instead fall under total staff costs. In 2016-17, NBN Co paid out $66 million in these bonuses across its 6000 staff.

NBN Co said in a statement responding to Senator Kitching's comments that it released several reports a year, executives regularly appeared before Senate committees, and the company responded to 220 questions on notice in 2019-20.

"NBN Co employees are accountable for corporate expenses they incur and are required to adhere to the company's expenses policy. Entertainment spend can include the cost of information briefings, roundtables, and regional events held for external stakeholders and community groups," the statement said.

NBN Co did not respond directly to questions about bonus pay for executives.

Get our Coronavirus Update newsletter for the day’s crucial developments at a glance, the numbers you need to know and what our readers are saying. Sign up to The Sydney Morning Herald’s newsletter here and The Age’s here.