At the time of the note unveiling, Governor Andrew Bailey said: “There’s something of the character of a nation in its money, and we are right to consider and celebrate the people on our banknotes.

“So I’m delighted that our new £50 features one of Britain’s most important scientists, Alan Turing.

“Turing is best known for his codebreaking work at Bletchley Park, which helped end the Second World War.

“However in addition he was a leading mathematician, developmental biologist, and a pioneer in the field of computer science. He was also gay, and was treated appallingly as a result. 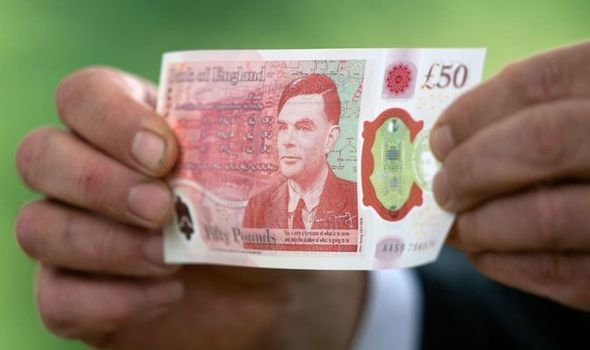 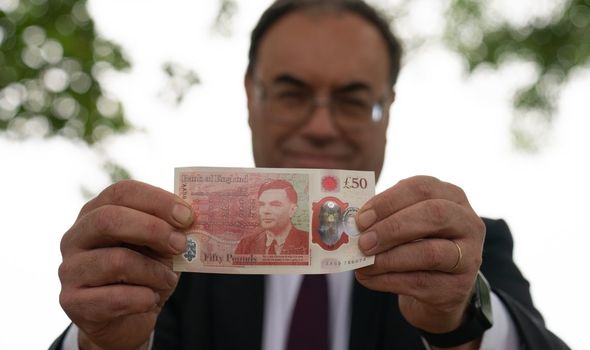 “By placing him on our new polymer £50 banknote, we are celebrating his achievements, and the values he symbolises.”

The new £50 note will feature the signature of Sarah John, the Bank’s Chief Cashier.

She said: “This new £50 note completes our set of polymer banknotes. These are much harder to counterfeit, and with its new security features the new £50 is part of our most secure series of banknotes yet.

Plastic notes have been replacing paper versions since 2016 when the new £5 was rolled out.

They have been designed to be more secure as well as being harder to rip.

The two windows and two-colour foil also make it more difficult to copy.

The new £50, featuring Alan Turing, will include a photo of him taken in 1951 by Elliott & Fry, alongside a table of a mathematical formula. 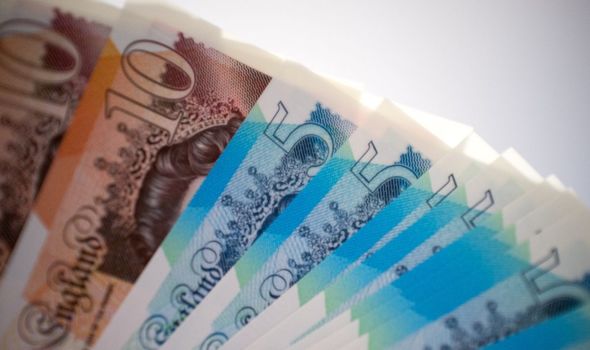 Underneath the picture of Mr Turing, there is a quote from him, reading: “This is only a foretaste of what is to come, and only the shadow of what is going to be.”

Back in 2018, the Bank of England asked members of the public to offer their suggestions for scientists who should appear on the notes.

They received 227,299 nominations of Turing during the six-week period.

Paper notes can still be used even after the new version has entered circulation. 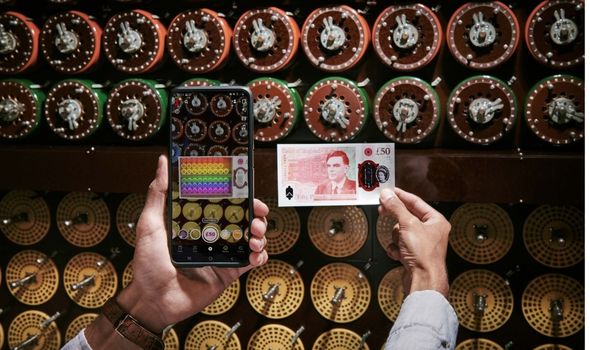 There isn’t a date as to when paper ones will be withdrawn but the Bank of England promised to give at least six months notice prior to them being phased out.

Director of GCHQ Jeremy Fleming said: “Alan Turing’s appearance on the £50 note is a landmark moment in our history.

“Not only is it a celebration of his scientific genius which helped him to shorten the war and influence the technology we still use today, it also confirms his status as one of the most iconic LGBT+ figures in the world.

“Turing was embraced for his brilliance and persecuted for being gay. His legacy is a reminder of the value of embracing all aspects of diversity, but also the work we still need to do to become truly inclusive.”

What’s more, Snapchat has partnered with the Bank of England to show the note in a new dimension through Snapchat’s AR technology.

Using the lens developed by the social media app, Britons can bring their new £50 to life.

Ed Couchman, Snap’s UK General Manager said: “The launch of the new £50 sees one of Britain’s most important figures honoured alongside the work he contributed to.

“Not only was Turing a key person in developing the industry Snap is part of today, but he also holds an important place in history for the LGBTQ+ community. We are proud to work with The Bank of England and The National Museum of Computing to honour Alan Turing during this year’s Pride month and hope this helps introduce a new generation to one of Britain’s most important pioneers.”

The new £50 note will be on display at The National Museum of Computing, where visitors will be able to interact with the note on Snapchat.