New Sydney Liberal MP Jenny Ware has used her first speech to thank the former party member who whipped the NSW branch into election turmoil over a legal challenge to its preselection process.

Ware, herself a captain’s pick of former prime minister Scott Morrison, and who defeated Liberal turncoat Craig Kelly to win the seat of Hughes, thanked ousted state executive member Matthew Camenzuli for his “courage” in being among those who “remained unwavering in seeking a democratic preselection process”. 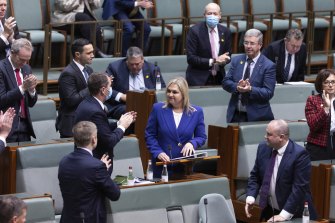 Member for Hughes Jenny Ware is congratulated by colleagues after delivering her first speech in the House of Representatives on Thursday. Credit:Alex Ellinghausen

Camenzuli’s attempted to have the legitimacy of the federal intervention in state preselections overturned through legal challenges but was defeated in a High Court decision days before the election was called in early April.

The federal intervention allowed the endorsement of sitting federal MPs Alex Hawke, Trent Zimmerman and Sussan Ley – protecting them from a preselection challenge and denying grassroots members a say.

The selection committee also used its power to endorse candidates in nine other NSW seats including Ware as the candidate in Hughes, Katherine Deves in Warringah and businesswoman Maria Kovacic in Parramatta.

Ware also used her speech to announce her mission to help rebuild the party to embrace women, after female voters abandoned the Liberals in droves at the polls.

“I do not accept that the Labor Party is the only natural home for Australian women,” she said.

Ryan, a paediatric neurologist, spoke about her upbringing in Melbourne’s well-heeled eastern suburbs, and her career in the medical profession.

“But the greatest challenge of our generation is climate change,” she told the House of Representatives.

The Climate 200-backed independent, who campaigned on a more ambitious emissions reduction plan, said strong leadership was crucial for an effective transition.

“In recent years the people of Australians have lost faith in our political system,” she said. “We stand on the precipice of a great opportunity.”

Ryan paid tribute to the Climate 200 movement as a funding powerhouse that gave an array of independent candidates the clout that led to their broad electoral success.

She said Australian democracy had dimmed in recent years before a “candle was lit” in the form of the Indi independents, Cathay McGowan, and now Helen Haines. 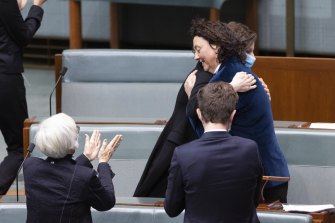 Member for Wentworth Allegra Spender congratulates Member for Kooyong Monique Ryan after she delivered her first speech in the House of Representatives on Thursday.Credit:Alex Ellinghausen

“By 2021 a people-powered coalition of the willing and the passionate had come to together listen to the voices of our electorates,” she said. “We built it, and the people came.”

Ryan assured her constituents she will remain independent.

“I’m honoured to serve as your representative, and I will never take that responsibility for granted,” she said. “To the people of the community, when our children ask what we do for our country, we will be proud to answer that we were the change that we wanted to see, and in doing so we changed Australian history.”