Victorian teachers who refuse to get a COVID-19 vaccination can take leave until the end of this term but will not be paid in any form after the 2022 school year starts.

As the state prepares for the nation’s widest-reaching vaccine mandate to come into effect from Friday, school principals are also seeking clarification from the Andrews government on what to do if unvaccinated teachers attend campus despite the edict. 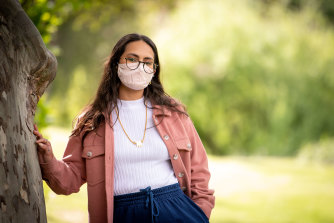 Primary school teacher Jasmine Geen is pleased all of her colleagues will be vaccinated.Credit:Eddie Jim

“It’s an incredibly challenging period and there is that bit of divisiveness across the entire community,” Victorian Principals Association president Andrew Dalgleish told The Age.

Liberal MP Neil Angus, who became the third member of State Parliament to be banned from attending until at least February, labelled the mandate a form of “medical apartheid” that was leading the state towards a “totalitarian regime”.

New data also shows nine construction sites have been closed down since the sector reopened with a vaccine mandate on October 5, while 45 sites have been fined between $1800 and almost $11,000 for breaching regulations.

About 1.25 million authorised workers – essentially anyone who is unable to work solely from home – were given two weeks to get their first jab by October 15 or have proof of a booking by October 22. On Thursday Health Minister Martin Foley confirmed the mandate would be in place indefinitely.

Under the mandate, authorised workers who refuse to get vaccinated can be fined $21,720, while businesses can be slugged almost $110,000. Any individual caught giving false or misleading information about their vaccination status can be fined almost $10,860 and businesses $54,300.

Those who refuse to get vaccinated will be prevented from obtaining a worker permit and while Victoria’s uptake has been rapid, most sectors are preparing for a small number of hesitant employees to be absent from work on Monday. Employers are also navigating unfamiliar territory around leave arrangements and the potential termination of contracts.

That includes the education sector, where government surveys suggest 98.4 per cent of teachers have had one dose. Nonetheless, Mr Dalgleish said some school leaders had endured difficult conversations with teachers who prefer to leave their job rather than get the jab.

“My understanding is the department will provide information to schools on which, if any staff, fail to meet the requirements by Monday. They can then seek a replacement staff member, he said

“What we are waiting on is clarity on what our responsibilities and rights are if staff members do turn up on-site when they are not meant to be there.”

When term one begins on January 28 next year, unvaccinated teachers will no longer be able to access leave entitlements, according to Education Department correspondence circulated to all school staff.

They will be considered “absent without leave” after that date before the department can legally terminate their employment from April 28.

The mandate has also started to bite in the sporting industry: three staff working for leading horse trainer Peter Moody will depart along with at least 32 other racing workers, while the AFL believes a “handful” of staff at Victorian clubs are yet to get the jab.

Bendigo teacher Simone, who asked for her surname to be withheld, and her partner, an agricultural worker, will both be out of work from Monday because they do not wish to get vaccinated. She has already used up all her annual leave and has no long service leave as she started in 2016.

As a result, Simone said their one-year-old son – who has had his childhood shots – would no longer be able to attend day care because unvaccinated parents were banned from drop-off while the couple may also need to move back in with Simone’s parents.

“What example would it set for our son if we succumbed to a health decision we weren’t sure about?” she said.

Jasmine Geen, a year 5 teacher at a primary school in Melbourne’s north – a COVID-19 hotspot – has been teaching on-site one day a week and said it was comforting to know she would only be working with colleagues who are vaccinated.

“No single child in my school is going to be vaccinated and there are over 500 students,” she said.

Healthcare workers have an extra week, until October 29, to get their first vaccine dose. As of Thursday, at least 94.2 per cent of staff at Royal Melbourne Hospital and 97 per cent at Austin Health had received one jab.

Lisa Fitzpatrick, Victorian secretary of the Australian Nursing and Midwifery Federation, said she did not have data available, but her sense was only a very small number of nurses were adamantly opposed to the vaccine

“For some people, nothing will change their opinion and that is a shame as we enter the peak of cases,” Ms Fitzpatrick said. “But there are consequences for all choices we make.” 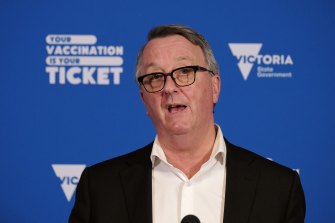 As Premier Daniel Andrews reiterated his view that getting vaccinated was “not a tough conversation” with your employer, the number of individuals asking community legal centre Justice Connect for clarification around their rights has noticeably increased over the last week.

Amy Schwebel, head of the centre’s access program, said the most common inquiries were around what evidence was required.

“How their privacy will be protected is also a common theme, and what steps their employers will need to make to support their return to work anywhere along the line,” Ms Schwebel said.

Victorian Trades Hall Council secretary Luke Hilakari, who represents more than 30 unions, said unions would continue working for members even if they chose not to get vaccinated.

“Employers will face options – standing people down without pay, there might be options to take paid leave for a period of time or doing some duties from home,” he said.

“Unions will continue to represent members as best we can, while respecting the health orders and encouraging the community to get vaccinated.”

With an easing of restrictions on the horizon once 70 per cent of eligible Victorians over 16 are fully vaccinated and as single-dose coverage nears 90 per cent, the state’s Chamber of Commerce and Industry chief executive Paul Guerra said federal data suggested vaccine hesitancy was lower in Victoria than any other state.