NSW has recorded 580 new locally acquired cases, and health authorities are investigating a new strain of the Delta variant that has been found in western Sydney.

Case numbers and hospitalisations are expected to increase as restrictions are eased in NSW for the fully vaccinated from Monday. 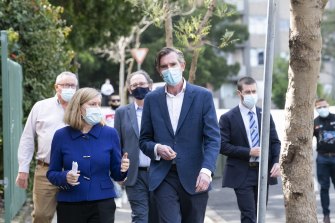 “We know that as we open up, case numbers will increase,” Premier Dominic Perrottet said on Saturday.

“But I know there’s a sense of excitement … I just ask people over the course of the weekend, follow the rules that are in place.”

Mr Perrottet also encouraged people to treat hospitality workers with respect as they return to venues.

“There’ll be many young people who are 18, 19, who will be in retail roles on Monday, it will be a challenge for them. Please when you attend a cafe, a restaurant, a pub, please treat them with respect,” he said.

The state’s Chief Health Officer Kerry Chant said there is no evidence to suggest the new Delta strain was more transmissible or dangerous than the more prominent Delta strain currently circulating in NSW.

“This is a new Delta strain identified through genome sequencing. As routine, we progressively do special testing … and we’ve detected a genome of the Delta strain which is different from that that was previously transmitting in our community,” Dr Chant said on Saturday morning.

“We’ve linked that back to a person who returned from overseas but the exact mechanism of how that strain emerged and got into the community in western Sydney is still under investigation so we will update you as those investigations continue.

“But I want to reassure you that there’s nothing about this Delta strain … that suggested it’s any more transmissible, going to cause illness or any other issues additional to the current Delta strain. So in essence, it is another Delta strain circulating in the community.”

There are currently 163 people in intensive care units and 812 admitted to hospital, Dr Chant said.

About 90 per cent of the state has now received at least one dose of a COVID-19 vaccine, with restrictions set to ease for people who have received both doses from Monday.

The state conducted 73,443 tests and administered 41,177 vaccines in the latest reporting period.

COVID-19 case numbers continue to follow – perhaps slightly exceed – the Burnet Institute’s projections for reopening, with the growing effect of vaccination counteracted so far by increases in movement among the population.

However, data suggests Victoria is unlikely to have as many hospitalisations and deaths as there were in NSW because the state is further advanced in its vaccine rollout than NSW was when it had similar case numbers.

Modelling commissioned by the Victorian government and released alongside the state’s road map to reopening forecast new cases would reach about 2000 a day on October 10 before plateauing, then jumping again when lockdown lifted at the end of October.

Stay across the most crucial developments related to the pandemic with the Coronavirus Update. Sign up to receive the weekly newsletter.