Bangkok: French President Emmanuel Macron has reignited his feud with Scott Morrison, accusing the former prime minister of entering a “nuclear confrontation” with China by seeking to acquire nuclear-powered submarines under the AUKUS pact.

Macron famously accused Morrison of lying to him by not informing him until the last minute that he was planning to cancel a $90 billion contract with French company Naval Group to build a fleet of conventional submarines for Australia. 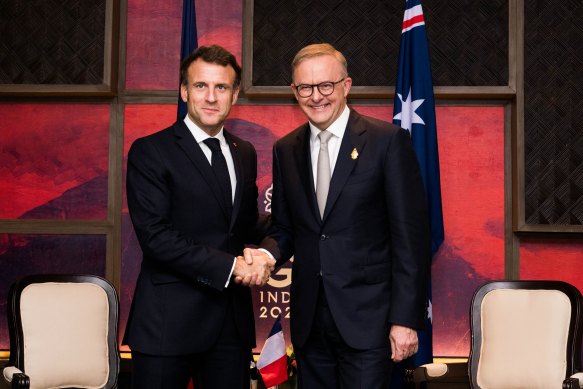 Anthony Albanese meets with French president Emmanuel Macron on the sidelines of the G20 summit.Credit:James Brickwood

Although Macron has developed a strong working relationship with Prime Minister Anthony Albanese, the scrapping of the submarines deal still rankles him over a year later.

Macron said the prospect of France supplying Australia with some submarines was still “on the table”, even as the government pushes ahead with AUKUS.

A day after holding a bilateral meeting with Albanese on the sidelines of the G20 summit in Bali, Macron told reporters in Bangkok that France had been helping Australia develop a sovereign submarine-building capacity.

“So it was both industrial cooperation and giving sovereignty to Australia because they will maintain the submarines themselves, and it is not confrontational to China because they are not nuclear-powered submarines,” he said.

“But the choice made by [former] prime minister Morrison was the opposite, re-entering into nuclear confrontation, making himself completely dependent by deciding to equip themselves [with a] submarine fleet that the Australians are incapable of producing and maintaining in-house.”

Although his comments were aimed at Morrison, Macron’s critique of Australia’s new submarine policy as a form of “nuclear confrontation” with China would also apply to the Albanese government, given it is sticking with the previous AUKUS plan.

Albanese declined to answer questions on the issue at a press conference on Thursday, saying he would only take questions on released Australian Sean Turnell.

The government has said it will announce which form of nuclear-powered submarine it will purchase by March, and is expected to opt for an American, rather than a British, model.

The government has said it will comply with Australia’s nuclear proliferation obligations and the submarines will not be armed with nuclear weapons.

In September, China sent a position paper to the UN’s nuclear watchdog, the International Atomic Energy Agency, arguing that “the AUKUS partnership involves the illegal transfer of nuclear weapon materials, making it essentially an act of nuclear proliferation”.

The government could potentially purchase a small number of French submarines as a stop-gap measure as it awaits the delivery of nuclear-powered submarines, which is not expected until around 2040.

Albanese said Chinese President Xi Jinping had not raised AUKUS with him in their bilateral meeting on Tuesday, even though the Chinese government has been highly critical of the pact.