Glasgow: Barack Obama has condemned Donald Trump and the Republican Party for active hostility to climate science and called out Russia and China for sitting on the sidelines in the United Nations Climate summit during a speech to delegates in Glasgow.

The former president, who was welcomed with cheers and farewelled with a standing ovation, confessed he sometimes feared the world would fail on climate and that “images of dystopia start creeping into my dreams”. 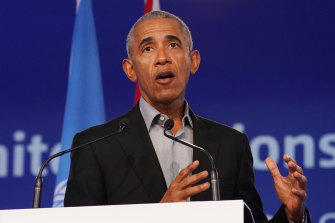 Former US president Barack Obama received a standing ovation after his speech at the Glasgow summit.Credit:Getty Images

But he said cynicism was the refuge of cowards, and that the world must continue to act.

Obama used the speech to reassure the conference that the United States was again engaged on climate, despite difficulties President Joe Biden faced in having climate bills passed and four years of inaction under Donald Trump.

“Of course, back in the United States, some of our progress stalled when my successor decided to unilaterally pull out of the Paris Agreement in his first year in office. I wasn’t real happy about that,” he said.

He added that, despite hostility from the White House, actions by states and cities along with the climate sector saw progress continue even before Trump lost office.

Tension between the US and China has been apparent at COP, with the US calling on China to commit to accelerating climate action and China responding that the US should act on its commitments.

Obama said it was discouraging that Chinese President Xi Jinping and Russian President Vladimir Putin had chosen not to attend and that “their national plans reflect what appears to be a dangerous absence of urgency, a willingness to maintain the status quo”.

Directly addressing the world’s youth, he said they were right to be frustrated at older generations’ ongoing failure to address the issue, but called on them to keep active and to vote as though their lives depended on it.

Political processes were slow moving, but small victories added up and gained their own impetus, he said.

Asked about her view of progress of the conference, Laurence Tubiana, chief executive of the European Climate Foundation and a key architect of the Paris Agreement, said she was concerned about “countries like Australia that have said nice things [reaching net zero emissions by 2050], but are not saying what they are doing over the next 10 years”.

She said in her view “greenwashing is the new climate denial”.

A division between rich and developing nations over mechanisms for wealthy nations for loss and damage caused by climate change deepened in talks on Monday.

The United Nations also was forced to defend the presence of fossil fuel lobbyists at the talks after an analysis by the non-government group Global Witness analysed a guest list and found that more than 500 were registered to attend, more than the world’s largest national delegation.

UNFCCC Executive Secretary Patricia Espinosa said it was up to individual countries to bring who they liked, and the COP conference took an inclusive approach, Bloomberg reported.

“Some of the constituents may accredit some people that may be linked to some of these fossil fuels. The same in the case of some party delegations. It is really the sovereign right of every government to accredit as part of its delegation the persons that it deems appropriate,” she said.

Get weekday updates on the climate summit that will shape our future. Sign up to our COP26 newsletter here.

Most Viewed in Environment