New parents will be able to choose how they split 20 weeks of paid parental leave, but overall won’t have more time to spend with their babies under changes the government plans to introduce within a year.

After a year of discussion about the treatment of women and their safety, the budget unveiled on Tuesday contains $2.1 billion of new measures supporting women specifically. 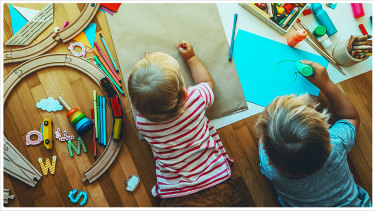 Paid parental leave will be shared across two partners under budget changes due from next year.Credit:

The bulk of this – $1.3 billion – is money for programs that form the first part of the Commonwealth’s contribution to the new national plan to end violence against women and children.

The government says its paid parental leave changes, costing $346.1 million over five years, will give families more choices in who cares for new babies.

At the moment, the primary carer of a new baby – overwhelmingly mothers – can get 18 weeks’ leave paid at the minimum wage and their partner can take two weeks.

Under the budget plan, the two schemes will be combined and parents will be able to decide how they split the 20 weeks.

The government would also add an option of a household income means test of $350,000 to access the taxpayer-funded leave, with an extra 2200 families able to use the leave each year. Currently, the scheme can be used by families where the mother earns less than $150,000.

However, the budget papers reveal the changes won’t come until after the election – the intention is to introduce them by March 1, 2023, after consultation.

The benefits of an improved paid parental leave scheme have been increasingly touted by economists, business, and early childhood and parental advocates.

Most of those who have put forward proposals advocate a scheme where each parent can access six weeks’ leave plus a further 12 weeks to be split as they wish, offering a total of 24 weeks. They say a use-it-or-lose-it program would encourage more new fathers to take leave, leading to better economic security for women.

In 2020-21, less than 90,000 fathers used the two weeks of Dad and Partner Pay, accounting for less than a third of the births that year. Meanwhile, 99.5 per cent of those using the government’s paid parental leave and 88 per cent of those accessing employer-funded schemes were women.

A draft of the new national plan to end violence against women and children was released in January and the final version needs to be agreed by all states and territories before the middle of the year.

The new budget funding is split across programs for prevention, early intervention, response and recovery.

It includes $240 million to continue a program started last year that offers cash payments and financial assistance of up to $5000 to women escaping violence. This is expected to help 37,500 people over the next three years.

The Safe Places program will be nearly doubled, with an extra 720 new crisis and transitional accommodation projects, while a scheme that offers women security assessments and upgrades in their homes will be significantly expanded with an extra $54.6 million over five years.

There’s a new focus on recovery and offering support beyond an immediate crisis, including $100 million for trauma-informed national counselling services, expected to support about 80,000 people, and Family Court programs.

“Women and children who have experienced violence must be able to access supports, beyond the crisis response, to achieve long-term improvements in health and wellbeing,” Women’s Safety Minister Anne Ruston said.

Last year, the women’s budget measures were worth $3.4 billion in total. Half of this went to the tweaks to childcare subsidies that offered some fee relief to parents with two or more children aged under five in care.

There are no further changes to childcare subsidies in this budget, although there is $19.4 million over five years to establish new services in regional and remote areas.

Labor has promised to increase childcare subsidies across the board and offer them to more families, if it wins the election. It is yet to announce its policy on paid parental leave.

The government has allocated $330.6 million for female-specific health measures. This includes measures to address endometriosis and pelvic pain announced last week, and $23 million for stillbirth and miscarriage support services and autopsies.

Another $106.9 million will be spent on promoting women in leadership, boosting the number of female trades apprentices, improving gender equity reporting and creating more opportunities for women in sports leadership roles.

Jacqueline Maley cuts through the noise of the federal election campaign with news, views and expert analysis. Sign up to our Australia Votes 2022 newsletter here.