The dire warnings from some about Victoria’s proposed new pandemic laws are mostly wrong or overblown. There are important areas where the bill needs fixing but overall, it’s a big improvement on the current laws.

Beyond the usual politics, I suspect what’s happening with the reaction to this bill is partly about our community’s current state of mind. People are exhausted. The hyperbole from some about this bill makes many people worry we’ll be plunged into endless lockdowns and restrictions when in fact, this bill has far more safeguards than the current law. 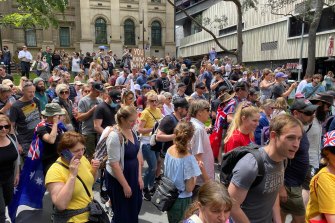 Stepping back from the immediate debate, it’s clear, as we emerge from the fog of lockdown, we’re at a critical moment. The past 20 months have given us hard-learned and sometimes bitter lessons. As difficult as it has been, these lessons are valuable. We must act on them.

First, we must recognise our relative success. Australians have been spared death and serious illness on the scale most countries have endured. This is largely due to actions of governments and their public health teams and the sacrifices of people and communities. 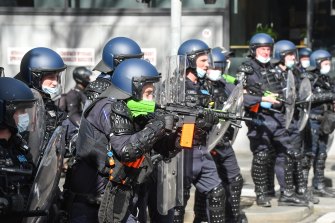 Police used a range of non-lethal crowd control measures to disperse crowds at a lockdown protest in August. Credit:Justin McManus

Did governments strike the right balance? In many respects they did. But there were mistakes, overreach and inflexibility that harmed people. Looking forward, we need systemic change that builds on our success and avoids future mistakes.

Before this pandemic, for many people living safe, comfortable lives in Australia, human rights were often taken for granted. Rights violations were things that happened to other people in other places.

The pandemic changed that. People who never had to worry much about police were suddenly being stopped and fined for driving to an exercise location. A pregnant woman was arrested and handcuffed in front of her family over a Facebook post.

Drones monitored compliance and police tried to shut down airspace over protests to stop media coverage. Parliaments were suspended and citizens overseas were abandoned. Trying to make sense of everything, people asked what rights they had in response to such extraordinary measures. 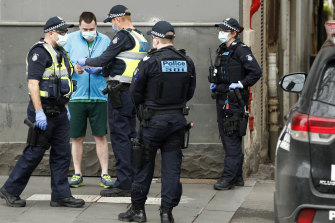 A man is issued a fine for breaching lockdown rules in Melbourne’s CBD.Credit:Darrian Traynor

Victoria, along with the ACT and Queensland, is the only jurisdiction which expressly protects our rights in a human rights charter. These charters require governments to comply with human rights. Rights can only be limited if there’s a good reason, like protecting lives and health, and the restrictions are the minimum reasonably needed to get the job done.

These charters are doing important work in this pandemic. They force public officials to consider rights and provide a compass to help governments make the right decisions. They help rein in excess and give people power to challenge decisions that impact them.

One of the most controversial measures which we, along with others questioned, was Victoria’s curfew. It was challenged in the Supreme Court using the charter. The government eased and then dropped the curfew altogether the day before the case.

The court, after hearing the evidence, decided that while the curfew was a major restriction on rights, it was reasonably necessary to protect public health and was a proportionate response to urgent circumstances. The case didn’t win, but it forced government to justify its actions before an independent court.

While Victoria’s charter has been important, it needs strengthening. Supreme Court action is out of reach of most people. A 2015 review recommended making the charter easier to use, including by giving people the power to take action in the low cost, accessible Victorian Civil and Administrative Tribunal. The Andrews government still hasn’t acted on this. The charter also doesn’t allow you to get compensation if the government breaches your rights. This must change.

Police accountability is vital but our police complaints system continues to fail us. In 2018, a parliamentary committee recommended that the Andrews government ensure that people’s complaints of serious police misconduct were independently investigated. Today, we still have police investigating themselves in the vast majority of cases.

At the national level, there’s no Australian human rights charter. We’re the only western democracy without one. When people tried to challenge overreach like the ban on leaving our country without permission, or the criminalisation of citizens returning from India, they had to rely on narrow, technical arguments and failed. An Australian charter would give people greater protection. It would help put fairness, equality, respect and dignity at the heart of government action. Unsurprisingly, our survey research shows the strong support for an Australian charter has grown significantly over the pandemic.

Turning back to Victoria’s pandemic bill, the last 20 months has shown the need for stronger safeguards around emergency powers. This bill provides that. It improves transparency, oversight, scrutiny and accountability. It has new privacy safeguards and a fairer way of dealing with fines for people on low incomes.

It’s not perfect and the Victorian Parliament should take this opportunity to get it right and build public trust. But it’s definitely not the power grab some have made it out to be. In fact, it’s the opposite.