IT’S Spain against Portugal in the holiday Euros after both said this week they were set to welcome Brits on summer getaways.

They will be rivals in this summer’s year-delayed Euro 2020 football tournament — and their resorts are battling it out to attract sun-seekers. 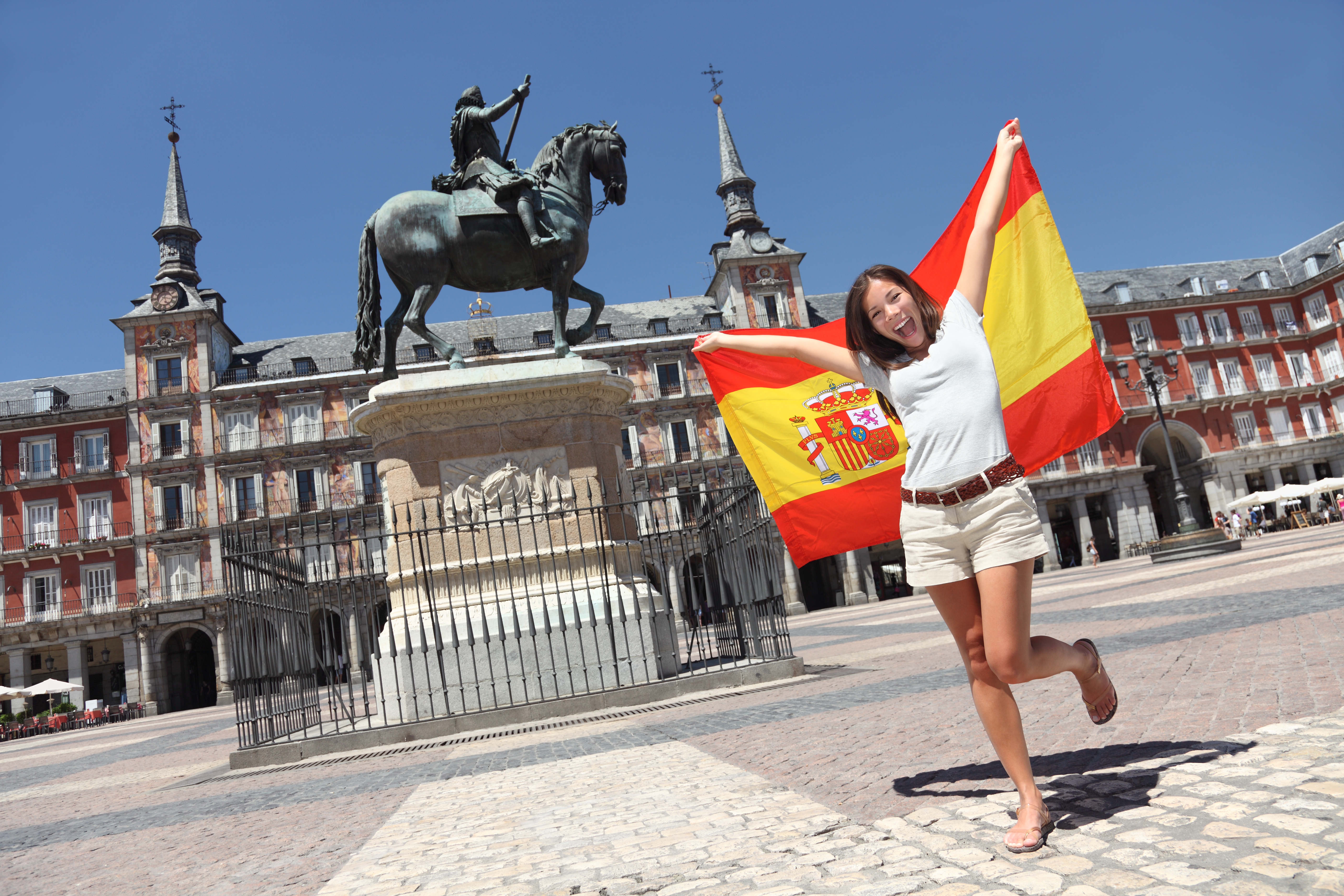 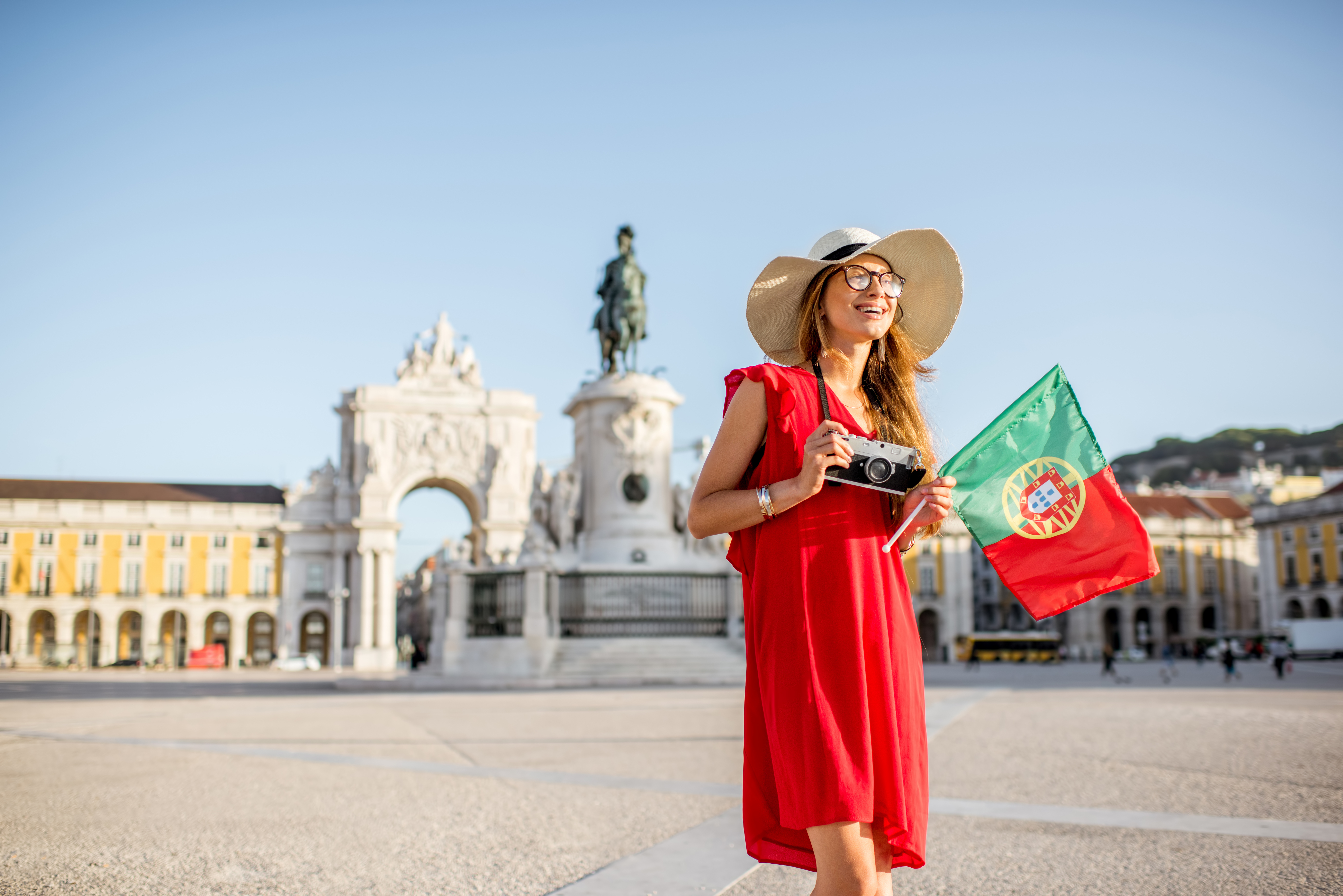 Today, as the powerhouse holiday spots line up to score visitors, we show how you can save if you pick, say, the Algarve over Majorca.

But be careful – it is still unclear whether Brits will be able to travel to either country without restrictions on return.

So make sure you are happy with all possibilities before you book.

The Government is expected to confirm next week that foreign travel can resume from May 17 — and which countries are on the green list, meaning less faff when returning home.

We asked Post Office Travel Money to give us a peek at its holiday costs barometer so you can get an idea of the prices for when holidays kick off again.

The Post Office’s Nick Boden says: “If you are hoping to holiday in Spain or Portugal but have not decided exactly where, make sure you include all the costs of travel abroad in your planning.

“This does not just mean comparing package prices or flight costs but also doing some holiday homework to check how resort prices have changed since your last trip.”

Post Office Travel Money found prices have plummeted in the Algarve, making the cost of meals, drinks and other tourist staples 16 per cent lower in the Portuguese favourite than a year ago. 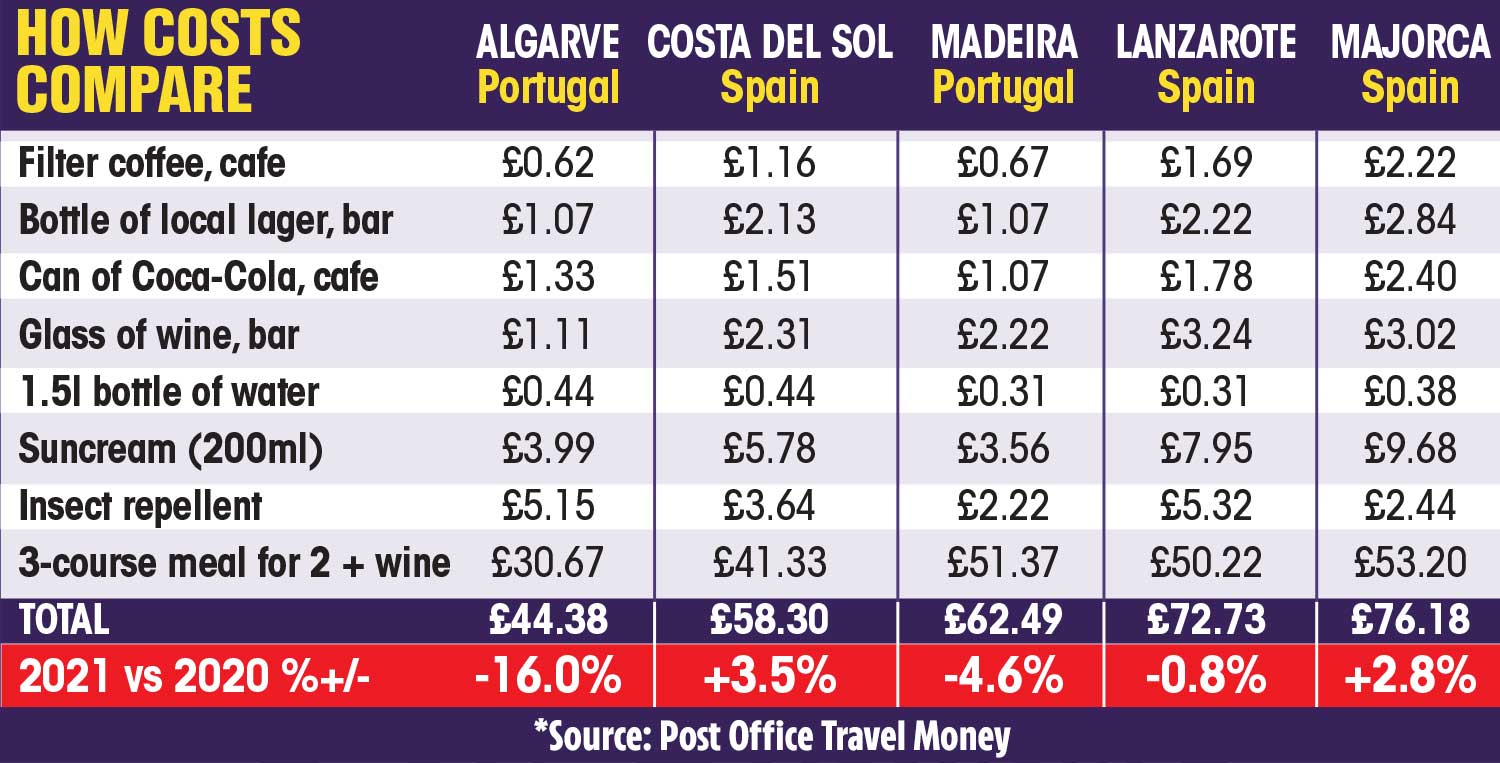 By contrast, prices are UP 3.5 per cent in Spain’s Costa del Sol.

At £58.30 for a sample basket of eight tourist staples, the destination is almost a third pricier than the Algarve at £44.38.

Even so, Spain and Portugal are the cheapest places to go in the Eurozone, according to the research.

Holidaymakers hoping to travel to the Spanish islands can expect to pay more than on the mainland.

In the Canary Islands, Lanzarote (£72.73) is around 25 per cent more expensive for the same items than the Costa del Sol.

Majorca, the most popular Balearic island for Brits, is pricier still (£76.18).
Bargain hunters might consider swapping a Spanish island for a Portuguese one.

Madeira is shaping up to be far cheaper than Lanzarote and Majorca.

The strength of the Pound is a key reason why prices are lower in Portugal and why rises in Spain are modest.

At the moment, sterling is 3.5 per cent stronger than a year ago.

Post Office Travel Money recommends keeping an eye on movements in exchange rates to judge when best to buy currency for those long-awaited trips abroad.

PRINTER ink makers hiked prices when families were home-schooling and working from home.

Some cartridges cost up to 75 per cent more when the schools were closed than they did before lockdown, a Sun probe found. 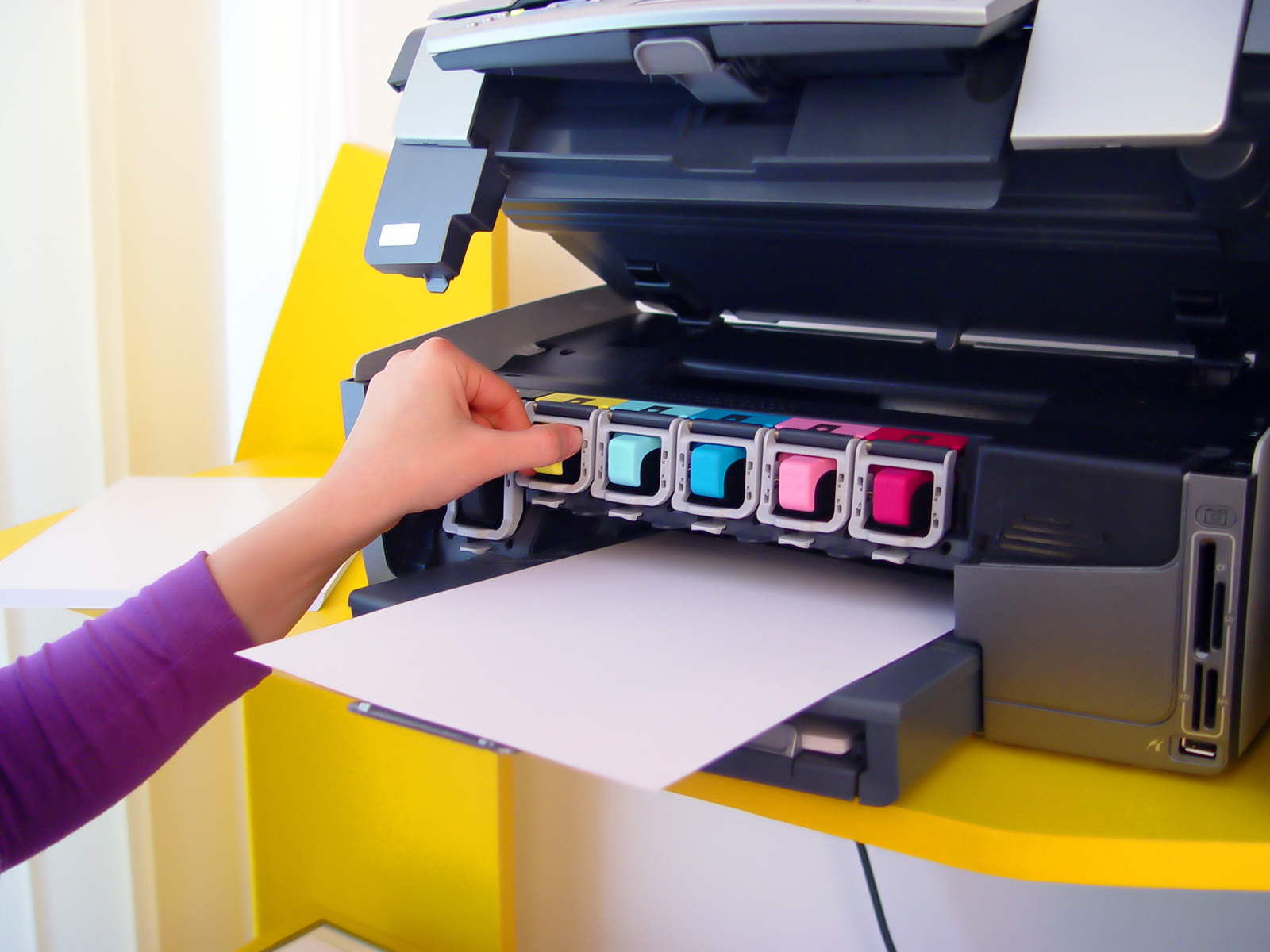 Cartridge sellers said “unprecedented demand” and problems obtaining materials due to lockdown and Brexit led to a national ink shortage that caused prices to rise.

This week, with schools back and more people returning to offices, prices started to fall, but remained around a third higher than pre-lockdown.

Customers have complained on social media about the “huge price increases” of standard ink cartridges since the pandemic began.

One Twitter user accused printer manufacturers of “profiteering on the back of working from home”.

Student Shannon Hulse said a double pack of black and coloured ink cartridges for her printer cost £22.99 before Covid, but during lockdown that rose to £40 – an increase of nearly 75 per cent.

“My uni campus is closed, so I have no option but to buy ink,” she tweeted.

Sales of home printers grew by 15 per cent in 2020, as people started working and studying from home, according to a report by Deloitte.

Website Cartridge Save said manufacturers including HP, Canon and Epson had all experienced stock shortages due to “a sudden increase in demand for home printers and ink cartridges”.

More people printing return postage labels for online shopping, as well as increased use of food and medicines which come in printed packaging, had also driven up demand for ink nationally, it explained. 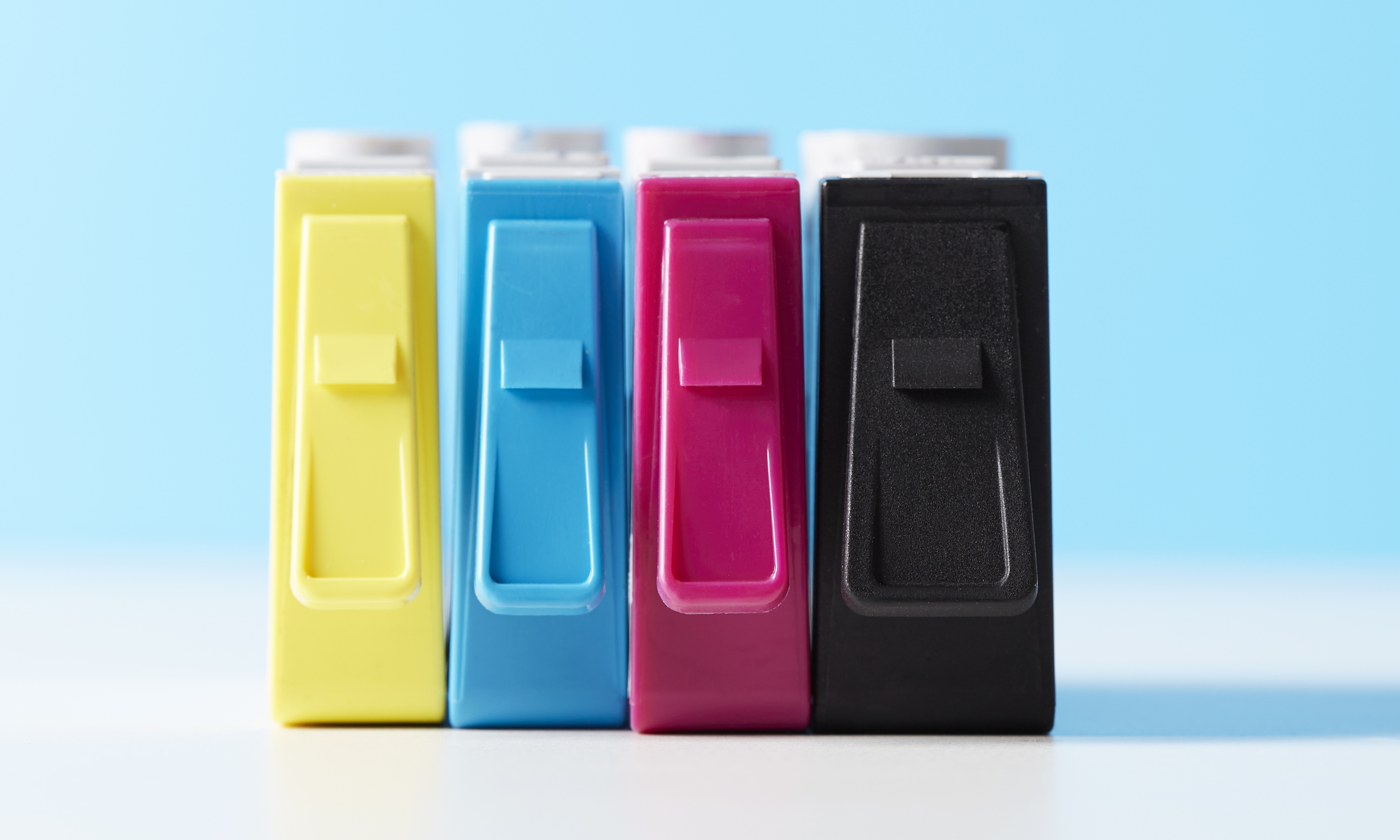 Last summer a Which? magazine report found printer ink was more expensive than premium Champagne and Scotch whisky, with one Epson cartridge working out at £2.04 per millilitre.

A spokesman for HP said: “Delivering the best customer experience is our priority. We offer the highest quality and a range of highly sustainable print supplies for customers.”