Carnival Queen! Camilla keeps her cool in a green floral dress as she and Prince Charles visit Notting Hill Carnival performers preparing for the first event in three years due to Covid cancellations

The Duchess of Cornwall looked elegant in a green patterned dress as she met with performers in this year’s Notting Hill Carnival this afternoon – although her outfit was somewhat upstaged.

Prince Charles and his wife met with performers in this year’s carnival as they gear up for the first event since 2019.

The carnival, which was cancelled in 2020 and 2021 due to Covid, is set to make a triumphant return to the streets of West London this year with more than a million people expected to attend.

Visiting performers in this year’s procession at performing arts venue The Tabernacle in Notting Hill, Charles and Camilla posed for photos and got deep into conversation.

The Duchess glowed in a green pattered dress from ME+EM costing £295, paired with espadrille wedges. 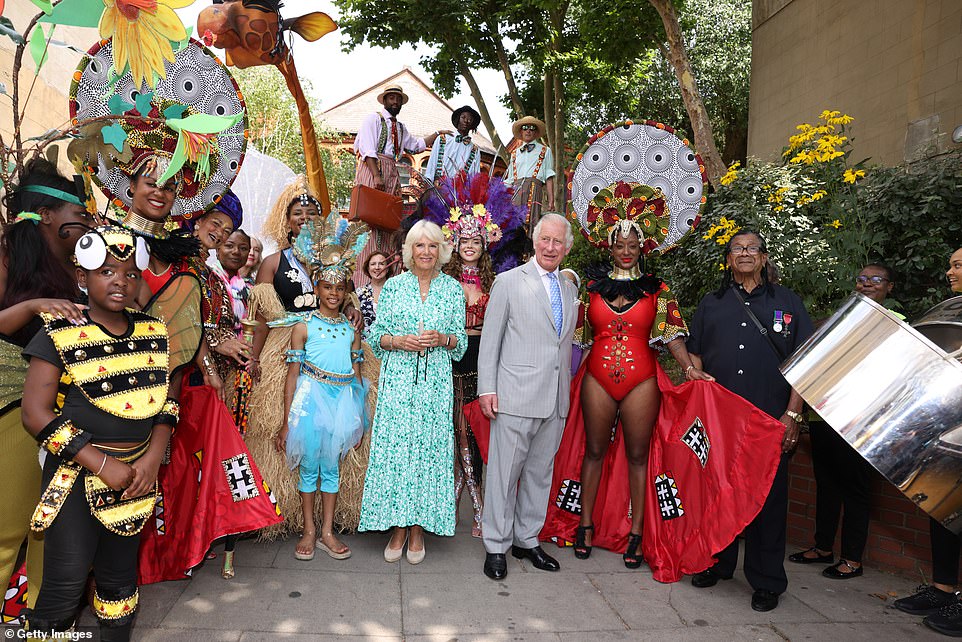 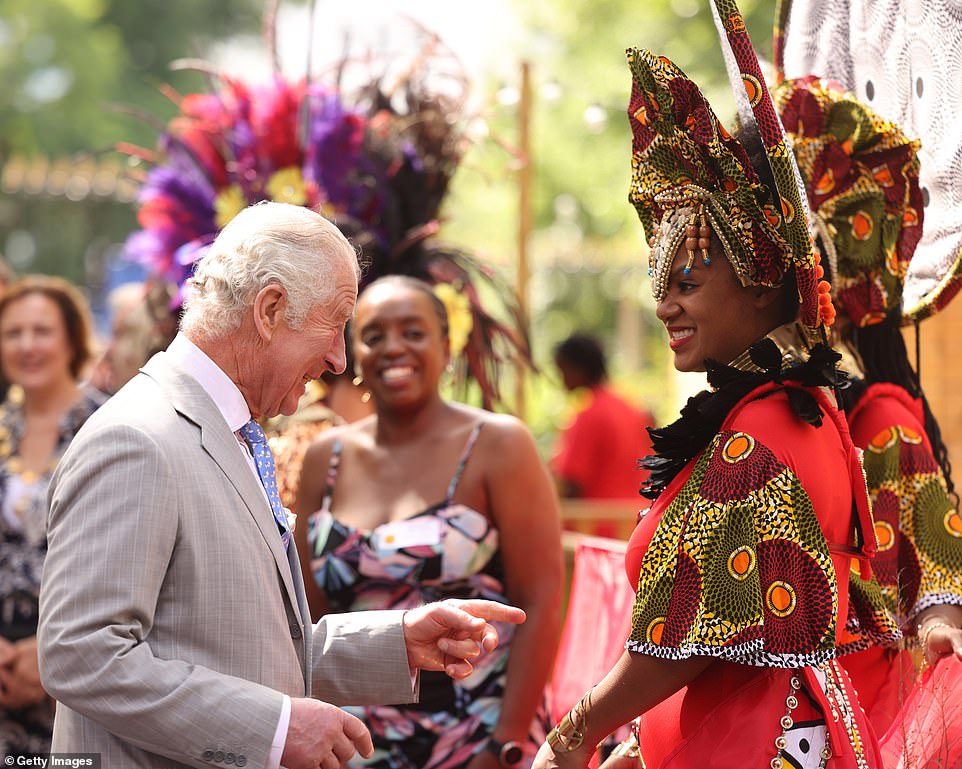 The Prince of Wales, 73, shared a joke with one of the carnival performers who was dressed in a stunning red dress and patterned headdress 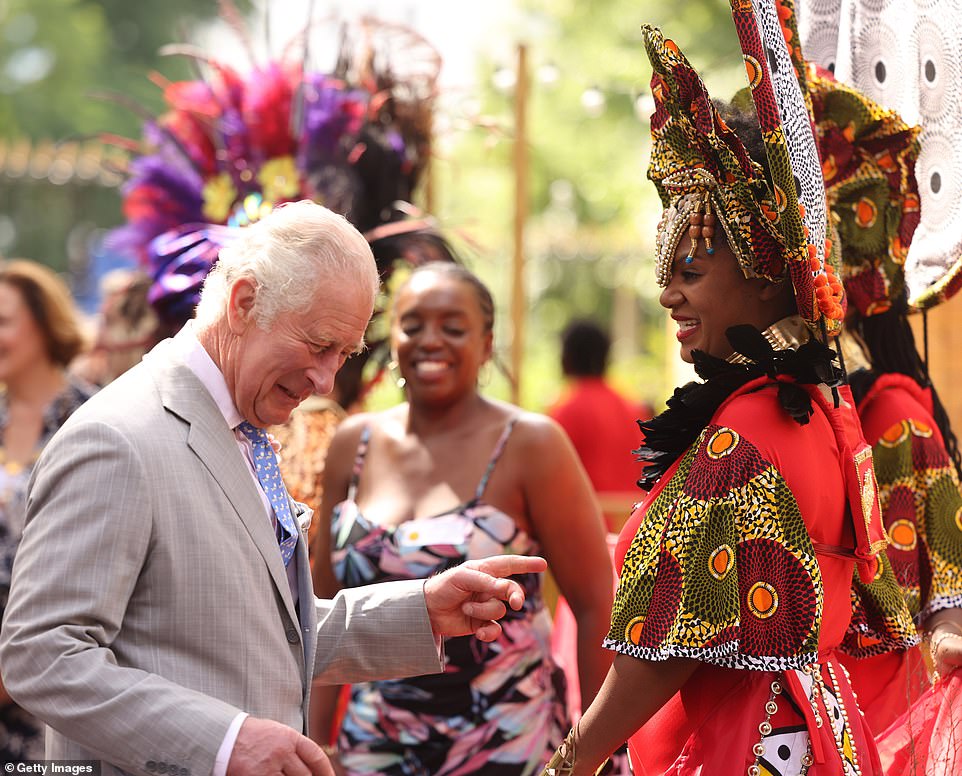 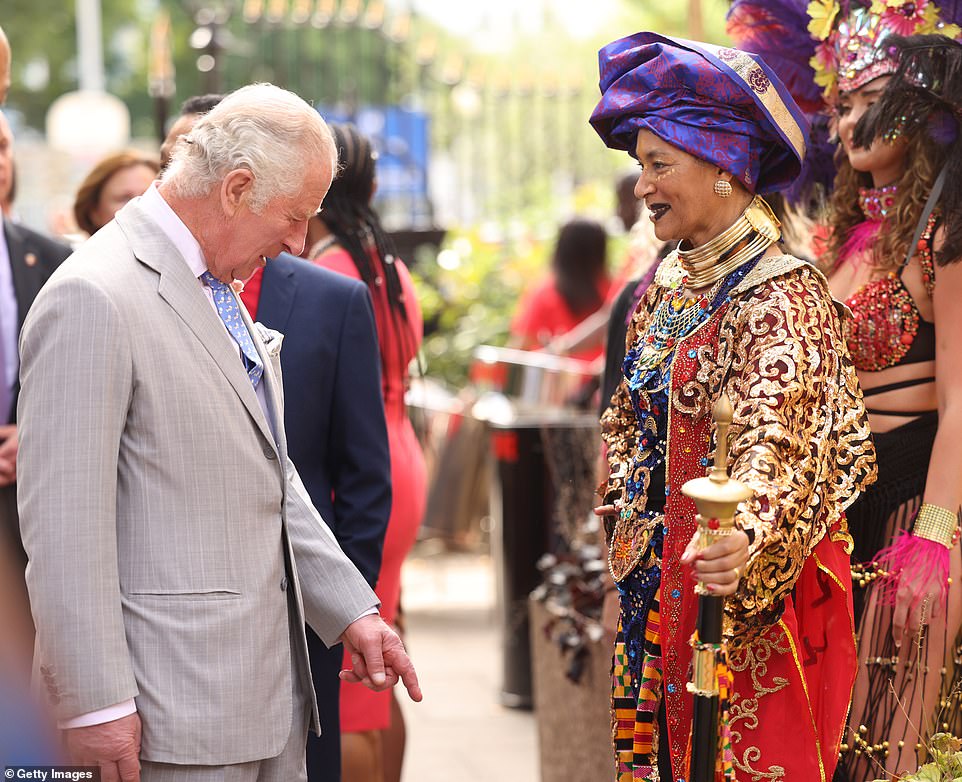 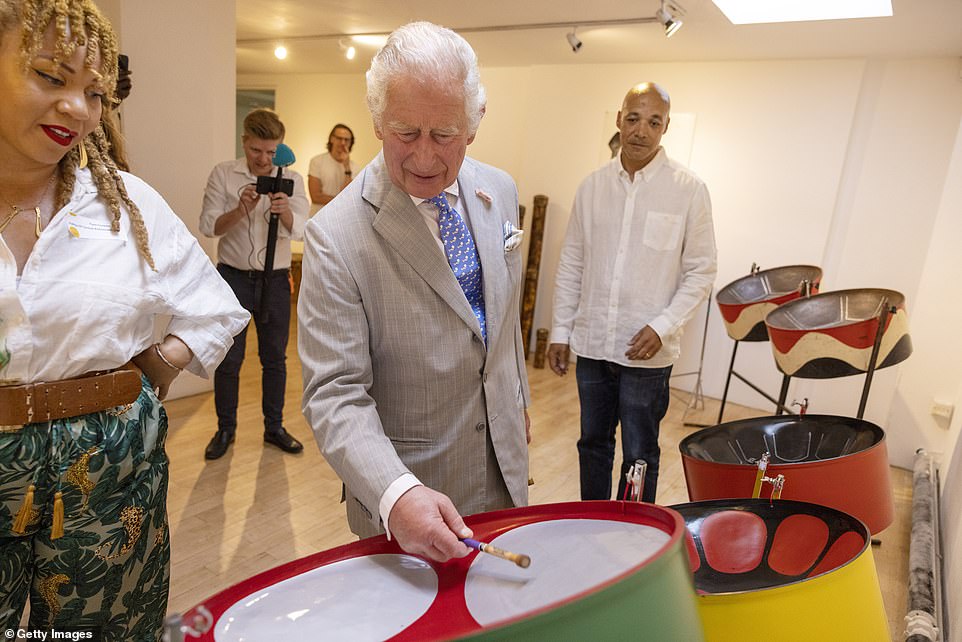 Footage shows the Royal couple joining a rehearsal procession complete with performers in dazzling costumes and and catchy tunes played on the steel pans.

Accompanying performers in the procession were huge sunflowers and an enormous giraffe figurine wearing a top hat.

Charles, 73, even tried his hand at playing the steel pan, a musical instrument originating from Trinidad and Tobago.

As he played a decent tune, a steel pan player watched over him.

He said: ‘I always say there’s a trick to playing the steel pan: If you smile, it sounds better.’ 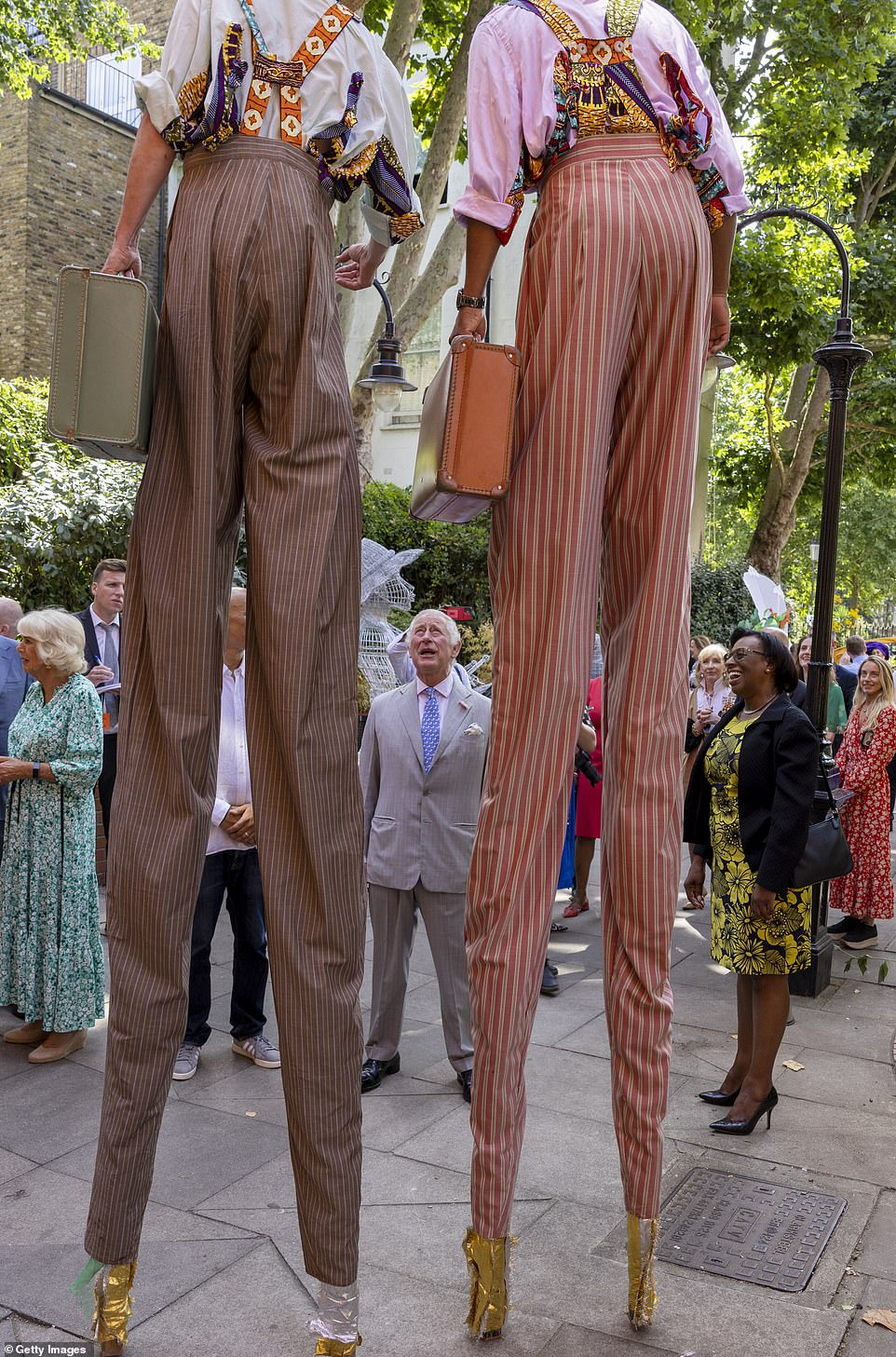 Prince Charles was in awe as he looked up at the talented stilt walkers, known as Moko Jumbies 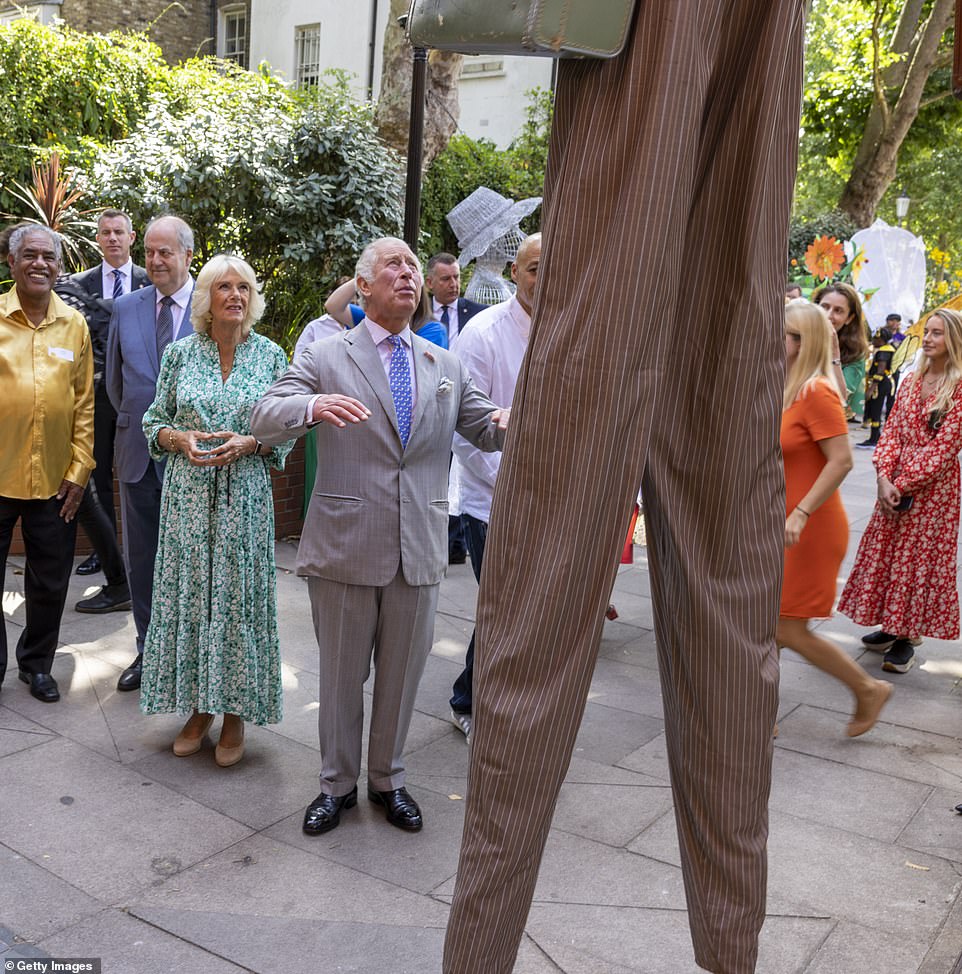 It’s a long way up! Charles tried to have a conversation with the stilt walkers who towered over him at 12ft 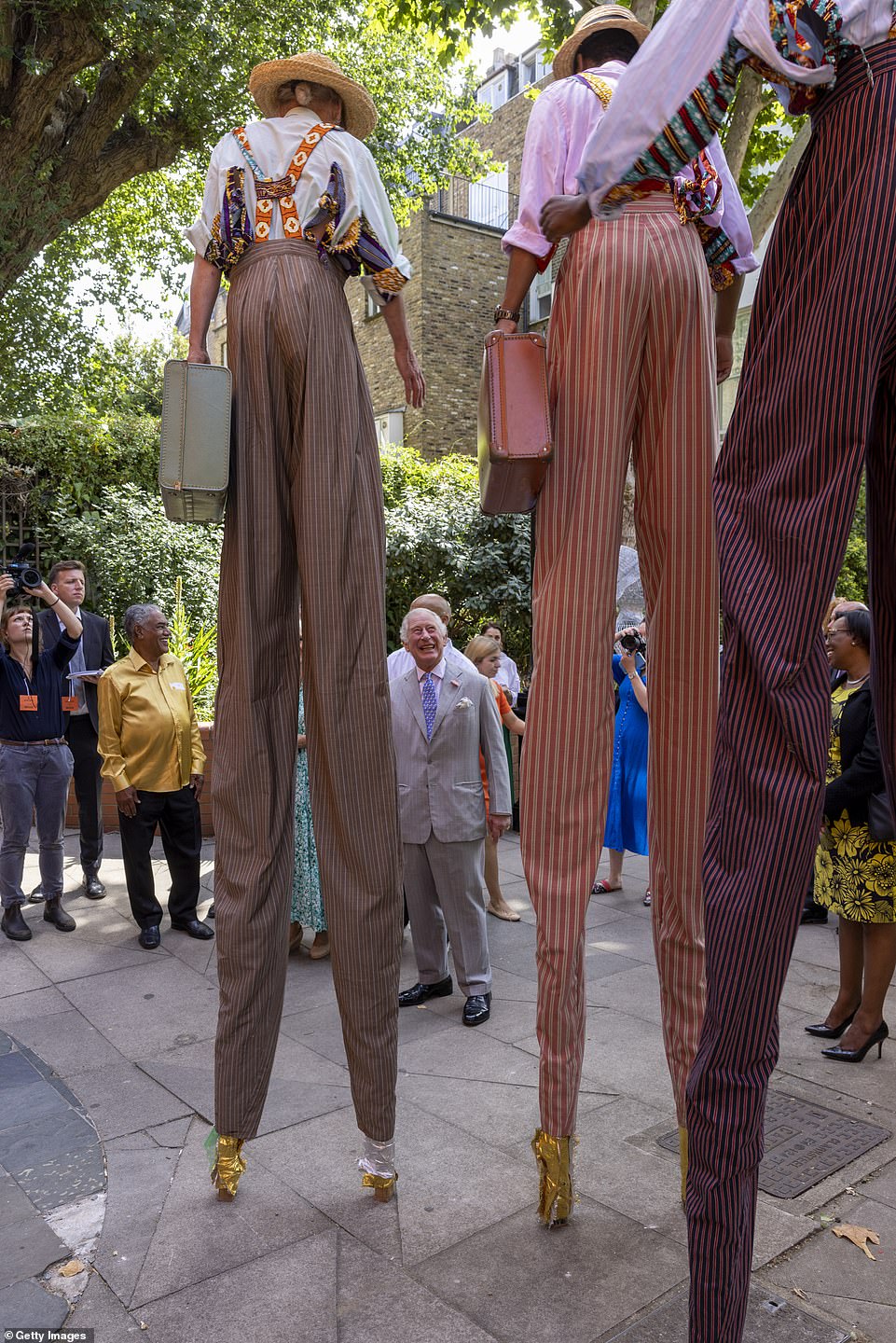 The Prince of Wales beamed as he saw the Moko Jumbies, which roughly translate to mean ‘healing spirit’ 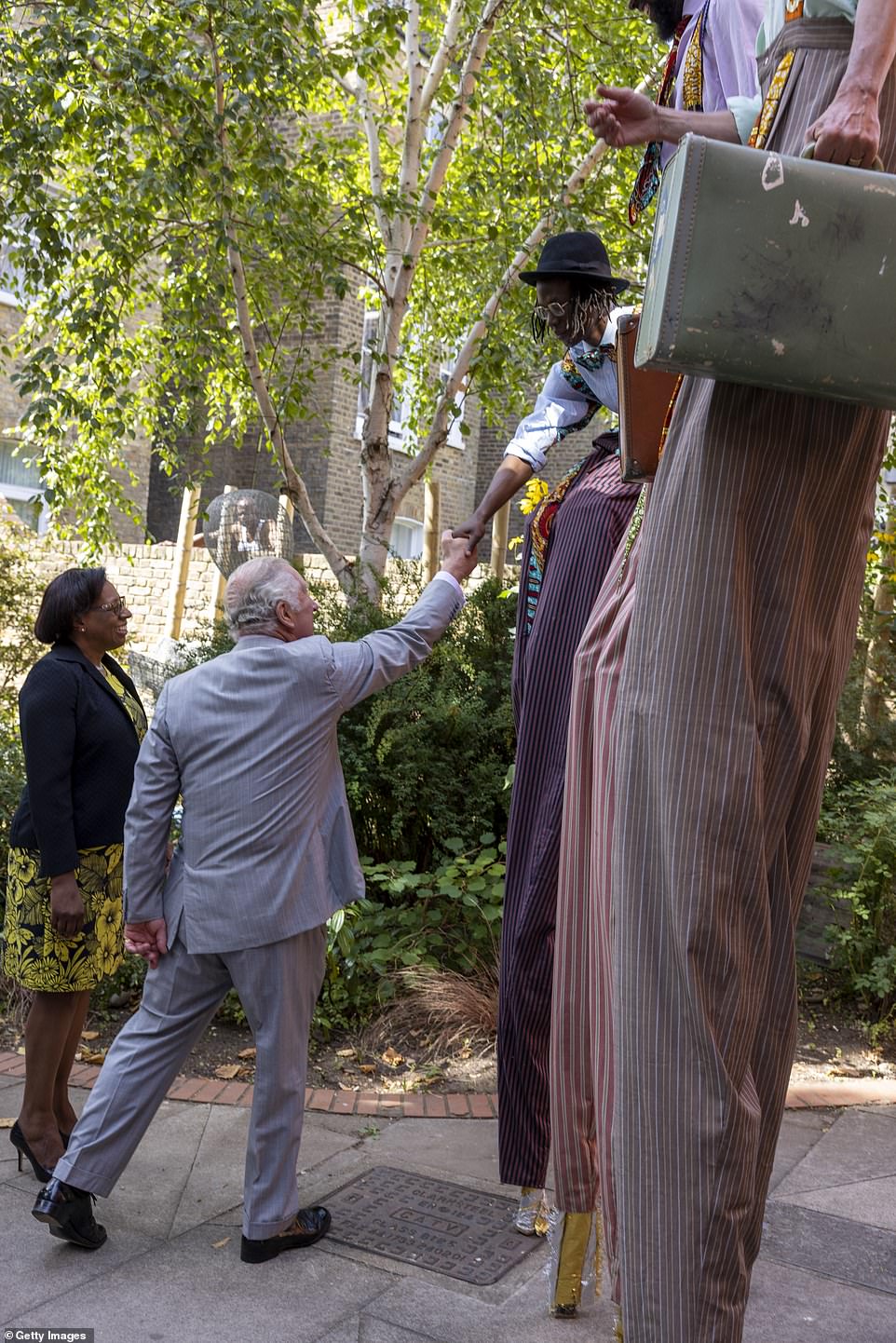 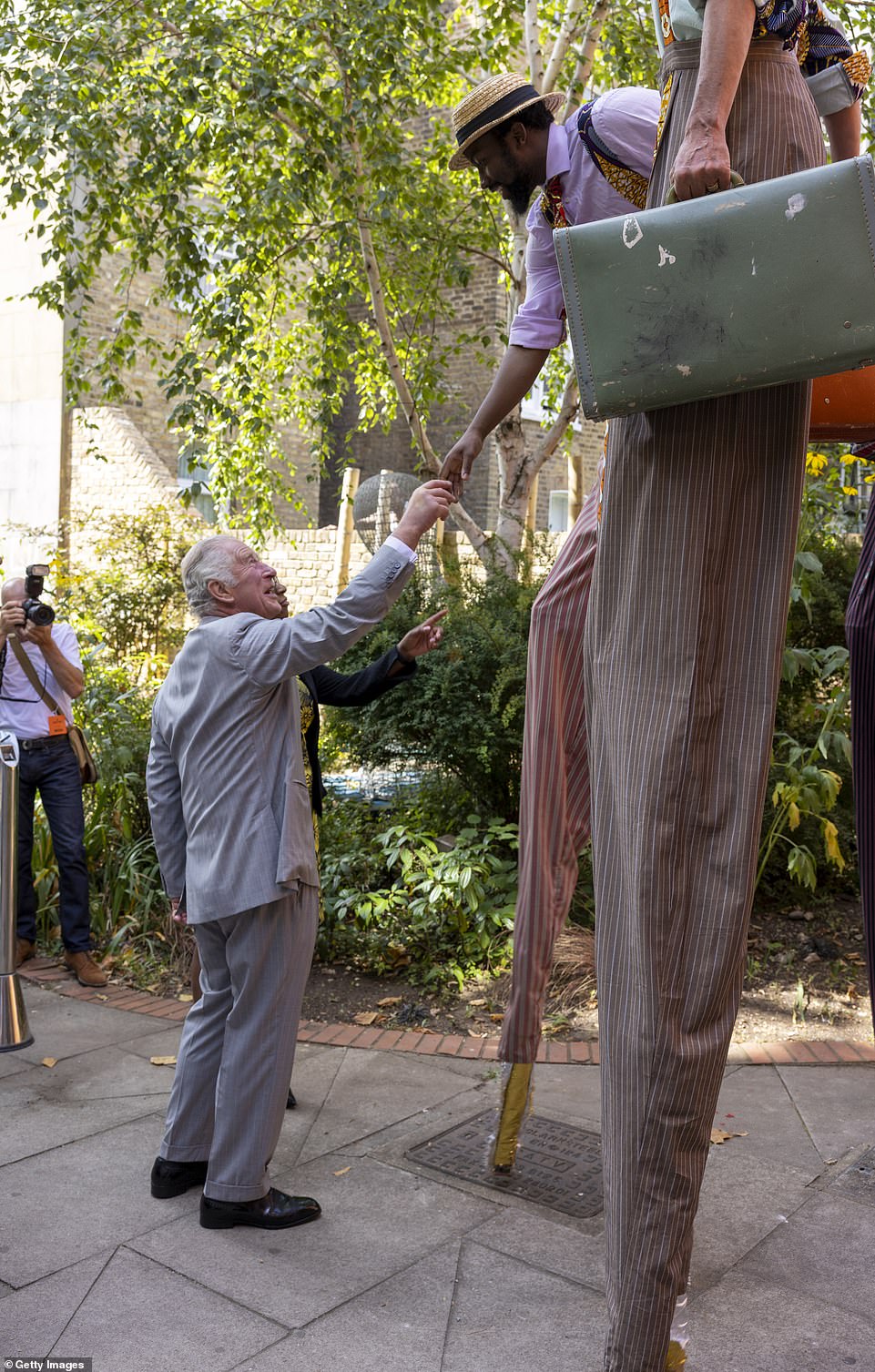 However Charles didn’t seem particularly sure of his musical abilities and replied: ‘I’m not much cop at this.’

The future King and his wife were also greeted by 12ft high Caribbean stilt walkers called Moko Jumbies – and appeared to be in awe of them.

‘Moko’ is the word for ‘healer’ in Central Africa, while ‘Jumbi’ is a Caribbean word for ‘ghost’ or ‘spirit’.

To mark the return of the Notting Hill Carnival, which first took place in 1966, Charles has contributed to a souvenir brochure for the event.

He wrote: ‘The carnival is…a tremendous expression of the cultural variety which means so much as we continue to strive towards the establishment of an harmonious multi-cultural society.’ 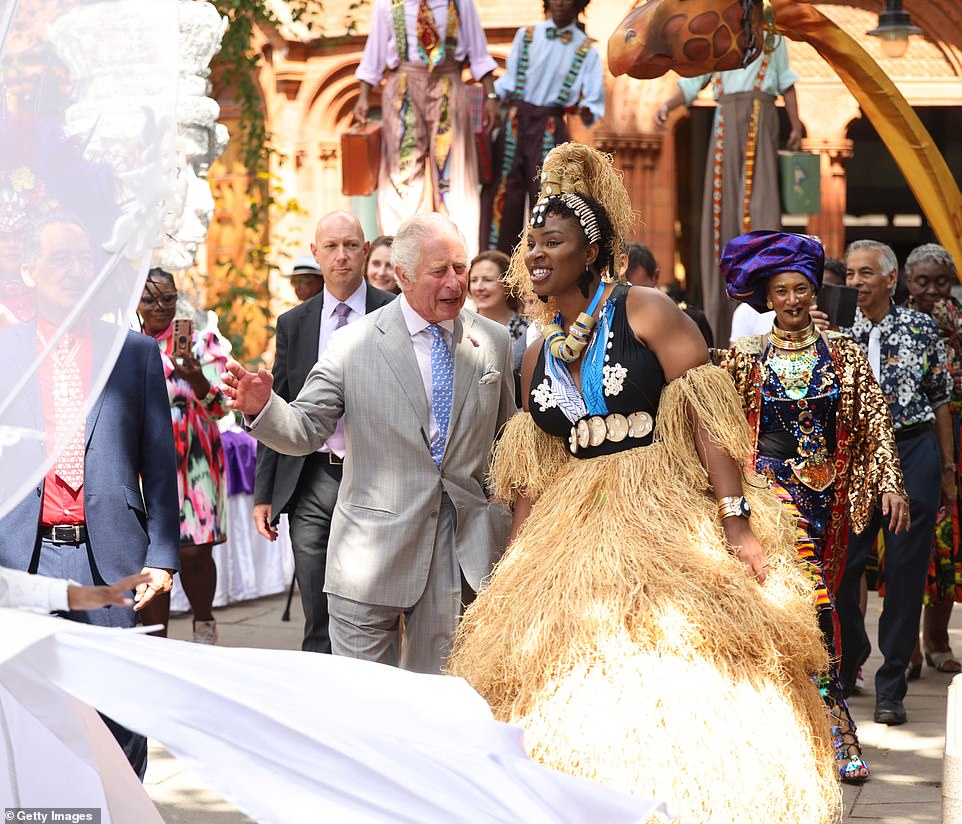 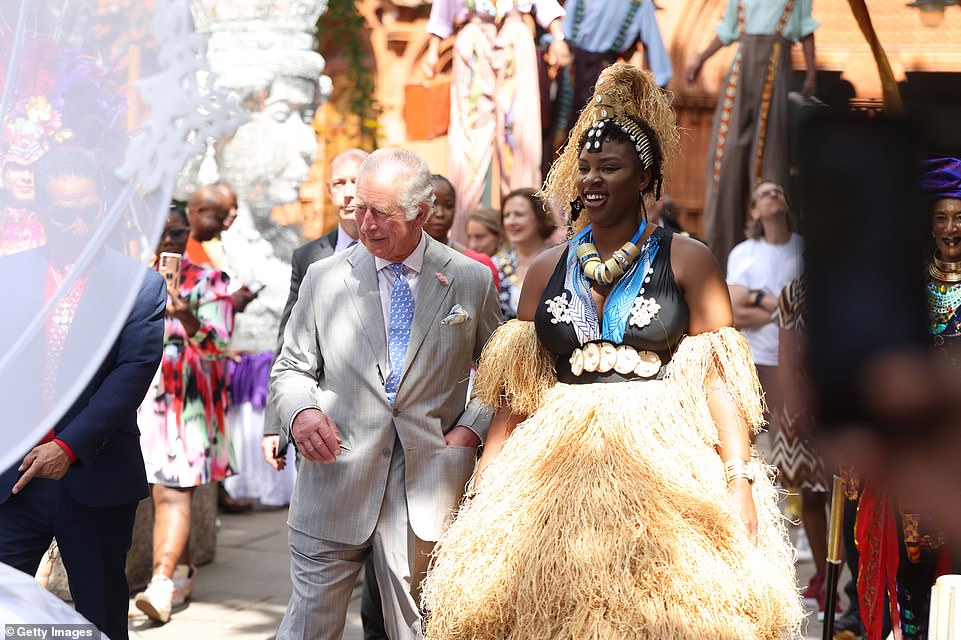 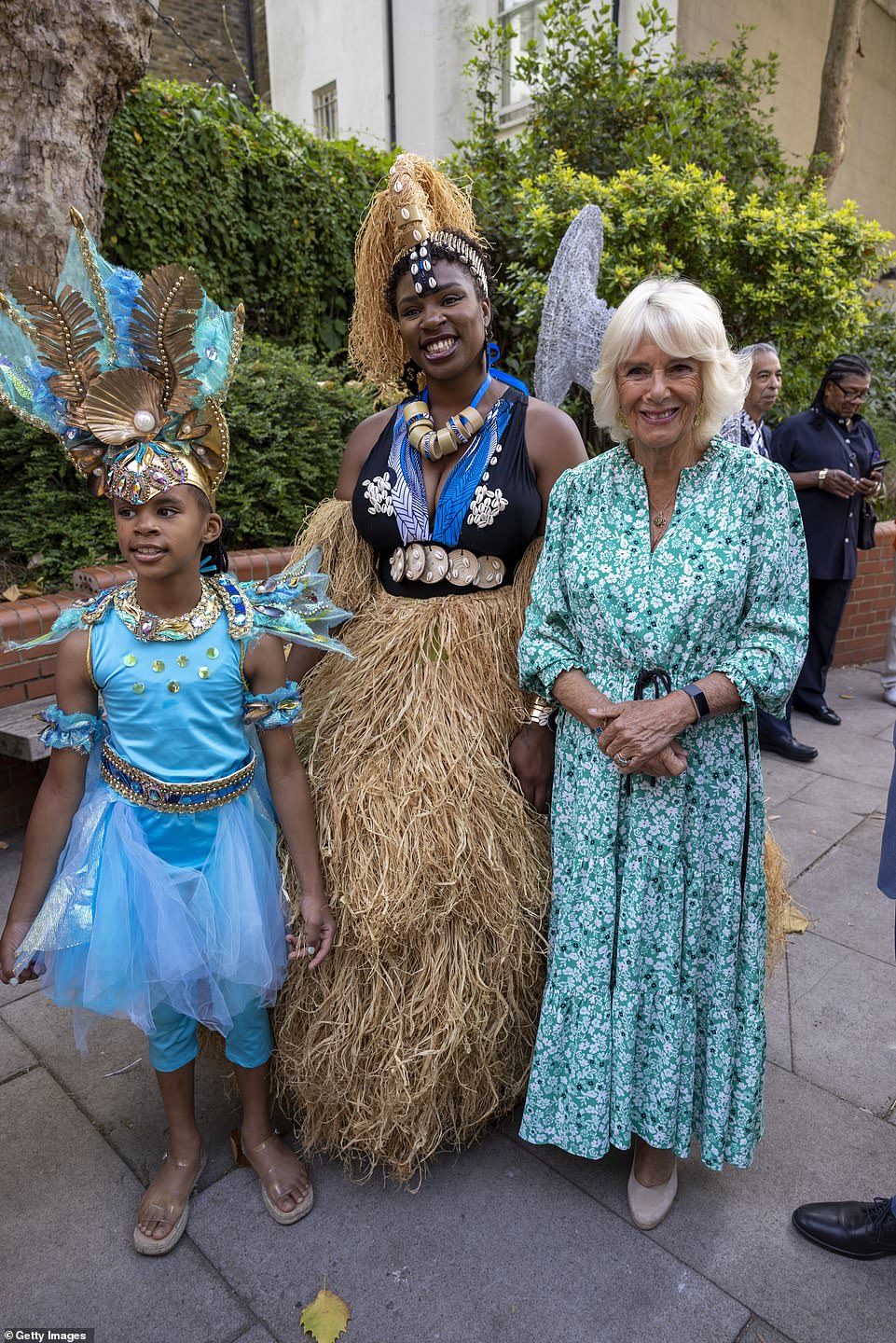 Camilla, wearing a green pattered dress from ME+EM, posed with adults and children involved in this year’s carnival procession 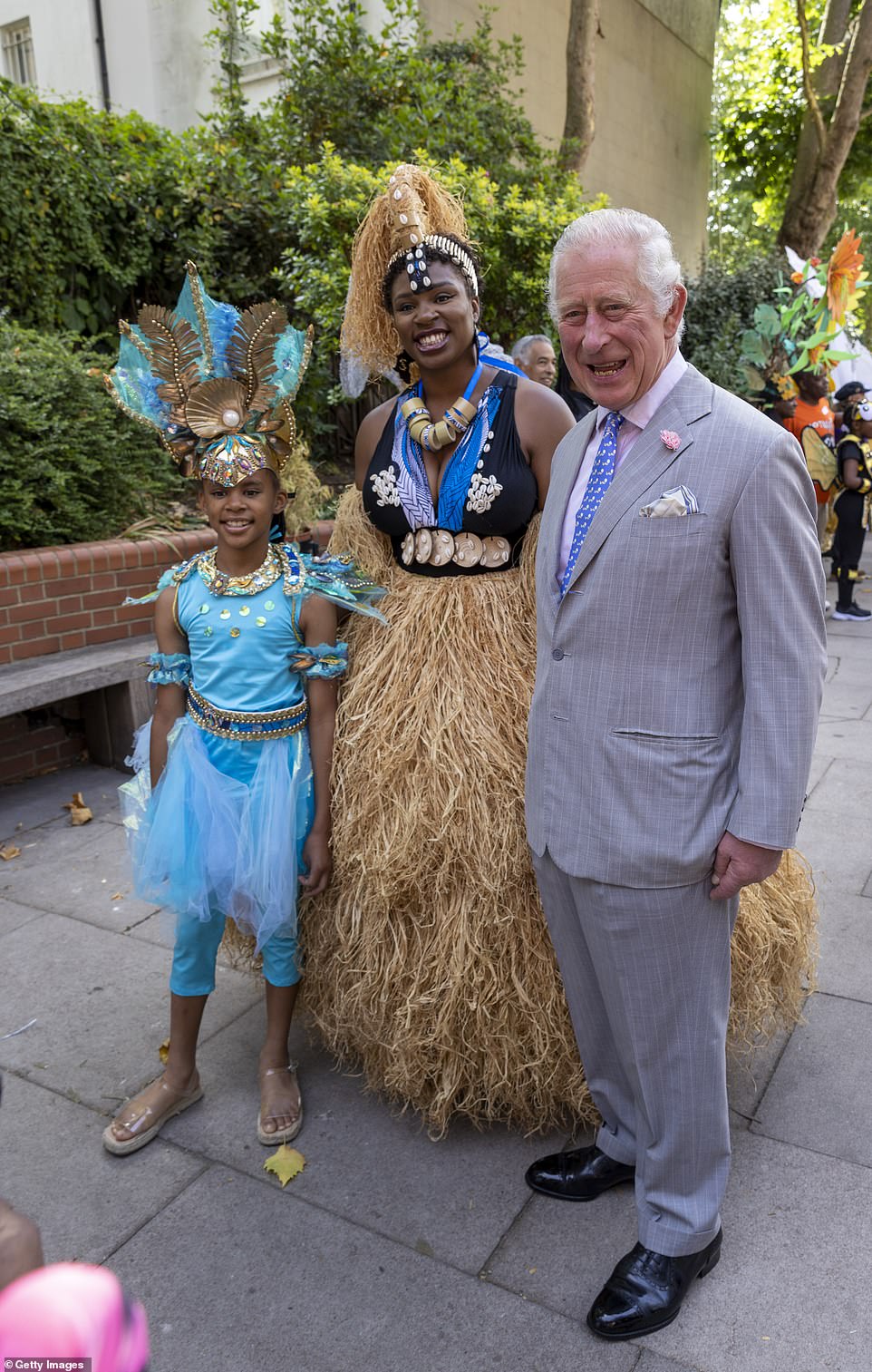 Charles, 73, appeared to enjoy his day out as he hailed the importance of Notting Hill Carnival

The Prince of Wales also smiled for snaps with performers who were dressed in stunning carnival outfits.

Not forgetting the people who keep things running smoothly from behind the scenes, Charles and the Duchess of Cornwall made sure to chat with the organisers of the event too.

Taking a little break to chat to organisers, Camilla was filmed having a natter with some members of the Tabernacle Seniors Group, who meet every week, while they fanned themselves in the blistering heat. 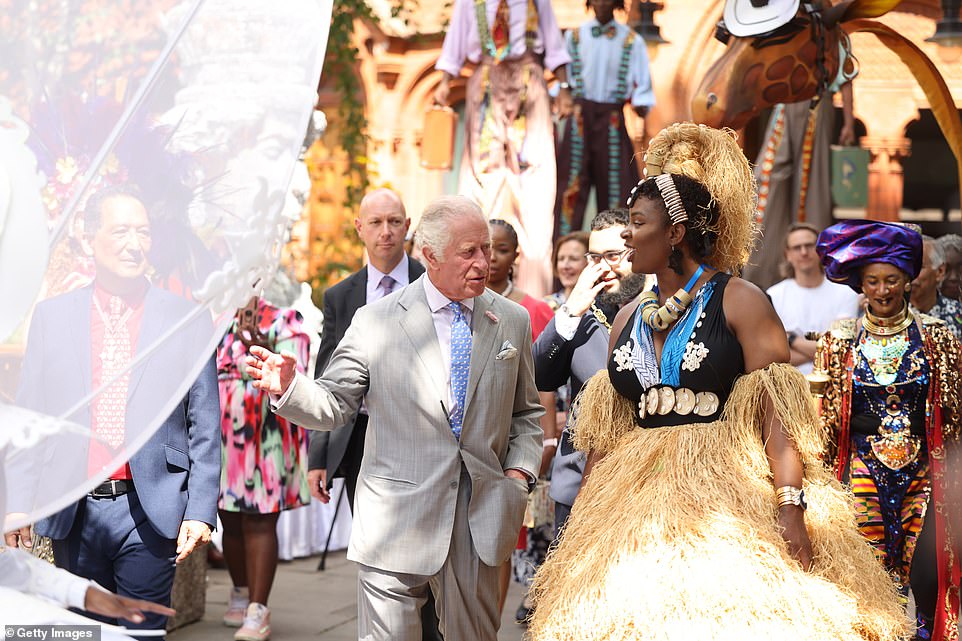 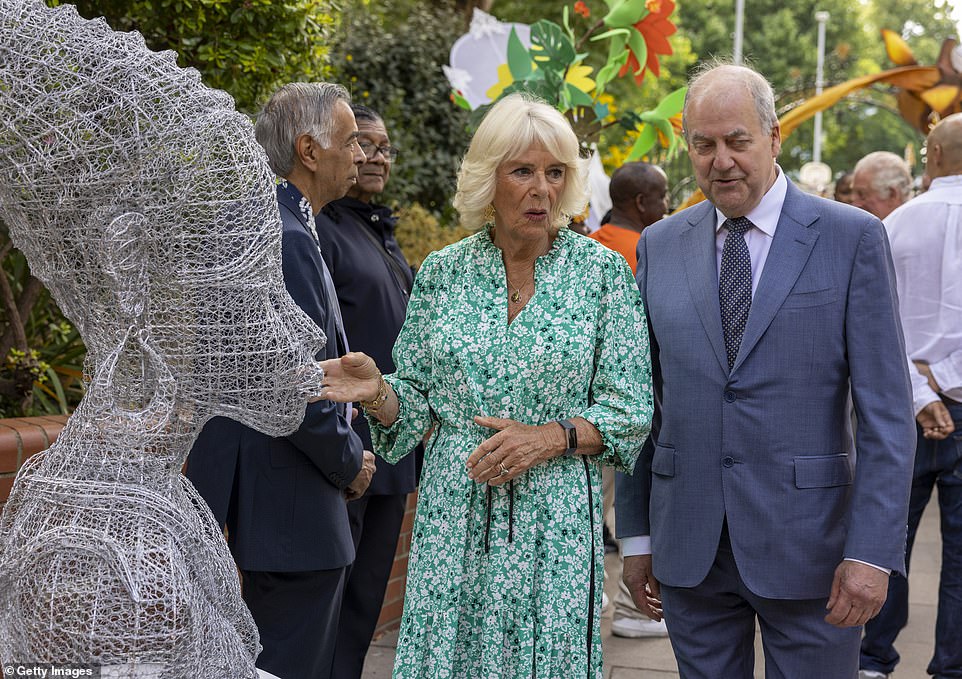 Camilla, who turns 75 this week, was wished a happy birthday by people who came out to meet her 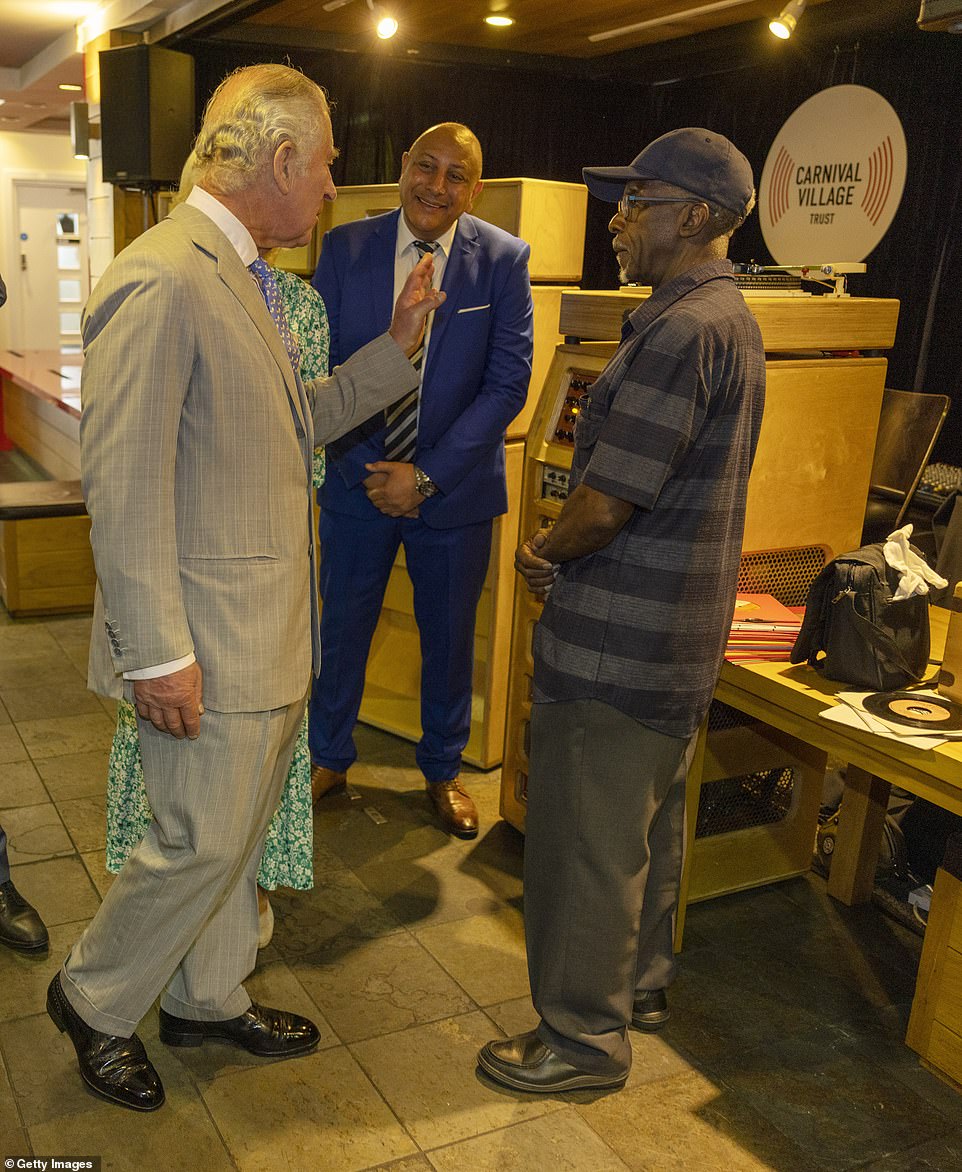 Not forgetting the people behind the scenes, Charles and Camilla also met with organisers who ensure the carnival runs smoothly 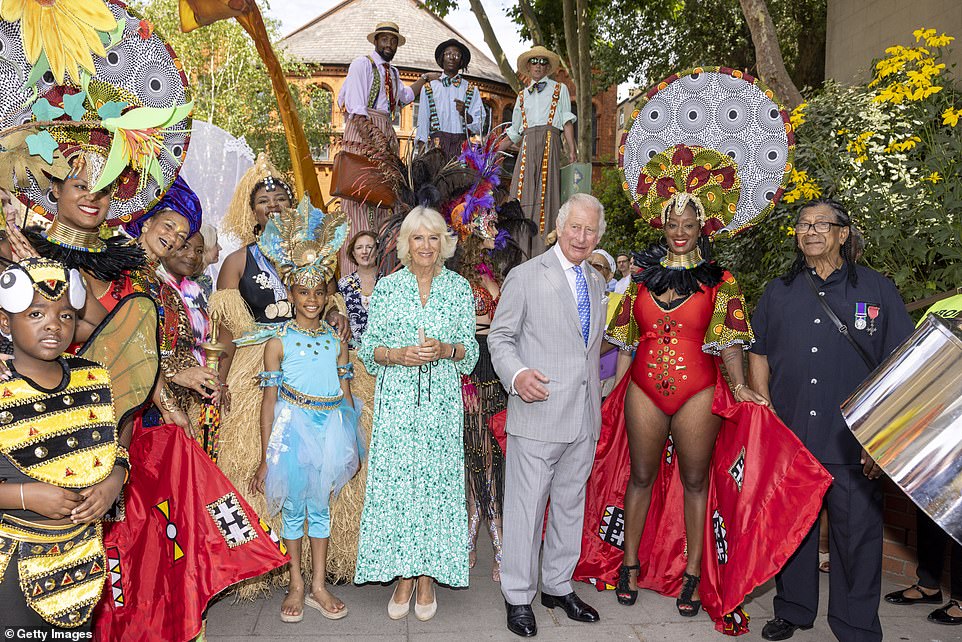 All smiles! Charles and Camilla beamed as they posed with organisers and performers who will take to the streets of Notting hill this August

She then shook hands with people who had come to see her and the Prince of Wales while they wished her a ‘Happy birthday’.

The Duchess of Cornwall will celebrate her 75th birthday on Sunday.

To mark the occasion, a documentary about Camilla will air on ITV at 9pm this evening.

Camilla’s Country Life will take an intimate look at the Duchess of Cornwall and her relationships with her nearest and dearest.

It will follow her as she takes on guest editorship of Country Life Magazine.

The documentary is expected to explore Camilla’s ‘risque’ sense of humour and the nervousness she sometimes feels before making big public appearances.