Sexual harassment is prevalent among the nation’s policy-makers yet there is a widespread reluctance to report it, a new survey of Commonwealth public servants finds.

Less than a third of those who saw or experienced sexual harassment in their workplace reported it, a union survey of 3280 public servants found. 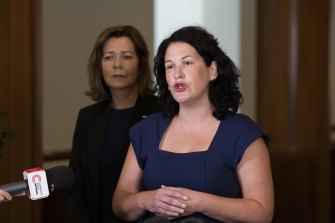 Of those who did report harassment, only about a third said the response was satisfactory. The findings are similar to an earlier survey of political staffers.

Survey respondents said complaints were “laughed off” or seen as an over-reaction or inappropriate.

The biggest reason for not reporting harassment was a fear their manager wouldn’t investigate or treat the matter impartially, with nearly one in three saying this stopped them. Another one in six said they didn’t think reporting the matter would change the situation and a similar proportion said they were worried it would affect their career.

One person working at the Department of Finance, who asked not to be identified, said their experience of reporting a sexual harassment incident they had witnessed had put them off ever doing so again because it was a “waste of time”.

They reported a male colleague for showing female employees an explicit image he had been sent by a male contractor. The contractor was subsequently sacked but the permanent employee “was given a slap on the hand and told to go back to work” without any consultation with the women involved, the public servant said.

“They are more interested in the department’s reputation than dealing with the real issue,” they told The Sydney Morning Herald and The Age.

A Finance spokesman said the department takes all allegations of inappropriate behaviour seriously and has a zero-tolerance policy towards sexual harassment.

“The response to allegations of inappropriate behaviour are tailored according to the individual circumstances of the case and may include engaging external expertise to investigate the allegations,” the spokesman said.

The Community and Public Sector Union is proposing a new victim-centric framework for dealing with sexual harassment within the public service. It wants all departments to sign on.

Union members had repeatedly raised sexual harassment and gender issues with departments over the year since the report’s public release but “no real action” had been taken.

The government responded to [email protected] earlier in April, accepting 40 of its 55 recommendations in full and accepting in part or noting the others.

“The APS, like all employers, have an obligation to create safer workplaces, and our members want to work with them to do that,” Ms Donnelly said.

“The problem is not that women are failing to propose solutions. The problem is that the government and employers are not listening.”

Only a quarter of those surveyed said they had attended training on sexual harassment in their current workplace, although 56 per cent said they knew what education was available. More than half said they weren’t aware harassment witnessed by third parties should be reported.

“Having policies is one thing, talking about them is another thing,” one survey respondent said.