Rishi’s ‘austere billionaire’ mother-in-law! Akshata Murty’s mother Sudha is an ‘underestimated force’ who made her daughter drop out of a school play rather than buy her a costume and has a ‘100% no shopping policy’

As the wife of Prime Minister Rishi Sunak, Akshata Murty is one of the most influential women in the UK.

But when it comes to her personal life, the billionaire heiress, 42, relies heavily on her mother Sudha, according to those closest to Akshata.

Earlier this week, Tatler published a new profile on the mother-of-two – which was reportedly given the green-light by Akshata herself.

As well as delving into how Ashata has redecorated the No 10 in a ‘far less glitzy way’ than Boris and Carrie Johnson, friends of the PM’s wife also described children’s author Sudha, 72, as the ‘underestimated force in her daughter’s life’. 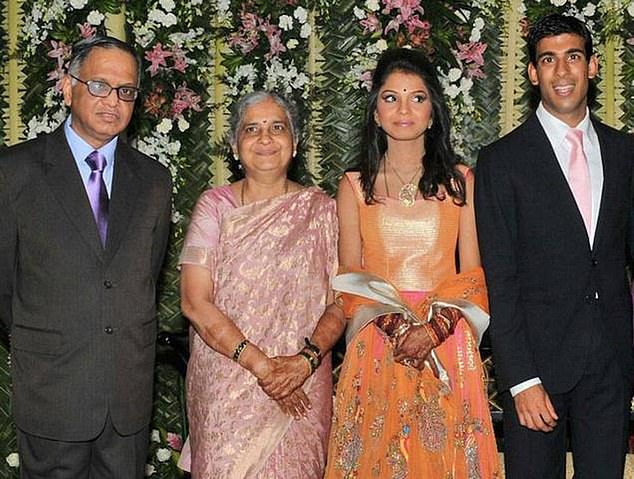 Rishi Sunka and Akshata pictured on their wedding day in Bangalore in 2009 with the bride’s parents Sudha and Narayana Murthy, who has been dubbed ‘India’s Bill Gates’

Here FEMAIL delves into the author’s doting yet ‘austere’ parenting style and how she has adopted a ‘100% no shopping rule’ – despite her husband’s estimated £4bn fortune.

Born in August 1950, Sudha grew up in the small village of Shiggaon in south-west India and was the daughter of doctor R.H. Kulkarni and Vimala, a local school teacher.

In her short story A Tale of Many Tales, the author explains how her mother encouraged her to write in a diary everyday – which she now credits as ‘inadvertently improving her expression and adding clarity to her ideas.’

But despite having a talent for writing from an early age, the mother-of-two studied Electrical and Electronics Engineering at college and went on to obtain a postgraduate qualification in Computer Science from the Indian Institute of Science. 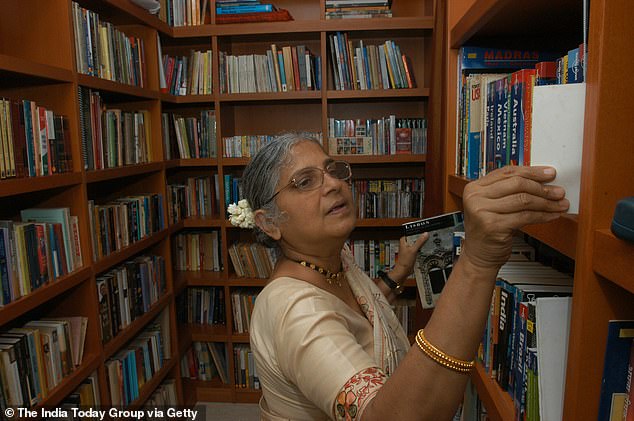 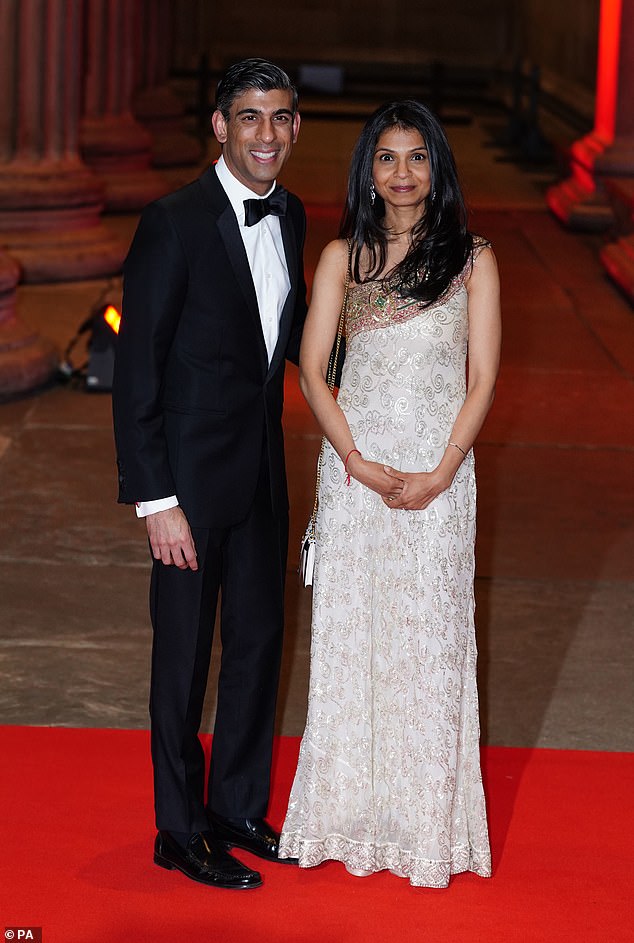 After graduation, Sudha applied for a job as an engineer on Tata automotive production line – despite the fact the advert specifically said it would not consider female applicants.

According to Tatler, Akshata’s mother wrote a ‘feisty postcard’ to the CEO of the company JRD Tata, who was ‘impressed’ by her argument and gave her the job.

It was while she was working for Tata that Sudha met her husband Narayana Murthy, 76, who went on to found the tech company Infosys, which is valued at $85bn.

The publication reports that Sudha wanted to join the company in its infancy but that her husband, who has been dubbed ‘India’s Bill Gates’ due to his role pioneering the country’s tech boom, adopted the policy that married couples should not work together. 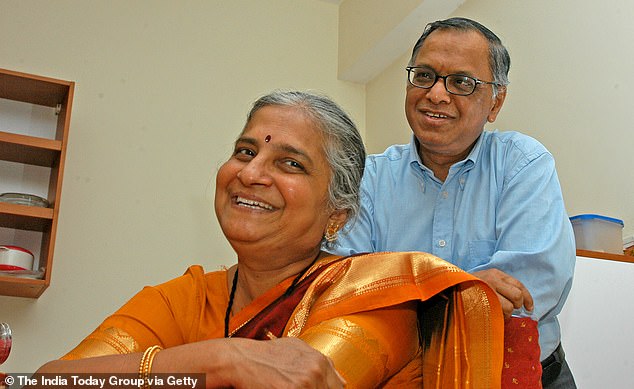 In a 2013 essay, Narayana Murthy praised his wife for teaching their children the ‘importance of austerity’. The couple pictured at Infosys in March 2022 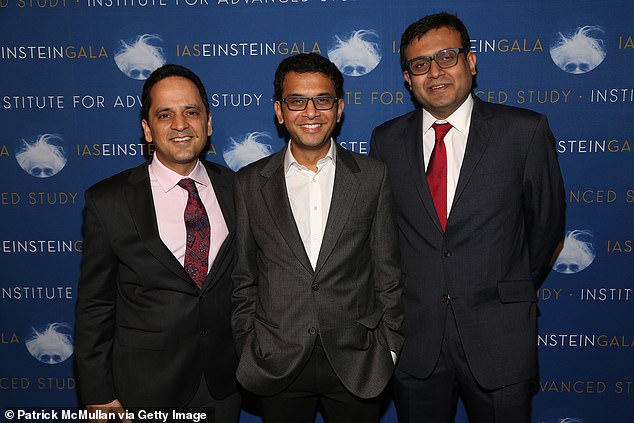 Family friend and journalist Sriram Karri says this prompted Sudha to set up the company’s charitable foundation before going on to forge her own career as a children’s author.

Since 2000, Sudha has written 37 books – including How I Taught My Grandmother to Read, which features on India’s school syllabus.

After having Akshata in 1980 and then son Rohan three years later, the couple decided that their children should spent their early years living with their paternal grandparents in Hubli while they focused on their careers in Mumbai.

In the 2013 book Legacy: Letters from Eminent Parents to Their Daughters, Akshata’s father Narayana explained how he would have to board a plane and then hire a car every weekend to spend time his children but ‘couldn’t do without’ seeing them.

Elsewhere in the deeply personal letter, Narayana praised his wife for teaching their children the ‘importance of simplicity and austerity’. 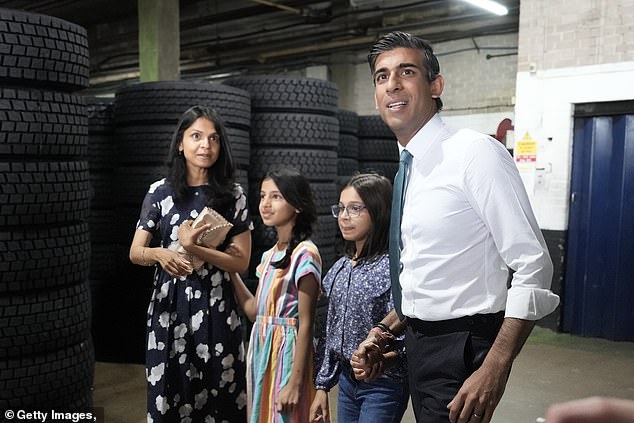 Rishi Sunak pictured with Krishna, Anoushka and Akshata during his leadership campaign 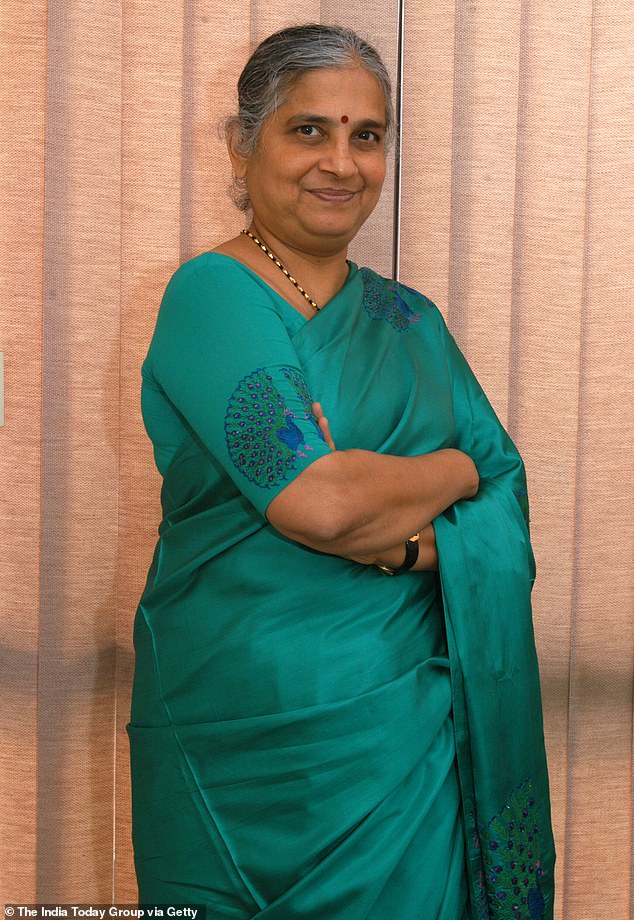 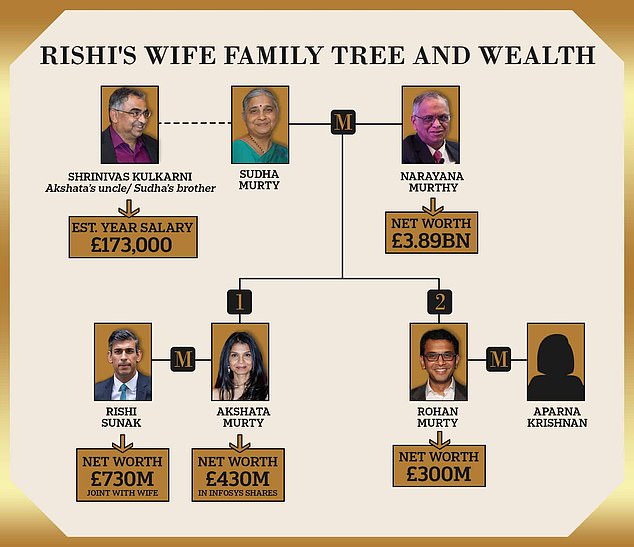 While the family were living together in Bangalore, the father explained how Akshata was given a role in her school play which required a new dress.

At the time, Narayana was still setting up Infosys and he says they did have the funds to spend on ‘non-basic goods’.

As such, Akshata could not be part of the performance – something her father says taught her an ‘important lesson’ and the value of ‘austerity’.

When the business started to take off years later, the father says he suggested the children were driven to school – but Sudha insisted they still take a autorickshaw with their classmates.

In a previous interview, Sudha said one of her key parenting lessons was to ‘teach children that money doesn’t make a person extraordinary’. 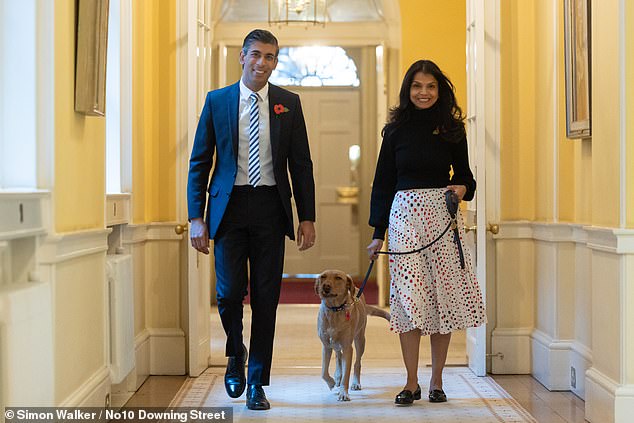 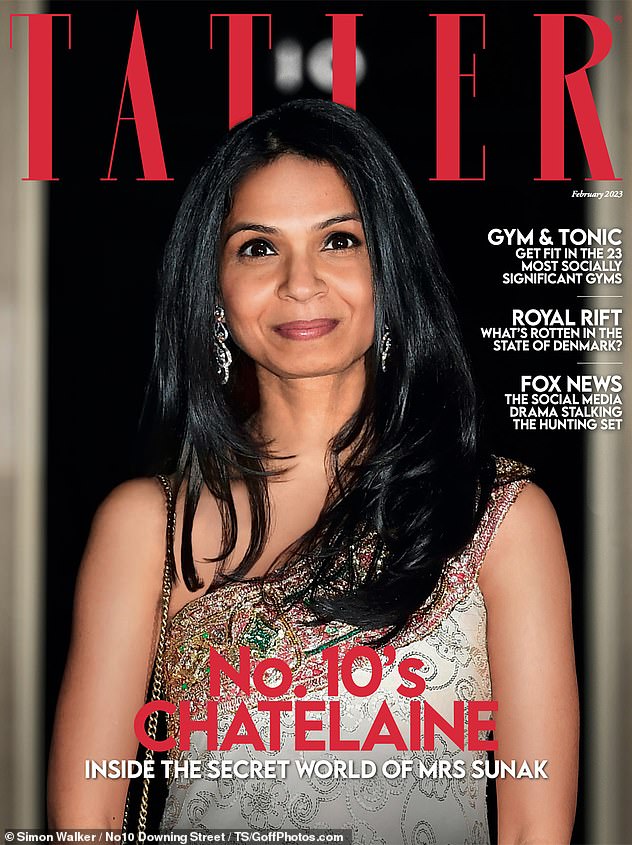 Despite the Tatler profile stressing Mr Sunak and Ms Murty want a less flashy home, it says they have ‘velvet sofas’ in ‘jewel colours’ and ‘opulent’ curtains in the historic property

What’s more, Sudha told the Voice of Fashion in 2018 that she has adopted a ‘100% no shopping policy’ and hasn’t bought a sari in over 20 years – instead choosing only to purchase essentials.

She explained: ‘When my mother passed away 6 years ago it took us just half an hour to give away the things in her cupboard because she had just 8-10 sarees in it. When my grandma passed away 32 years ago, she had just 4 sarees.

‘They travelled light on this earth and since that has been part of my upbringing, I found it easier to adopt a simpler life with fewer possessions.’

Perhaps taking inspiration from her own mother, Sudha insisted that there was no TV in the house to create an ‘environment conducive to learning’.

The father recalls how his wife insisted that the family spent two hours every night in each other’s company doing something ‘productive’. 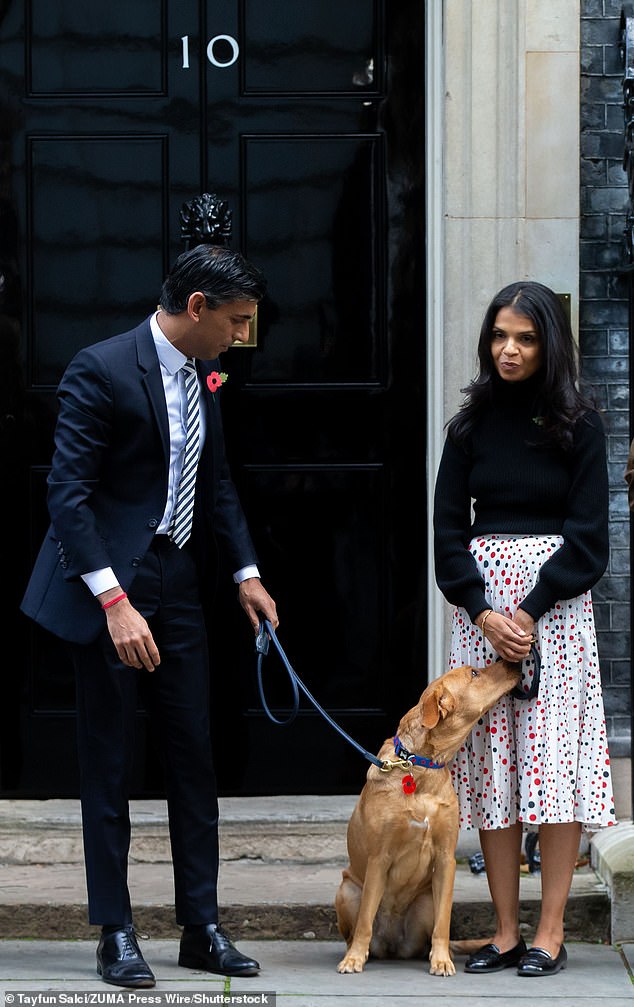 So while did their schoolwork, Sudha and Narayana would read history, mathematics or engineering books.

In 1998, Akshata moved to Los Angeles to read Economics and French at Claremont McKenna College before later enrolling at Stanford, where she met future husband Rishi Sunak.

In 2009, they married in Bengaluru, India – and shortly afterwards, the couple moved from India Santa Monica, a beachside suburb of Los Angeles where Rishi helped set up an investment firm called Theleme Partners.

They still own a £5.5million penthouse boasting panoramic views of the Pacific Ocean where the family occasionally holidays.

It is part of a property portfolio that now includes a £7million mews house in Kensington, a £1million flat nearby in Brompton Road and a £1.5million manor house in Mr Sunak’s Yorkshire constituency, which the couple purchased after he won William Hague’s old seat at the 2015 election. 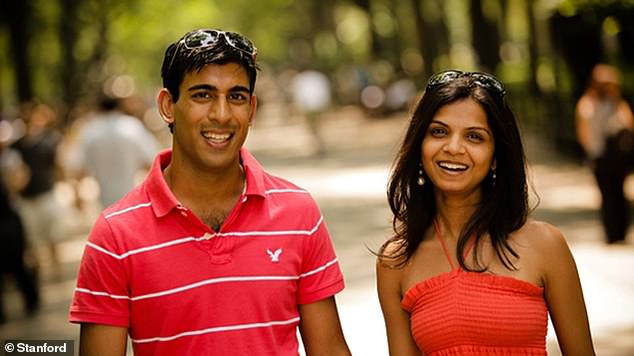 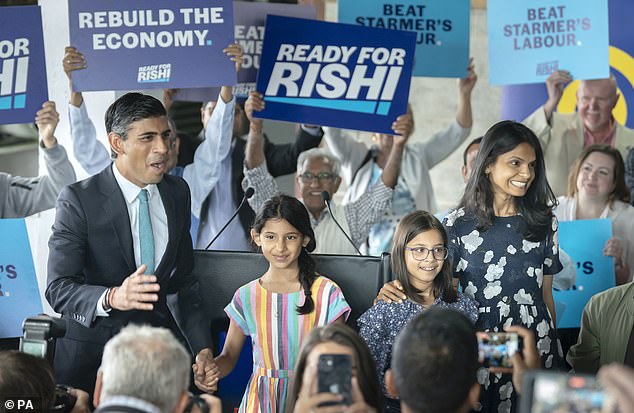 With an estimated net fortune of £730million that includes multiple properties in Britain and the US, a string of business interests and even a fleet of cars including a ‘high-spec’ Range Rover, a ‘top-of-the-range’ Lexus and a BMW, the Oxbridge former Goldman Sachs banker and his Stanford-educated spouse are by far the wealthiest occupants of Downing Street in history.

Indeed, Ms Murty is said to be wealthier than even King Charles III due to her £430million stake in her billionaire tycoon father Narayana Murthy’s IT empire.

She has also continued to hold stakes in businesses over the years including a joint venture with Amazon, Cloudtail, in India worth £900million a year, a project she and Rishi set up together, Catamaran Ventures UK, shares in the firm which runs Jamie Oliver’s Pizzeria and burger chain Wendy’s in India, and Etonian tailor New & Lingwood, which makes pupils’ tailcoats costing £2,500 each.

Rishi’s father-in-law, dubbed ‘India’s Bill Gates’ due to his role pioneering the country’s tech boom, was recently ranked the sixth richest person in India and the 654th in the world after his remarkable success in founding Bangalore-based IT firm Infosys in the 1980s, now a £9.6billion multinational that employs more than 345,000 people.

At their daughter’s wedding to Rishi in 2009, more than 1,000 guests were invited, including Indian actor Girish Karnad, cricketers Anil Kumble and Syed Kirmani, former champion badminton player Prakash Padukone, business tycoon Azim Premji, known as the tsar of the Indian IT industry, and billionaire entrepreneur Kiran Mazumdar-Shaw, chair of a biotechnology company based in Bangalore.

Akshata then went on to create her own eponymous fashion label in 2011 – a move that mystified her mother.

Speaking to Vogue India following the brand’s launch, Akshata said: ‘My mother, a no-nonsense engineer was always baffled why I would spend so much time creating different outfits from my wardrobe.’

Despite her huge fortune, Tatler reports that Sudha is ‘well-known for dressing simply in clothes belying her immense wealth’.

According to family friend Sriram Karri, Sudha ‘doesn’t understand’ her daughter’s love of fashion ‘at all and they argue about it, but in a humorous way’.

He referenced one argument when Akshata told her mother: ‘‘You can afford to wear a very simple dress because everyone knows what you stand for. I can’t afford to go to an interview in a bad dress!’

In a 2012 interview with Live Mint, Sudha admitted that Akshata becoming a designer was ‘unusual’ but ‘that is what she seemed to love’.

Clearly a hands-on granmother, Sudha revealed that she ‘couldn’t wait’ for her daughter’s children to be old enough to appreciate her stories.

Elsewhere in the profile, friends stresses the couple’s desire to foster a lower-key image, even though they are renowned as among the richest in politics.

The couple have chosen to occupy the smaller flat above No10 that they refurbished at their own expense when he was Chancellor. They live there with daughters Krishna, 11, and Anoushka, nine.

By contrast the Johnsons followed the example of other recent premiers by using the larger apartment over No11, which they overhauled with the help of an interior designer.

Despite the Tatler profile stressing Mr Sunak and Ms Murty want a less flashy home, it says they have ‘velvet sofas’ in ‘jewel colours’ and ‘opulent’ curtains in the historic property.

John Challis, an upholsterer from Mr Sunak’s Richmond constituency in North Yorkshire who has been employed by the couple, described how George Osborne’s ‘very tired’ furnishings in the No10 flat were updated.

‘We made long, fully interlined curtains for all five windows overlooking the garden, hand-pleated and held back with heavy co-ordinating tassels in red, gold and the ivory of the damask,’ he said.

‘The ornate cornicing was hand-gilded and a rug was commissioned to almost fill the room. Akshata was very involved and keen to see how things are made. She is also not afraid of getting stuck in and helping either.’

There are ‘opulent curtains in the entrance areas’ and window seats in most rooms of the flat.

‘Most of the sofas are velvet, in jewel colours, and the cushions also became a work of art,’ Challis added.

Ms Murty is said to be intent on bringing ‘more of the north to Downing Street’.

She added: ‘Over the summer, during the first leadership campaign, it was bruising for her, and the entire family hunkered down in the constituency, and it put its arm around them.’

The February issue of Tatler is on sale from Thursday, January 5

Duchess Hollywood! Value of Meghan Markle’s wardrobe boomed to £79,000 in 2022 – despite stepping back from royal duties

Case of the VERY accomplished ex! American Dara Huang, mother of Princess Beatrice’s stepson who spoke out about US school shootings, is a Harvard-educated architect whose immigrant parents taught her to ‘fight for a better life’

Kate’s most expensive fashion year yet! Princess of Wales wore a record £176,664 worth of new clothes in 2022