Father, 40, told he was ‘riddled’ with cancer and had just weeks to live loses his battle with the disease just nine days after marrying his long-term girlfriend in an emotional ceremony

A father has died of cancer just three weeks after being diagnosed.

Jamie Christie, 40, who worked in a steel plant in Scunthorpe, Linconshire, lost his battle with the disease on November 12, nine days after marrying long-term girlfriend Sophie Christie in an emotional service.

Friends and family rushed to organise the wedding after Jamie, who has an eight-year-old son, discovered on October 21 that he had oesophageal cancer which had spread to his spine, liver, and other organs. 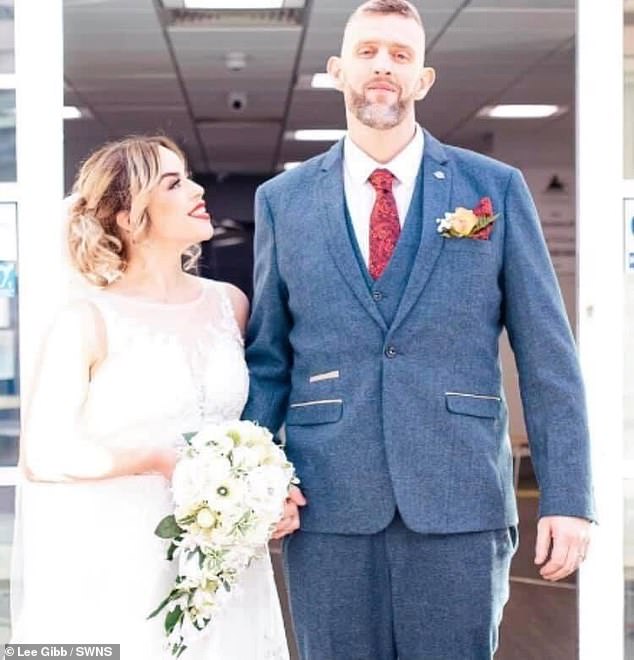 Jamie Christie, 40, from Scunthorpe, who was diagnosed with terminal cancer died aged 40 just nine days after his wedding to his long-term girlfriend, Sophie Christie, on November 3 (pictured) 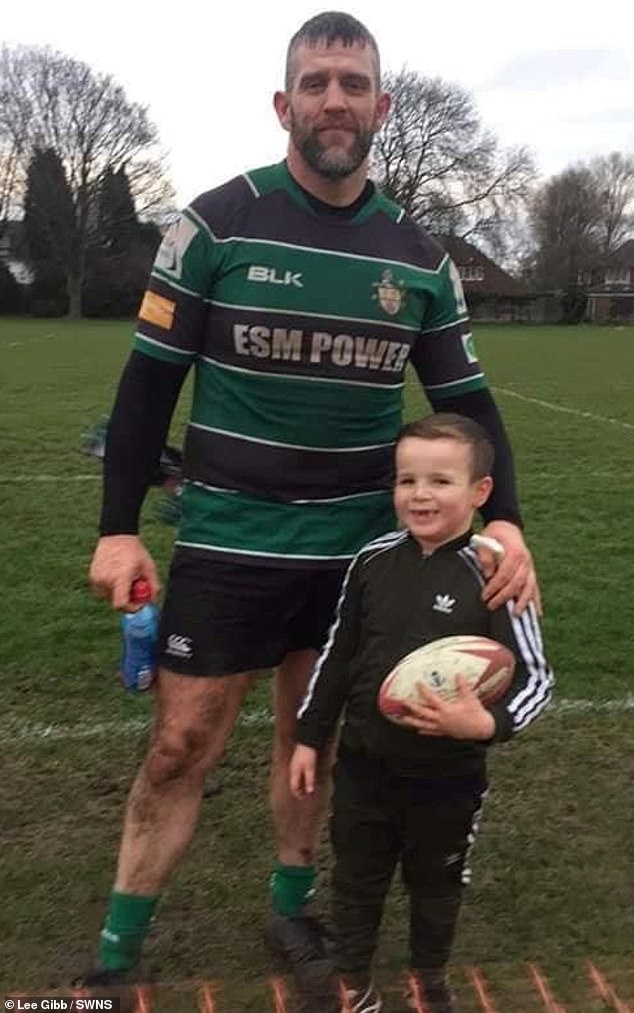 Jamie, pictured with his son Dudley, eight, died on November 12, nine days after his wedding, and Lee and his other close friends were informed soon after

His close friend Lee Gibb, 40, said it was ‘crazy’ how quickly his health had declined.

Lee said: ‘He was probably one of the fittest people you’ve ever met in your life.

‘He was a gym enthusiast, he was a boxer, and he used to play rugby for Scunthorpe rugby club. He was a sportsman, and he didn’t smoke. It’s just been absolutely crazy.’

Lee explained ‘gentle giant’ Jamie was diagnosed after he went to the doctors when he started vomiting blood.

He continued: ‘They then gave him two to eight weeks to live – he was absolutely riddled with cancer. The doctor has even said, “We can’t believe he’s stood in front of us.”‘

Within a matter of days, Jamie’s friends put a plan in place for him to wed his long-term girlfriend, Sophie, who he’d been with for years.

The couple chose Scunthorpe Rugby Club as their marriage venue, where Jamie played regularly, and the event was fixed for November 3. 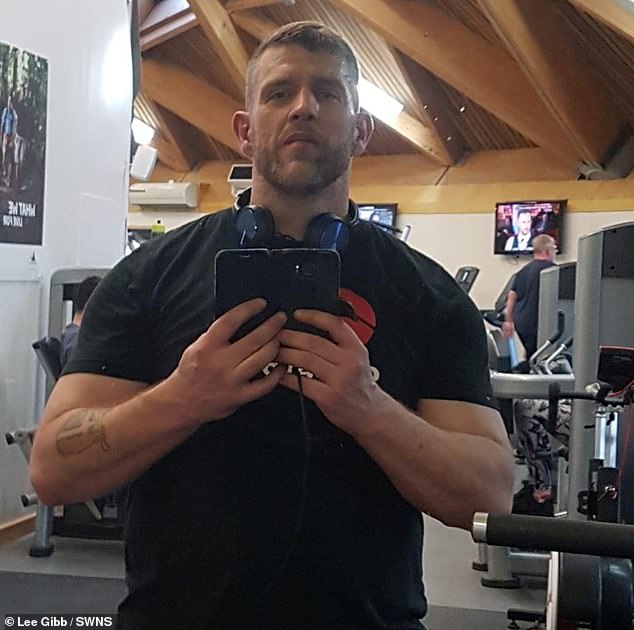 ‘Gentle giant’ Jamie, who worked at the Scunthorpe Steel plant, was first diagnosed with cancer on October 21 after he went to see doctors despite being one of the ‘fittest people you’ve ever met’ 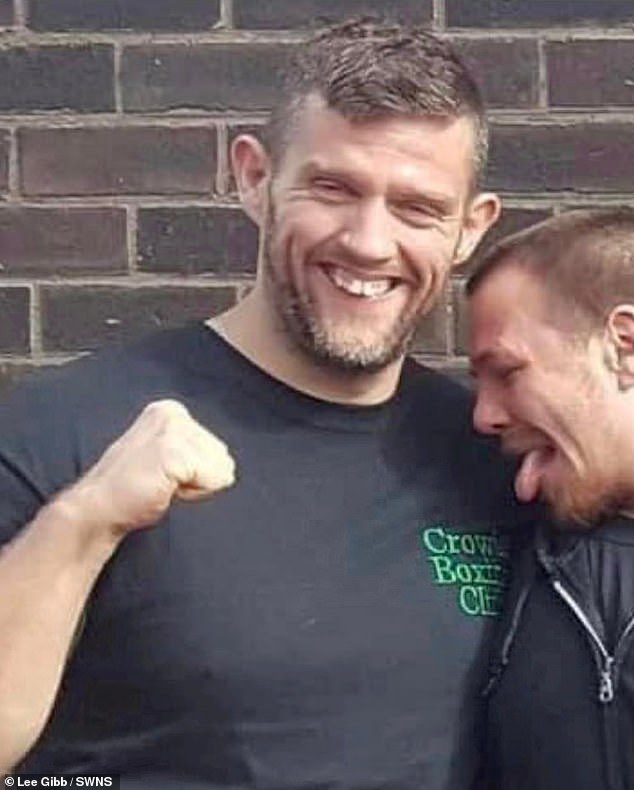 WHAT IS OESOPHAGEAL CANCER?

Oesophageal cancer is a disease caused by tumours growing in the food pipe between the mouth and stomach.

The cancer is most common among people in their 60s and 70s and affects more men than it does women.

Oesophageal cancer can be hard to spot because it doesn’t cause any symptoms in its earlier stages, and only becomes noticed once the tumour has grown.

Symptoms may include difficulty swallowing, persistent indigestion or heartburn, loss of appetite, weight loss, and pain in the torso, chest or back.

Survival rates are not high for oesophageal cancer, with only 12 per cent of people surviving for 10 years after a diagnosis.

Six out of 10 patients die within a year of being diagnosed, according to Cancer Research UK.

The exact cause of the disease isn’t well known but smoking, drinking too much alcohol, being overweight or having an unhealthy diet are believed to increase someone’s risk of getting it.

On the day itself, Lee said that despite his physical struggles, he’d never Jamie looking so happy.

He said: ‘I’ve never seen him smile so much in my life, and I’ve known him for 30 years. You could see that the cancer was attacking him, and you could see his weight loss and the tiredness in his eyes and everything else.

‘But the smile on his face will stay with me for the rest of my life. He just smiled from morning until night.’

He added: ‘Jamie was just a strong character. He didn’t whinge about what was going on. He didn’t shed a tear at the wedding about it. He just stayed strong all the way through to the end.’

Lee said that though they did everything they could to make it a celebratory day, for many at the event, it also felt like a final ‘goodbye’.

‘We had him up singing, we tried to make it the best we could for him, but it was also a goodbye for a lot of people as well.

‘It was a crazy day, but we all put our brave faces on for Sophie and Jamie and celebrated the wedding.’

Jamie died on November 12, nine days after his wedding, and Lee and his other close friends were informed soon after.

He said: ‘Jamie passed on the Friday at 9:45 at night. The family kept it quiet until the Saturday morning, then we rang each other. We all met at the pub on Sunday and raised a glass to him.

He added: ‘Our social media in our area has been taken over by Jamie since he passed away. It’s just everywhere and everyone. I’ve never seen anything like it after someone’s passing.’

Since his death, Jamie’s friends have set up a donation page to help his wife and eight-year-old son.