Professional scientists have suffered pay cuts, longer working hours and a sharp fall in morale as they dealt with the coronavirus pandemic, with warnings that experienced practitioners could leave the sector altogether.

The annual survey of professional scientists, released on Monday, shows almost two-thirds reported a drop in morale over the past year, while more than 70 per cent suffered fatigue just as the sector was called on to come up with solutions to the largest pandemic in a century. 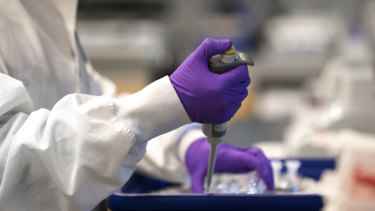 Professional scientists have reported a sharp fall in morale, an increase in hours and less pay as the pandemic pressured the entire sector.Credit:Getty

The survey, based on the response of almost 1300 scientists working in areas from construction to defence, showed COVID-19 had led to an increase in demands.

Average hours across the survey group increased to 44.6 a week while overtime lifted by more than 22 per cent from the previous survey. Almost 59 per cent said they did not receive any extra pay for overtime.

About 40 per cent of respondents said they had not had a pay rise in the past 12 months, compared with less than 28 per cent in the previous year’s survey. Seven per cent reported taking a pay cut due to the pandemic.

Almost half of the scientists said their total remuneration was now falling behind market rates while 43 per cent said their pay did not reflect their level of responsibility.

Science and Technology Australia chief executive officer Misha Schubert said an increase in science investment was necessary to avoid the loss of people from the sector.

“There’s a huge risk that many more of our brilliant scientists will hit breaking point and just walk away if we don’t fix this broken system of insecure work,” she said.

Staff morale has taken a battering across the sciences. The survey found 62.5 per cent of respondents agreed there had been a fall in morale over the past 12 months, compared with 45.8 per cent in the previous year’s survey.

Seventy per cent said fatigue had increased compared to 54.6 per cent a year ago while 21.5 per cent said they were suffering anxiety or mental distress due to the pandemic and its impact on their ability to work.

One in five respondents said they planned to leave the profession completely within a few years. The previous survey showed 18.3 per cent of people preparing to leave.

President of Science and Technology Australia Jeremy Brownlie said the pandemic and precarious work circumstances had squeezed the nation’s scientists.

“Australia’s scientists have prevented a vast number of deaths in this pandemic – yet our country isn’t supporting them nearly well enough in return,” associate professor Brownlie said.

Liam Mannix’s Examine newsletter explains and analyses science with a rigorous focus on the evidence. Sign up to get it each week.