A Melbourne artist has launched a legal assault on the Australia Council, the country’s premier arts funding body, accusing it of discriminating against them as a single, queer mother and damaging their career and career prospects on “ethically suspect” grounds.

In court documents Casey Jenkins claimed that funding for a 2020 online performance piece called Immaculate, documenting their attempts to become pregnant with donor sperm, was abruptly cancelled due to the Council’s fear of the reaction from unnamed individuals “within and/or external to Australia Council”.

The cancellation was decided barely two hours after Jenkins’ project was heavily criticised by Peta Credlin on Sky News, the artist said. 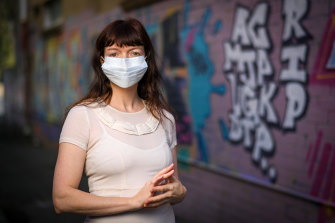 Casey Jenkins in August 2020, just before they began their performance piece Immaculate.Credit:Eddie Jim

Documents obtained separately under FOI by The Age reveal that a day earlier the office of arts minister Paul Fletcher had emailed the Council, under the subject heading “flagging media interest in controversial grant recipients”, asking for “clarification on funding including … who made the decision [and] the criteria it met to be considered art”.

Jenkins has begun legal action in the Federal Court against the Council demanding an unreserved apology and that the Council’s CEO and chair undergo “intensive training” on gender equity, LGBTQIA+ rights, and unconscious bias.

They seek damages from the Council for “defamation and/or injurious falsehood, breach of contract and breach of a duty of care”, as well as a declaration that the Council’s decision to withdraw the funding was unlawful or unfair.

They also want the court to order the Council to introduce representation quotas for its board and management.

Earlier in 2020 the Council had approved around $12,000 in cash for Immaculate from a fund that supports “challenging new concepts” in emerging and experimental art.

Court documents filed by the artist said Jenkins “knew that presenting such an intimate documentary artwork in real time, while also undertaking the physical and emotional challenges of trying to conceive, would be challenging, particularly in light of the bigotry and prejudice likely to be directed towards her, and the bemused, hostile reaction often directed towards art of that kind”.

“[Jenkins] decided she would be too vulnerable to present and publicise such a work without the backing of established art organisations.”

But after Credlin “excoriated” the artist on Sky News, the court document said, just two hours later the Council decided to withdraw funding.

As a result, according to the legal claim, the artist “suffered physical, psychological, economic and reputational harm”.

The court document alleges the “real reason” the Council withdrew support and funding for Immaculate was “because of the actual, perceived or feared reaction and/or actions of individuals… in response to the media publications”. It did not name the individuals.

The Council has said it consulted lawyers after the matter was escalated to the [Council] executive and, in a letter to Jenkins, concluded it “cannot be party to any act that could result in bringing a new life into the world” and that “the ethical issues that will inevitably surround this project, possibly for years to come, are not something the council can take responsibility for”.

However the artist disputed these “justifications”, saying in court documents the Council “knew its real reasons were legally and/or ethically suspect”.

Both Jenkins and an Australia Council spokeswoman said they could not discuss the case as it was before the courts.

Jenkins is continuing Immaculate with regular online instalments. In the videos a glowing neon sign alternates between “Immaculate” and “Desperate”. The most recent, wordless video reports she achieved a “chemical pregnancy”, an early pregnancy loss that occurs shortly after implantation. The next cycle is “coming soon”.

The case is next due before the court on May 14. The Council is due to file its defence at a later date.