Home » Lifestyle » Shining a light on a new mystery: can you collect performance art?

In the gloom of the NGV’s Gothic gallery, performance artist Emile Zile clicks on a high-powered hunting torch.

The beam bounces off mirrors held by the audience and lands on the carved faces of saints. In this flickering glow, the looming figures regain the mystery and terror they projected in medieval candlelight. 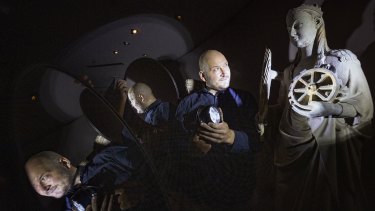 This new work, commissioned for the Triennial Extra program, is a meditation on time, light and symbolism.

But it’s also shining a light on a major change of direction for the gallery: it has determined that performance art must be part of its permanent collection.

“Not just as something that happens at the [exhibition] opening, with the hors d’oeuvres, in the corner. Let’s say, ‘this is actually an artwork, and it’s part of the exhibition’.”

The NGV’s formal collections policy, approved by the gallery’s trustees in 2019, now enshrines performance art as a priority for future acquisition.

It’s in response to increasing acceptance and appreciation from audiences steeped in the “experience economy”, and a growing number of contemporary artists like Zile who work in many different media including performance when pursuing an idea, says Wallis.

But it requires a change of mindset at institutions. And it poses a big problem.

If a museum is supposed to be a permanent repository for art, how do you store a performance? Where do you put it? What, actually, is it?

To tackle this question NGV has joined a three-year project, beginning next month, in partnership with Britain’s Tate museums, the University of New South Wales, Art Gallery NSW and Monash University Museum of Art. Funded by a $400,000 Australian government grant, they aim to solve problems around “the dematerialisation of art”.

“Museums have had hundreds of years to develop structures and processes and staff whose primary expertise is to deal with objects,” says Wallis. “For us to work with performance art is thrilling… what we’re learning is you can collect performances, you can deposit them. It’s being collected at institutions around the world – places like MoMA [in New York] and the Tate are really far ahead in this.

“What they collect is essentially the knowledge and ability and right to re-perform it in the future.”

As part of the project the NGV plans to “collect” its first performance art.

In two, five or 100 years a curator will be able to get out ‘the work’ and exhibit it, following archived instructions as to movement, soundtrack or other elements.

It’s like the relationship between a musical score and a performance, says Wallis: “Music has a whole language about how you transmit that knowledge to the performer, but in performance art we’re just learning what that language is”.

The four performance pieces commissioned for Triennial Extra are a chance to put into practice new skills the NGV must learn, Wallis says, in curation, programming, conservation and marketing.

Zile calls himself an “artist, filmmaker and a performer”.

“There are a number of different modes that can be used for an idea,” he says. “With performance there’s an opening for chaos, an opening for mayhem. I really enjoy that energy.”

Performance art “should definitely be alongside the canon of painting, that is so well known and so well seen” in major art institutions, he says. And he loved the opportunity to play in the NGV’s Gothic hall.

“It’s this field full of shadows and unknowing and Dark Ages mystery,” he says. “It’s a peaceful place.”