The loveSICK boat! Awkward moment a bride and groom’s pre-wedding lake shoot is interrupted by strangers who yelled at them NOT to wed, insisting marriage is ‘crazy’ and ‘not worth it’

A bride and groom-to-be got more than they bargained for when they took what should have been a romantic pre-wedding boat ride on a lake in Brazil when they were screamed at by strangers urging them not to marry.

The anonymous couple were drifting along Lagoa de Capitolio in Minas Gerais, looking every inch the blissful newlyweds-to-be when they passed a boat of strangers heading in the opposite direction.

But what initially sounded like shouts of celebration and congratulations soon turned into something far more awkward, when the strangers on the other boat began yelling at the white-clad couple to ‘not marry’. 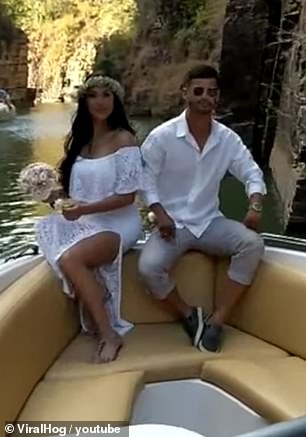 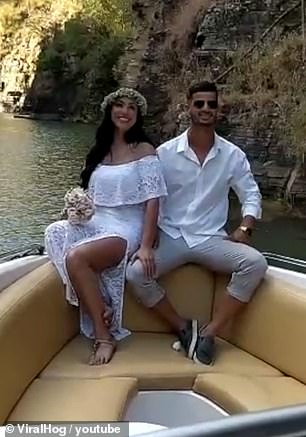 Rough waters! A bride and groom got more than they bargained for during a pre-wedding photoshoot when they came across a group of strangers offering unwelcome advice 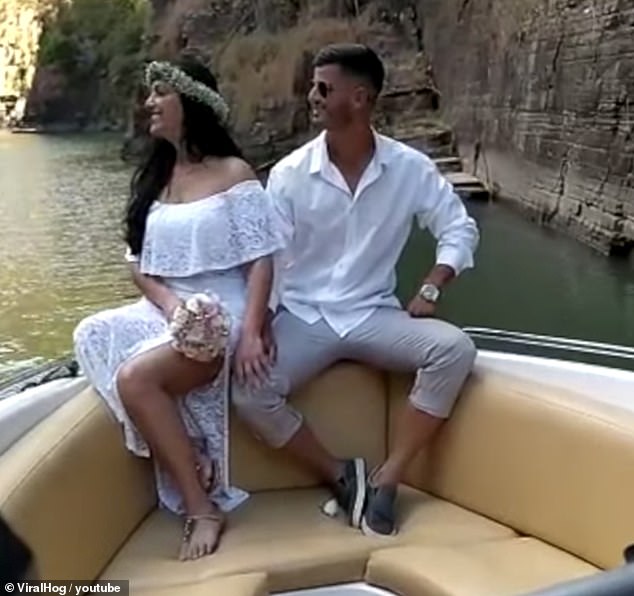 Awkward! The unnamed couple was cruising along a lake in Brazil when a boat full of strangers sailed past and screamed at them not to get married

In a video of the awkward moment, which was posted on social media and YouTube, the confused couple is initially seen posing happily for photos on the bow of the boat while wearing matching white ensembles.

The bride is dressed in a white lace dress and flower crown, while her husband-to-be is seen wearing a pair of khakis and a white button up. Both are grinning happily for the camera when the clip begins.

But after just a few seconds, screaming and yelling is heard in the background, with the words becoming clearer as the strangers’ boat glides past.

‘Ah no, no, no, do not marry! It’s not worth it!’ the group of men and women is heard yelling, according to subtitles added to the clip.

‘Leave this, in the lord’s name, don’t marry!’ another adds, while a final person chimes in: ‘Marry if you’re crazy!’

Both the bride and groom turn towards the yelling crowd with confused looks on their faces initially, before breaking out into awkward smiles as the strangers continue to offer up their unsolicited advice to the happy couple.

At the bride’s behest, the video camera then pans to the boat carrying the screaming strangers, who cruise past the couple as they smile and laugh at the raucous group.

Thankfully, despite the unsolicited advice being thrown their way, the bride and groom don’t seem to let it get them down, simply grinning in amusement at the boatload of yelling people.

According to the caption on the YouTube version of the video, the couple actually found the entire incident fairly amusing and happily shared the clip of the entertaining moment to social media.

‘We were doing the pre-wedding [shoot], and in the beginning, we came across two strangers’ boats where the humorous people started to give us some advice, lol,’ the caption read.

The video also seemed to provide plenty of amusement for viewers, with one even sharing her own story about some pre-wedding advice she had been given many years ago.

‘Strangely, my first marriage at 21, we were in the hotel lobby right after, me still in my dress,’ the YouTube user wrote.

‘This woman saw me and laughed at me and pretty much said how stupid I was. Five months later, he changed his mind for really dumb reasons (basically, he was not husband material, never married again), and broke my heart really badly.

‘I was 15 years younger than him, clueless. I think back to that moment and wish I’d understood her wise words, lol.’