Home » Lifestyle » Sub me in: After four episodes of Vigil I’m ready for our submarine future

Earlier today around 0700 hours (that’s military speak for seven o’clock in the morning), Prime Minister Scott Morrison addressed the nation with news: Australia is getting a bunch of fancy submarines.

Morrison appeared via videolink alongside US President Joe Biden and UK Prime Minister Boris Johnson to announce a pact between the three nations that will see a fleet of nuclear-powered submarines built in Adelaide. 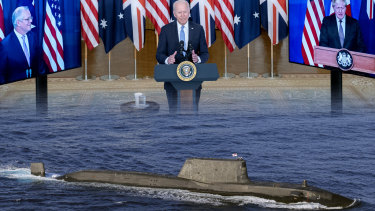 Scott Morrison joins US President Joe Biden and UK Prime Minister Boris Johnson to announce a pact between the three nations that will see a fleet of nuclear-powered submarines built in Adelaide.

Normally such submarine-specific news wouldn’t register on my radar (sonar is the tech of choice for submarines anyway), but fresh from watching the first four episodes of BBC’s latest crime drama, Vigil (on Binge) my subconscious is submarine-heavy. For all those potential submariners whipped up by today’s nuclear-charged announcement, it’s worth watching Vigil to see if you’ve got what it takes. 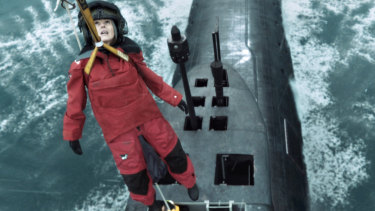 Vigil, the new BBC drama, stars Suranne Jones (pictured) as Detective Chief Inspector Amy Silva, who must investigate the death of a crew member on board the Trident nuclear submarine HMS Vigil. Credit:BBC

Set onboard the fictional nuclear-powered ballistic missile submarine, HMS Vigil, Vigil is classic BBC. There’s a suspicious death, a troubled detective and endless cups of tea. Fans of the show will note, however, that cups of tea are covered in cling film because, well, spillage is a real issue down there.

The detective in question is DCI Amy Silva (Suranne Jones) from the Scottish Police Service, who is sent to investigate the apparent suicide of Chief Petty Officer Craig Burke (Martin Compston).

Conducting a solo mission on a boat full of stern-looking officers, Silva is very much a fish out of water, or more accurately, a DCI under the sea. 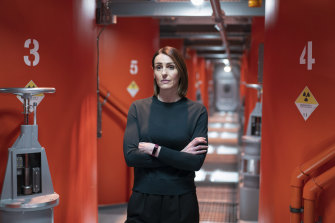 Detective Chief Inspector Amy Silva learns the hard way that surviving life on a submarine is no small feat.Credit:BBC

Given her outsider status, Silva acts as a conduit for the audience, and together we are treated to a crash course in submarine survival.

Are you good in confined spaces? Silva is not (the result of PTSD from a car crash), so when she sees her tomb-like sleeping quarters, she begins to panic.

Generally, the rule seems to be: there’s not much space onboard it, so it can’t be wasted. Every inch must be utilised; every officer must fulfil several roles. It makes you realise that having four Beatles living on the same yellow submarine would be a total waste of resources and space.

You should also brush up on your acronyms or risk being DOA the minute that hatch door slams shut. In the first two episodes of Vigil, I had to pause several times to Google the many acronyms being bandied about.

It turns out “XO” is not a cute kissy sign-off between crew members but stands for Executive Officer, the person typically responsible for managing day-to-day activities on the sub.

Speaking of day-to-day activities, don’t expect much fun while floating 300 metres under the ocean’s surface. “A successful patrol is one in which nothing unexpected happens,” Chief Petty Officer Elliot Glover (Shaun Evans) warns Silva during her induction. Snooze.

But despite all the above, there remains something magical about that murky existence deep below the sea. And while I may be nothing more than a lowly Lieutenant – to be fair, my submarine experience extends to a mere four episodes of Vigil – I am preparing to serve my country by doing what I do best: watching things.

Prime Minister Morrison anticipates that the first shiny new nuclear submarines will hit Australian waters some time in the 2030s. Meanwhile, I will be working my hardest to get up to speed, thanks to these TV shows and films.

The BBC One five-episode miniseries The Deep takes place on a research submarine. The crew are searching for a rare biofuel but remain distracted by the knowledge that the submarine before them went missing.

Based on the 1981 German film of the same name, drama Das Boot is set during the height of World War Two, as an inexperienced U-boat crew tries to survive a secret mission.

The Hunt For Red October, Binge

The submarine genre gets the Wes Anderson treatment with this wonderfully offbeat film that sees Bill Murray hunting a mythical jaguar shark that killed his best friend.

Find out the next TV, streaming series and movies to add to your must-sees. Get The Watchlist delivered every Thursday.