TESCO is selling bags of Minion-shaped frozen potato snacks from McCain for £1.79 and shoppers are raving about them.

McCain revealed it was launching the new treats exclusively at Tesco on Facebook and Twitter on Wednesday. 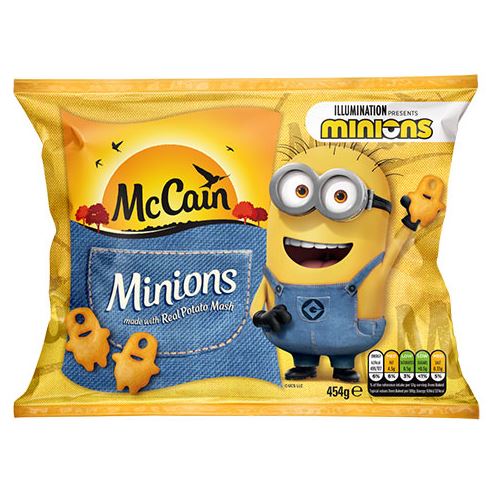 The snacks are shaped like the small, yellow characters which first featured in the hit-animation film, Despicable Me.

Since then, tens of thousands of Facebook memes and products feature the cuddly yellow creatures.

They even starred in their own film, called Minions, in 2015.

We’ve spotted you can order the new grub online at Tesco now.

Shoppers have since shared their excitement on social media about the new spuds, with many saying they’d be perfect for their kids.

One fan posted on the Extreme Couponing and Bargains UK group about the new snack, which received thousands of likes and comments from hungry shoppers.

One commented “I need these”, while another said: “Deffo need to invest.”

If you’re planning on ordering the snacks online as part of your big shop, you’ll have to spend at least £25 and pay £4.50 for delivery.

If you’re planning on taking a trip to Tesco to grab a bag, then you might want to check ahead with your local branch if they have them in stock.

You can find where your nearest store is using Tesco’s store locator tool on its website.

Tesco isn’t the only supermarket which has flogged Minions-themed treats to shoppers.

In 2019, Aldi was selling pieces of ham for 85p with the cute characters’ faces on them.

McDonald’s had an ENTIRE menu devoted to Minions in 2017.

The chain was flogging Minion-shaped potato snacks of its own under the special menu, as well as banana ice-cream in a bright blue cone.

The supermarket has also slashed the price of Silentnight electric blankets worth £30 to £5.