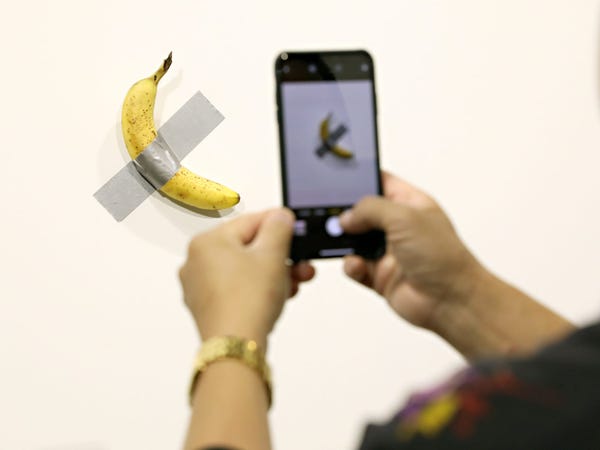 It was the banana that captivated everyone's attention, and now it'll be on display — duct tape included — at a famous New York City museum.

Italian artist Maurizio Cattelan's piece "Comedian" — better known as the banana taped to a wall — is now in the hands of the Solomon R. Guggenheim Museum in Manhattan.

The Guggenheim received the work of art — which sold for more than $100,000 at Art Basel Miami in December 2019 — from an anonymous donation, according to The New York Times.

"We are grateful recipients of the gift of 'Comedian,' a further demonstration of the artist's deft connection to the history of modern art," Richard Armstrong, Guggenheim's director, told the Times' Graham Bowley.

"Beyond which, it offers little stress to our storage," he added.

"Comedian" caused a huge stir when it went on display at Art Basel, which is known for drawing huge celebrities, along with patrons of the arts with deep pockets.

Cattelan's simple piece garnered international headlines — including the cover page of the New York Post — and attracted massive crowds of people clamoring to take a selfie with the world's most famous banana.

"Comedian"  received even more press after performance artist David Datuna grabbed the banana off the exhibit and ate it for a piece that he titled "Hungry Artist." At the time, The New York Times reported that Art Basel Miami simply replaced the banana after it was eaten.

As Insider's Aylin Woodward wrote in a December 2019 article, according to Art Basel Miami, Datuna's performance didn't ruin or even devalue the artwork, since buyers of the "Comedian" don't actually receive the bananas on display. Instead, they get the piece's certificate of authenticity — along with a 14-page list of instructions detailing how to correctly display the banana.

The banana received so much attention that the festival eventually took it down to try and control the crowds.

But it was still a major success. Two editions of Cattelan's piece sold for $120,000, while another buyer purchased a third edition for $150,000.

"It appealed to me for its absurdity and the effect on the public," Sarah Andelman, one of the buyers, told The Times. "I observed all the Basel visitors taking their selfie and I thought that was such a reflection of our time."

Lena Stringari, the chief conservator of the Guggenheim, told The Times that the instructions for the artwork include how often to change the banana and how high above the ground it should be installed.

"Of all the works I have to confront, this is probably one of the simplest," she added. "It's duct tape and a banana."

Stringari also noted that the instructions do not specify how big the banana should be, or where it should be purchased.

The Guggenheim, which will reopen its doors on October 3, has not yet specified when the banana will go on display.

But when it does, Stringari said she will likely just pop out to one of Manhattan's many bodegas and go buy one.