Dreamers are doing what? Fair enough. Nobody wants to say the dream is over. Certainly not in a pop song, the currency of hope. But it’s fair to say the state of the world circa 2021 has lured Neil Finn to a darker turn of mind. The future’s so bleak he needs Crowded House. Turns out so do we. 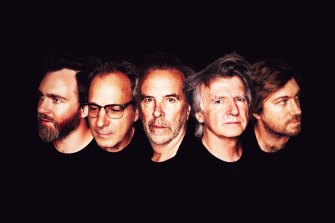 Crowded House are back with a new lineup and their first new music in over a decade.Credit:EMI

The revival of the hallowed brand for the first album in 11 years is more than a marketing stunt given the palpable return of bassist Nick Seymour and original producer Mitchell Froom on endlessly inventive keys. New boys Liam and Elroy Finn are so steeped in their dad’s harmonic sensibility that they can only amplify it: exactly the kind of moral support that plants a permanent flickering smile on a decidedly ambivalent set of lyrics.

“Hey, everybody wants to make a bad time good,” is the first line on Neil’s sighing breath. A wistful guitar pattern tries to decide which it is, as drummer Elroy counts in disconcerting fives. It would take one of those nerdy YouTubers who deconstruct Beatles songs to explain Neil’s perpetual oscillation between major and minor moods, but the line feels finer than ever here – an ongoing toss-up “whether sunlight or shadow falls on me”.

The odds are starker in the most recent single, Playing With Fire, which references quarantine madness and confesses, “I’ve been lying frozen in my bed / Feeling like the end isn’t far away.” Still, those horns sure sound like a triumph. And the weird, trippy outro is 30 seconds of headphone bliss. Are we winning yet?

Regardless of the emotional push and pull, the sneaking suspicion that the band is having a ball grows with each elaborate left-field diversion tinkling in the margins. A tuned woodblock giggles over here, an outrageous guitar line snakes away over there. Whatever You Want features the most flatulent bass solo ever recorded: a pretty funny detail in an angry song about some crazy lying king who’s “as bent as a snake”. 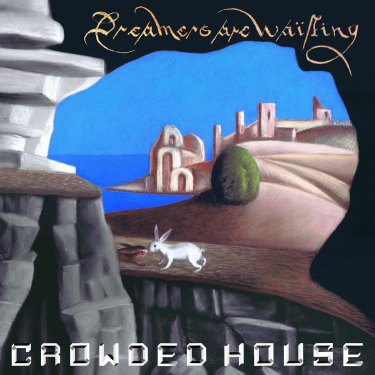 The new album, titled Dreamers are Waiting, has 12 songs – and not one of them is a dud, says reviewer Michael Dwyer. Credit:

It’s harder to find the comic streak in the spooky echo chamber of Show Me The Way: all blankets on windows, handguns under pillows, burning crosses and holy pain. The codes are harder to crack but the images no less nightmarish in Goodnight Everyone and Too Good For This World. And still, when it comes time to whistle choruses, it’s hard to feel anything but chipper.

A cryptic character analysis set to a slowly descending chime of guitars and ominous keyboard washes, Real Life Woman is the most classic Crowded House song of the lot. Who is this gifted legendary singer he’s been trading lines with every night? Is she in Fleetwood Mac? Pure speculation, of course, but that’s the fun of it. Conversely, the airborne Love Isn’t Hard at All might be the album’s most transparent and uncomplicated expression – and tellingly its least interesting.

They keep coming. Twelve songs, no duds, although some patient mental assembly may be necessary. One of this House’s trademarks is the ingenious melody knitting together a bunch of chords and a bass line that sound like they would otherwise be complete strangers. Talking to you, Sweet Tooth: one apparently set in the waiting room of Mr Chow’s takeaway. Sure, it’s not all disease, criminal minds and demagogues.

The album’s second single, To the Island, is the thematic heart of the whole head-spinning trip. In a world of chaos and confusion; – too enormous, beyond us, covered in smoke, the whole system broke, where “shit just got real” – there’s a place that’s just the right size. It might be New Zealand, of course. But this perfectly formed album feels close enough.

For all its insistent, whispering panic, Dreamers Are Waiting is a work of such intricate, almost cartoonish musicality that it feels blissfully nostalgic by nature in a world which, by and large, just doesn’t make records like this anymore. For Crowded House fans, that’s comfort enough. Like a true friend, Neil won’t tell us everything’s rosy, but he will remind us to keep the faith: “When my legs and my arms let go/ That’s when my hands and my heart say no.”

In need of some good news? The Greater Good newsletter delivers stories to your inbox to brighten your outlook. Sign up here.