It’s blisteringly hot on the day I meet Genevieve O’Reilly on the set of The Dry, the Australian rural thriller adapted from Jane Harper’s bestselling novel, in which she stars with Eric Bana. It has barely rained in this part of western Victoria for five months, and the ground is dusty, the grass yellow and brittle. She, though, is radiant.

As we huddle on a pew in the back of a wooden church, the waft of the fan on each oscillating sweep coming as a benediction, I can’t help thinking that with her alabaster skin, fine cheekbones and Irish lilt, the 43-year-old London-based actor is like an exotic flower that’s just been blown into Minyip by the harsh northerly wind. 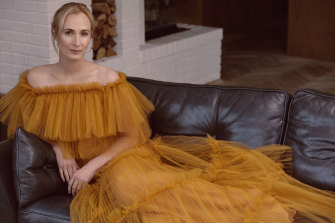 Genevieve O’Reilly: “I’m from Ireland, and from Australia, and from neither.”Credit:Louise Samuelsen/louisesamuelsen.com

The second the camera rolls, though, Genevieve slides into a pitch-perfect Australian accent. Instantly, utterly, she is at home – just like her character Gretchen, a woman who grew up in the fictional town of Kiewarra and never left.

“It’s so complicated – well, it’s not complicated, actually,” she says by way of explaining her ability to switch into faultless Strine. “I’m from Ireland, and from Australia, and from neither.”

Genevieve was 10 and the oldest of three children when her father, who worked in computing, and her mother, a homemaker, decided to emigrate from Dublin to Adelaide. “They’re full of spirit, really brilliant grab-life-by-the-collar people,” she says of her parents, who still live in the South Australian capital.

As an adult, and with a seven-year-old son and a 10-year-old daughter of her own, she says, “I now realise that’s a massive thing to do. Moving, jumping, was really brave.”

It wasn’t entirely a leap into the unknown, though: her father’s sister had moved there a few years earlier, and eventually most of the clan would trade the Liffey for the Torrens, her grandparents included. “We had this little posse,” she says. “It provided a real family support net for us as children, and for my parents as well.”

Do you consider yourself Irish these days or Australian? “I’m both, and I’m neither,” she says, after giving it some thought. “And it breaks my heart to say that but it’s the truth. I’m a proper mongrel.”

Not quite fitting anywhere doesn’t make for the easiest passage through childhood, perhaps, but for a budding actor it has its benefits.

“It’s the idea of being outside, of being on the periphery, of watching and learning and understanding how I need to shift and change to get inside that circle. I guess it’s understanding the intricacies of assimilation, and that it’s not just as simple as an accent.”

Genevieve was 14 or 15 when she first felt the tug of the stage. The State Theatre Company of South Australia had a cut-price deal for school kids, $5 to see a play. “Simon Phillips was artistic director then, and I went with my buddies, and we saw some amazing productions – I saw Hugo Weaving in Julius Caesar – and that inspired me to give the profession a go.”

It took her three attempts, but eventually she was accepted by NIDA – “I think they just got sick of seeing my face” – and that meant relocating to Sydney alone. It was a big move for someone barely out of her teens, but having already done the Aussie backpacker thing through Europe, she was up for the challenge.

She loved the school, the deep training and the rolling productions, but she remembers being told that none of them would ever get this many jobs back to back again. “And they were right.”

She remembers most the day a 74-year-old Ruth Cracknell arrived to share her wisdom with the students who sat (literally) at her feet.

“She came in with this big smile on her face and said, ‘Looking at you all, I’m so jealous. I wish I could do it again.’ I’ve never forgotten that. She spoke to us about travelling to London, working in the theatre, on television, on film, this celebrated woman – this old woman – still working and still talking about her love of the profession. And I said to myself that day, ‘That’s who I want to be.’ ”
Twenty years on, Genevieve is well on her way. Like her inspiration, she has worked on stage, film and TV.

She even followed in her footsteps to London. “Maybe it impacted me even more than I realised,” she says wryly.

Genevieve emerged from NIDA’s 2000 graduating class with a glowing reputation and found work on stage with the Sydney Theatre Company and Belvoir, and on TV with All Saints – “I loved that job; it felt like an extended theatre company” – and in small roles in big films: The Matrix Reloaded and The Matrix Revolutions. Oh, and a little thing called Star Wars.

As emerging Rebel Alliance figure Mon Mothma in Revenge of the Sith, which was filmed in Sydney, she delivered some of George Lucas’s more classically wooden dialogue. But the role turned out to be the gift that keeps on giving. 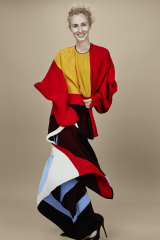 “We’ll just have to wait and see what happens, how the world shifts and changes, and what this does,” says Genevieve, “because we don’t have any answers right now.” Credit:Rachell Smith/ Camera Press/ Australscope.

She reprised the role (in voiceover only) for the animated series Star Wars: Go Rogue and Star Wars: Rebels, and appeared on-screen in the spin-off film Rogue One. In the works now is another live-action series for Disney+, in which Mon Mothma is reportedly a major character.

“It’s an amazing thing to be part of,” Genevieve says of the ever-expanding Star Wars universe. “It’s really nice to do a play in London and come out of the stage door and a nine-year-old has come to meet me afterwards. Really, they’re there because of Star Wars – but they’ve come to the theatre!”
With those big screen credits to her name, Genevieve might have been expected to follow the well-worn path to Hollywood. She did try, she says, “but within a couple of days of arriving I knew I didn’t have what it took to hack it there”.

She was desperate to head home but at the urging of her agent, and after visiting family in Ireland, she popped into London for some meetings – and this time a move did make sense.

In 2005, she and husband Luke Mulvihill, a chiropractor, decided to bite the bullet. “We thought we’d do the Australian thing and go for two years and come home,” she says. “And 15 years later we’re still here.”

Professionally, it has been a success. Genevieve was part of the Olivier Award-winning production of The Ferryman, directed by Sam Mendes, both in London’s West End and on Broadway. (The Dry’s director, Robert Connolly, and his casting agent wife, Jane Norris, saw her in London and thought she’d be perfect as Gretchen; they urged producer Bruna Papandrea to go see her in the New York production, and she agreed.)

Making The Dry in a part of Australia she’d never visited before was “an extraordinary experience”, she says, and meeting the “hard-working, grafting, spirited people” who call it home helped shape her performance.

“We’ve always thought that although Australia is far away geographically, we’re only a plane flight away. All of a sudden it feels further.”

“What I love about Gretchen is that she’s a strong woman who, faced with all the hardships of that farming life, decided to stay, not to walk away, to invest in her community – and she wasn’t burdened by the experience of staying. That was her life and she was proud to live it.”

Her own life is the opposite: almost the definition of the modern globe-trotting thespian. But then along came COVID-19, and suddenly such a career seems enormously problematic.

Were it just about work, that would be challenging enough. But for Genevieve, whose identity is stretched across the planet, it’s something else.

“We’ve always thought that although Australia is far away geographically, we’re only a plane flight away. All of a sudden it feels further.”

Had things been different, they’d be spending this summer in Australia with their families. Instead, Christmas will only reinforce the distance between them. “We’ll just have to wait and see what happens, how the world shifts and changes, and what this does,” says Genevieve, “because we don’t have any answers right now.”

The Dry opens in cinemas January 1.

This article appears in Sunday Life magazine within the Sun-Herald and the Sunday Age on sale December 13. To read more from Sunday Life, visit The Sydney Morning Herald and The Age.