Surging demand for labour has deepened the shortage of skilled workers across 286 occupations ranging from chemical engineers to abattoir workers, in a new finding that will intensify calls for more investment in skills policy when federal and state ministers meet on Friday.

The list of skills shortages has increased to 31 per cent of occupations assessed by federal authorities to guide employment policy, up from 19 per cent of job types one year ago. 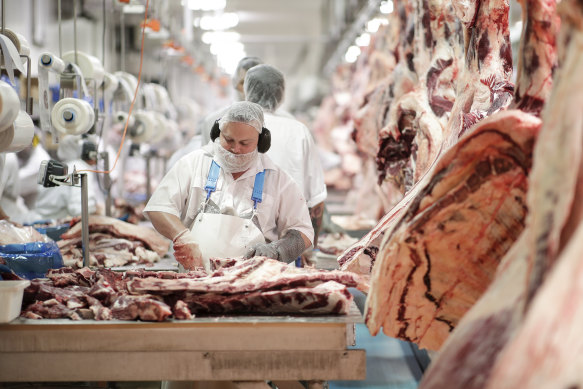 Meat boners are among the occupations now in shortage.Credit:Alex Ellinghausen

With employers advertising 301,000 job vacancies in August, up by 37 per cent on the same month last year, the labour shortage is turning into a pressure point in the October 25 budget when the federal government is trying to negotiate a funding deal with the states.

“The staggering jump in occupations listed reinforces the urgent need to tackle skills shortages,” said Skills Minister Brendan O’Connor ahead of the release of the new figures from the National Skills Commission.

O’Connor will meet his state counterparts in Melbourne on Friday to discuss a potential $3.7 billion funding agreement over five years, which the previous government could not finalise because of disagreements over how the states were expected to spend the money.

The federal government expects to make progress on the five-year deal, but a final outcome is not expected. More progress is likely on the $1.1 billion agreement unveiled at the Jobs and Skills Summit last month to fund an extra 180,000 fee-free TAFE places.

The annual skills priority list, to be released on Thursday, shows the number of occupations in shortage rose from 153 to 286 over the past year.

“The past year has shown a significant tightening in the Australian labour market, and the findings of the 2022 [list] reflect this, with a large proportion of diverse occupations in shortage,” the Skills Commission report says.

“The ongoing effects of COVID-19, along with the changing economic landscape, have influenced a range of challenges in many occupations.”

The report notes the number of jobs advertised in Australia reached 301,100 in August, up 37.7 per cent increase from the same month the previous year.

The Skills Commission says an occupation is considered to be in shortage when employers are unable to fill or have considerable difficulty filling vacancies for an occupation or cannot meet significant specialised skill needs within that occupation, at current levels of remuneration and conditions of employment, and in reasonably accessible locations.

“Based on this definition, the primary measure of an occupational shortage is the ability of employers to fill vacancies,” it says.