The REAL Dame Deborah James: Podcast team pay irreverent tribute to a ‘deviant with unwashed hair’ who missed the train to Rachael Bland’s funeral as they reminisce over their ‘dear friend’

To the world, Dame Deborah James was a glamorous and articulate campaigner, mother and TV personality who achieved so much in the final weeks of her life.

But to those closest to her she was a ‘chaotic deviant’ with ‘unwashed hair’ who had a penchant for being late, dreamed of working in fashion and used a ‘Radio 4 voice’ when speaking in public, her co-presenters and producers lovingly recalled in an irreverent tribute.

Cancer activist Lauren Mahon, Steve Bland, the widower of co-presenter Rachael Bland, and producers Mike Holt and Al Entwistle shared their touching and hilarious memories of their late friend in a special edition of the BBC podcast You, Me and the Big C.

‘The world is mourning this well put-together, fabulous dame who raised millions of pounds. We’re all so incredibly proud of that,’ co-host and close friend Lauren Mahon said.

‘But we miss our deviant. We miss Deborah James who turned up to podcasts with her hair unwashed; who swore like a sailor and had the biggest cackle ever; who was someone who worked in “computer science” and couldn’t work an iPad. That’s what we miss.’ 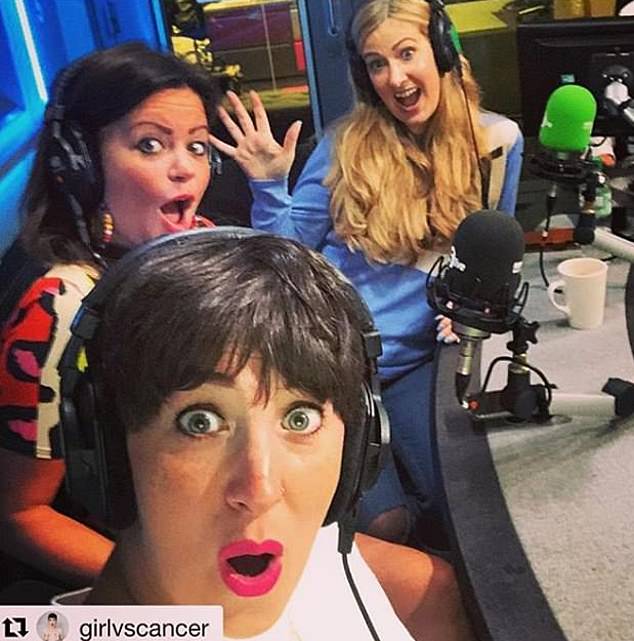 Cancer activist Lauren Mahon, Steve Bland, the widower of co-presenter Rachael Bland, and producers Mike Holt and Al Entwistle shared their touching and hilarious memories of their late friend in a special edition of the BBC podcast You, Me and the Big C. Pictured, Lauren (pictured front) with Dame Deborah (centre) and Rachael Bland (behind) while recording 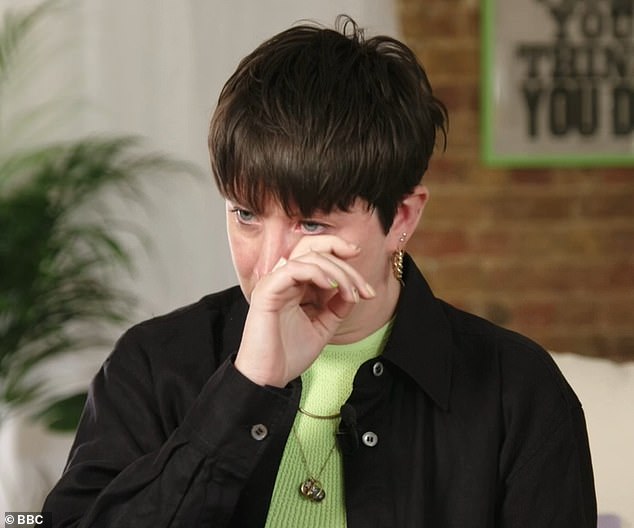 Cancer activist Lauren Mahon, 37, who presented BBC’s You, Me and the Big C with Dame Deborah and their late friend Rachael Bland, broke down on a BBC tribute to Deborah 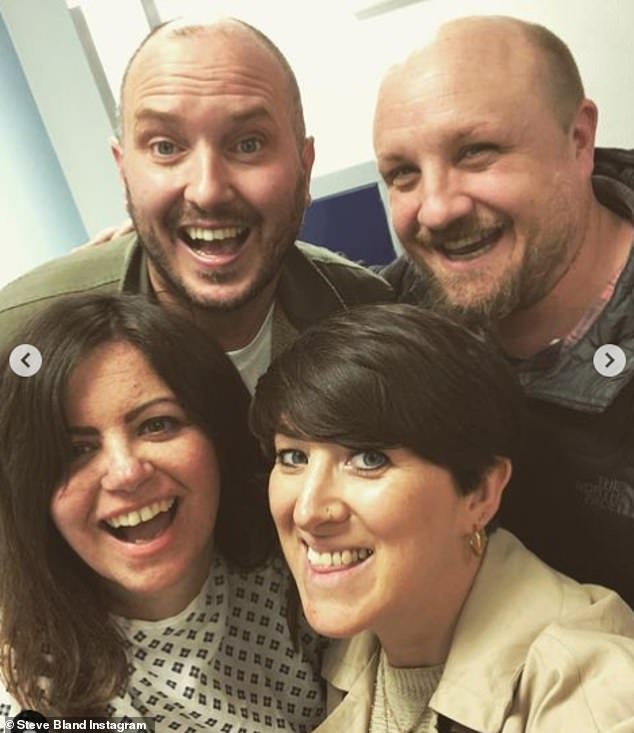 She added: ‘Me and her were so crude. There are so many stories I can’t say on air. I’m really going to miss my little cheeky mate.’

Dame Deborah, who lost her battle with bowel cancer last month, and cancer activist Lauren co-presented You, Me and the Big C with breast cancer campaigner Rachael Bland from March 2018 until her death later that year.

Rachael used the podcast as a platform to announce she had just days to live, prompting a surge in interest in the programme.

By the end of her life she was a regular face on ITV’s Lorraine and successfully campaigned to have bowel cancer symptoms added to toilet roll packaging.

Her Bowelbabe fund now stands at over £7.3million and her extraordinary fundraising efforts – which included releasing a book and a line of charity t-shirts – led to Deborah being awarded a damehood by Prince William in her parents’ back garden.

But for her podcast team, Dame Deborah was far more than the extraordinary public face the world saw. 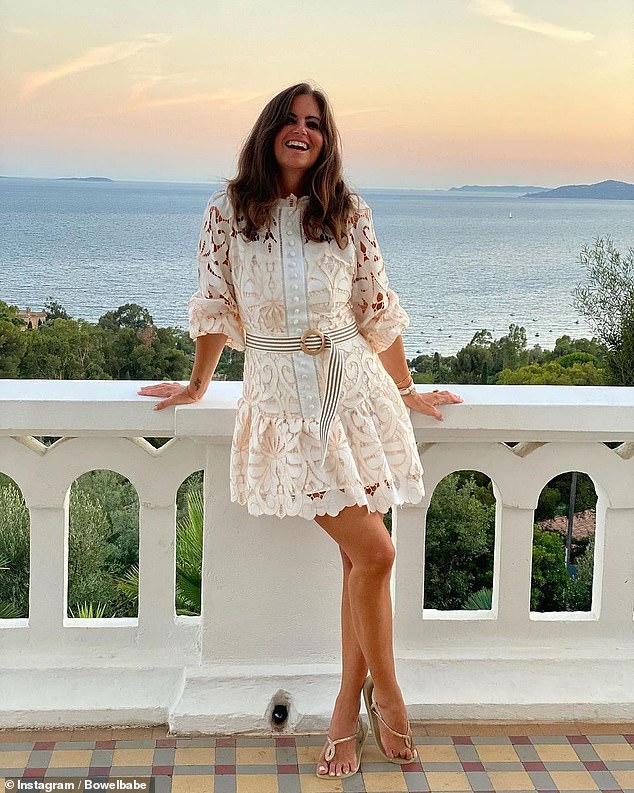 Dame Deborah, pictured, who lost her battle with bowel cancer last month, and cancer activist Lauren co-presented You, Me and the Big C with breast cancer campaigner Rachael Bland from March 2018 until her death later that year 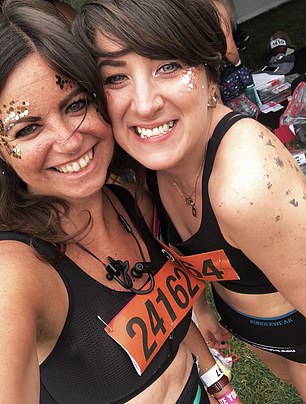 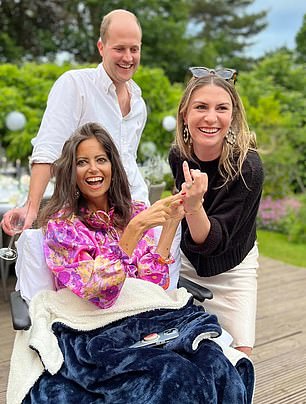 Deborah (pictured, far left, with Lauren Mahon and, right, with her brother and his fiancée) was made a dame by the Duke of Cambridge at her family home, with William praising her for ‘going above and beyond to make a very special memory’ 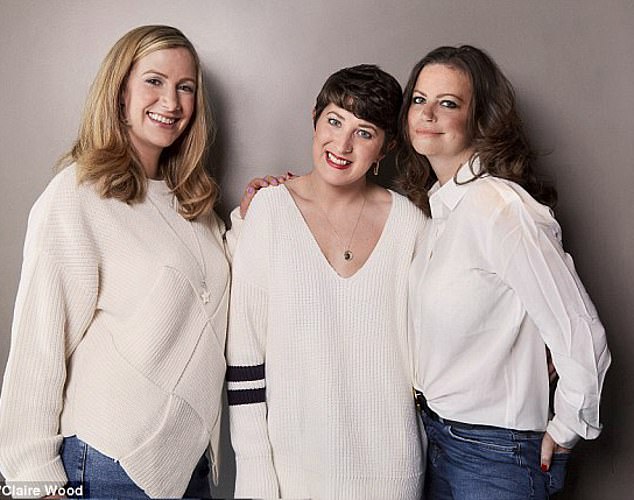 After sharing her experiences on living with the illness on social media, Deborah became known as the ‘Bowel Babe’ and in 2018, she joined Lauren Mahon and Rachael Bland to present the award-winning podcast You, Me and the Big C on Radio 5 Live

The group shared an anecdote about how Deborah missed the train to Rachel’s funeral, despite tearing down the platform in a black hat and sunglasses as Lauren begged the guard to hold the doors.

After catching a later train, Deborah had no time to change before the service so had to improvise.

‘We were next to a line of taxis at the taxi rank and Deborah, with [the three of us] standing around her, whipped her frock off, took her other frock out, just stood there in her bra and knickers, pulled her other frock on, and said “right, I’m ready now”. And those taxi drivers were just looking at her.’

They laughed as they recalled technical mishaps while filming the podcasts, Deborah’s ‘stream of consciousness’ text messages and ‘a lot of Prosecco and dancing’. 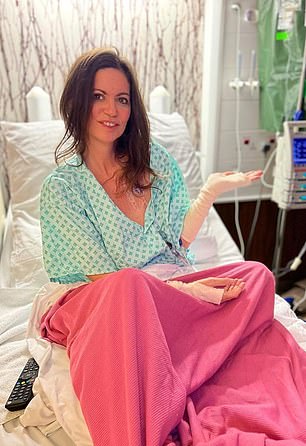 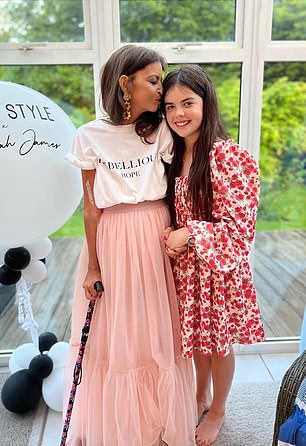 On May 9, the mother-of-two shared a heartbreaking ‘goodbye’ message to her 470,000 Instagram followers, revealing she was being moved into hospice-at-home care, while ‘surrounded by family’, because ‘my body simply isn’t playing ball’

Steve explained how he first got to know Deborah after his wife’s death when she phoned to ask how she could help.

‘I was getting a lot of gushy messages saying “I’m sorry, how are you, say hi to Rachael”, but Debs was just like, “Right. What can I do? How can I help?”

‘It was super practical. She didn’t do soppy and I loved that. I didn’t need people to tell me how sad it was around then.’

Lauren said she liked the idea of Rachael and Deborah being together in heaven.

‘I could just imagine Rach greeting her with some really, really posh Champagne, maybe a Bollinger then showing off her Jimmy Choo cloud shoes that she’s got up there, then turning to Deborah and saying, “you took your time, didn’t you?”‘

Steve agreed: ‘I can just imagine Rach saying, “I can’t believe you got made a Dame and I didn’t.’

The team remembered how she went from a complete radio novice to a broadcasting pro with a serious ‘radio 4 voice’ that she put on.

‘I know she was a teacher before and she had to address people and be articulate, but she just had this way of delivering information live that I was so impressed by,’ Lauren said. 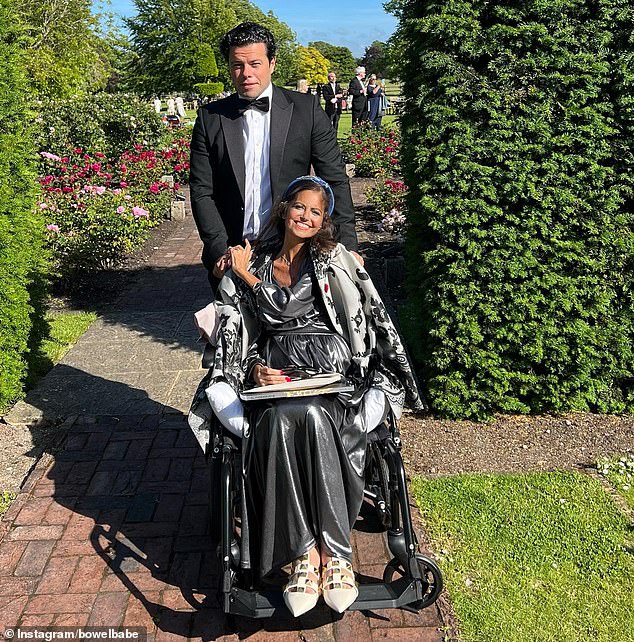 Steve spoke briefly on how her family was coping in the days after her death, saying her widower Sebastien (pictured) was worried about balancing his grief with raising his children

‘We’d be on the train on the way up, talking rubbish, then we’d be in the studio and she went into broadcast mode. That’s something I feel so privileged to have been part of. It was always in her but she just honed it.’

They also reflected on the small silver linings of her cancer diagnosis, including having more time with her children because she was forced to give up work as a teacher.

‘She said that before she had cancer she didn’t think she was a very good mum,’ one recalled. ‘She was very career orientated, was always very busy, had a million things to do.

‘It’s sad that it takes something like this to make you realise those cliches about life being so precious are true but it did with her. She said after her diagnosis she became a better mum. You could see what an amazing mum she was.’

Steve spoke briefly on how her family was coping in the days after her death, saying: ‘[Her husband Sebastien] was worried about how to balance grieving and mourning and all the things you’ve got to do while looking after the kids.

The team added that while she had a ‘fizzing’ and ‘vibrant’ personality, she was also a sensitive woman driven by changing the world and helping others.

Lauren added: ‘As much as she was out there and balshy, she was also sensitive. Knowing that she’d helped somebody would light a fire in her and kept her going.’