Two decades ago Sue Giles, artistic director of Polyglot Theatre, was watching her kids playing with a cardboard box in the backyard.

“I thought, wouldn’t it be amazing if we had thousands of them,” she says. “And that was the beginning.” 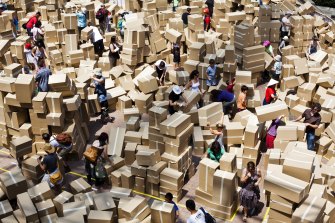 They first took We Built This City, an interactive cardboard construction site, to Melbourne’s City Square in 2001 (“We just opened the gates and wondered how it would go, and it rained and the wind blew things down and everyone just stayed, and played and played”), then to Kennedy Centre in Washington, to the National Theatre in London, to Japan, Korea, Brazil and China.

In that time, children have built cityscapes beyond anything Giles imagined – and the journey gave her a unique insight into what makes us the same and what makes us different, as she saw the world’s metropolises through young eyes.

Now, for its 20th anniversary, the work is coming home this weekend. And Giles wonders again what this simple, profound show will reveal, after two years in which children have been under guard against the pandemic in their many dispersed boxes.

Simon Abrahams, now Fringe Festival director, joined Polyglot as co-CEO after the show was created. “I totally fell in love with it,” he says. He and Giles decided to take it to the world. 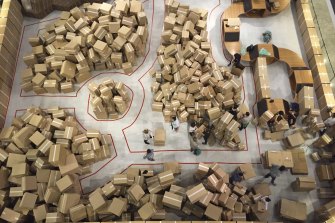 We Built This City in Brazil in 2016.Credit:Rainbow Sweeny courtesy Polyglot Theatre

First stop was the Kennedy Centre in Washington DC, where 3000 people came in a single day to play with 10,000 boxes. At midnight they were still piling up leftover boxes, the CEO of the centre even pitching in to help.

“That was one where we really saw the shape of the city taking shape in the work,” says Giles. “We had this whole section of the work where people were building big monuments and taking people on guided tours. 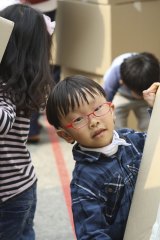 We Built This City in Seoul in 2012.Credit:Emma Dodd, courtesy Polyglot Theatre

“And the other half of the city was a kind of shanty town, all underground, children had built these [shopping] malls underneath where you crawled through. I was taken through a labyrinth of boxes with the kids… we had basically built Washington DC.”

But the similarities between what emerges are always bigger than the differences, Giles says. As Minecraft and Fortnite show, the urge to build is deep in us. “Children’s sense of invention and imagination doesn’t differ, country to country, even if the opportunity to be free in that way is a very different experience culturally across the world.”

In China a squad of police assigned to the performance kept taking boxes, pulling children out to check their registration, “setting too many boundaries”. Eventually they warmed up and became allies, says Giles, but “the feedback from families afterwards was ‘we would have liked more freedom’.”

In Japan, touring after the big earthquake and tsunami, they had to negotiate presenting a show that ends with catastrophic cardboard destruction.

Giles and Abrahams are interested to see a post-pandemic show. “I feel they’ll either focus on the home and the domestic and the experience they’ve had over the last two years, or we might see the opposite: monsters and sculptures and mountain ranges and the things they’ve wanted to see but not been able to,” says Abrahams. 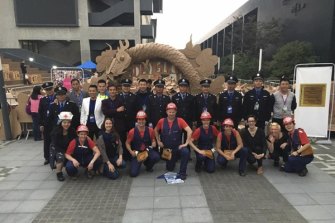 We Built This City with cast and security detail in China in 2017.Credit:Viv Rosman courtesy Polyglot Theatre

The work is inherently risky, Giles says: there are few rules apart from “keep the roads clear” and Polyglot’s facilitators mostly follow the lead of the children.

“We had a bunch of Goths in Perth: they wanted to smash everything but we said ‘come and build’ and they just rebuilt the inside of a flat and stayed there all day. And you never know whether the wind’s going to blow everything over. At the National Theatre they all blew into the Thames, at the Sydney Opera House they went in the Harbour.

“Chaos does reign, but it’s incredibly dramatic and built on story and narrative. You can follow a child’s journey. I’ve sat and had cardboard cups of tea with a small child who built a pagoda. Some other kids opened up a secret door and said ‘sshh, we’re hiding a refugee’.”

Giles also enjoys the tension between adults, who really want to build and be in control, and their children “who have this subversive layer where they disappear”.

Abrahams wanted to bring We Built This City back for this year’s Fringe – this weekend’s show is a rescue from that lockdown-cancelled festival.

“It is what it sounds like, a pile of cardboard boxes, it’s not more complicated than that,” Abrahams says. “But it is the most extraordinary experience.”

We Built This City is at University Square Carlton on Saturday and Sunday. Tickets at melbournefringe.com.au.