Home » Lifestyle » The Woman Who Got 'Bachelor' Peter's First Impression Rose Is So Similar To Hannah B.

Every season of The Bachelor, there’s at least one contestant who gets some early buzz. And every season, there’s always the fair share of Hannahs and Laurens in the mix. So it’s hardly a shocker that one Hannah in particular is getting attention—not just from Pilot Peter Weber, but pretty much all of Bachelor Nation—Hannah Ann Sluss.

Hannah Ann was specifically mentioned by host Chris Harrison during a live Facebook event announcing all the contestants, so you can bet she’s gonna play a pretty important role this season. And she shares at least striking similarity to Peter’s famous ex and former Bachelorette Hannah Brown (besides, of course, her name).

Here’s everything you need to know about the woman vying for Peter Weber’s heart:

She’s actually close friends with another Hannah: Bachelor in Paradise’s Hannah Godwin, a.k.a. Hannah G. And, according to Chris, Hannah G. recommended Hannah Ann for the show. Because, ya know, Hannahs gotta stick together like that.

Expect her to stir up a little (or a lot) of drama. 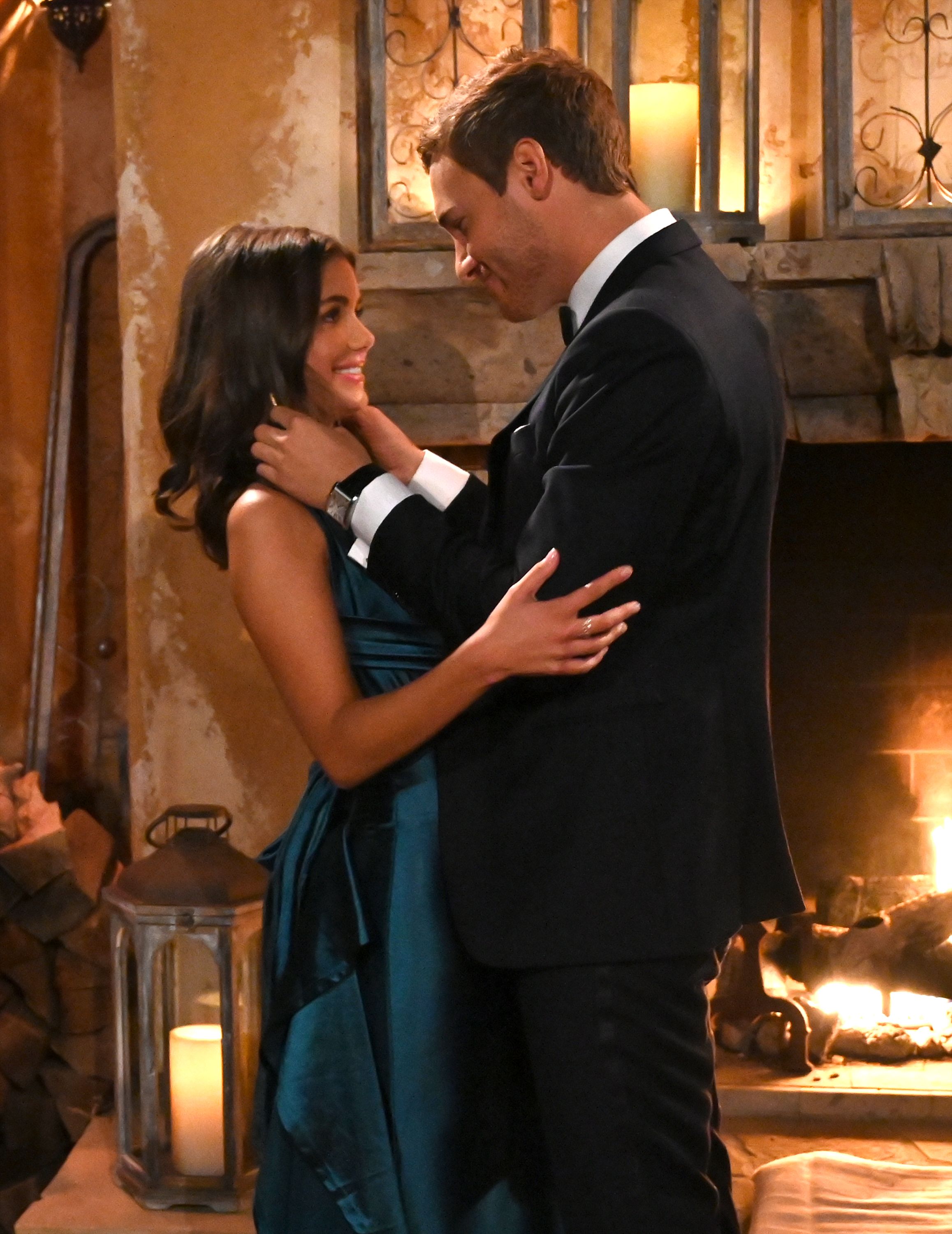 Despite being buddies with Hannah G., Chris said Hannah Ann didn’t seem to know what she was getting herself into. “She seemed very naive about this whole Bachelor world,” he said. Buuuttt, she apparently caught on pretty fast. “For someone who is so naive and innocent, she ended up in the middle of absolutely everything,” Chris said.

Yeah, The Bachelor has plenty of “models” in the mix, but Hannah Ann is actually signed with Wilhelmina Models, according to her Facebook (which she has since made private). And her photos are all over the place. She’s on the front of Ultra Downey Odor Protect and is the face of Sonic. Get it, girl!

She was in country singer Chris Lane’s music video.

Well, here’s yet another Bachelor connection: Country singer Chris Lane just married Lauren Bushnell, a.k.a. Lauren B., who won Ben Higgins’ season of the Bachelor. Clearly, things didn’t work out between the former Bachelor couple, but Hannah ended up starring in Lauren’s now-hubby’s video for his hit single, “I Don’t Know About You.”

Hannah Ann does a little acting in the video (her name is “Georgia,” and she inspires some serious lust on Chris’ end—fake lust, of course).

She mentioned God in a recent Instagram Story post that said, “Trusting God is the number one stress reliever in your life.” 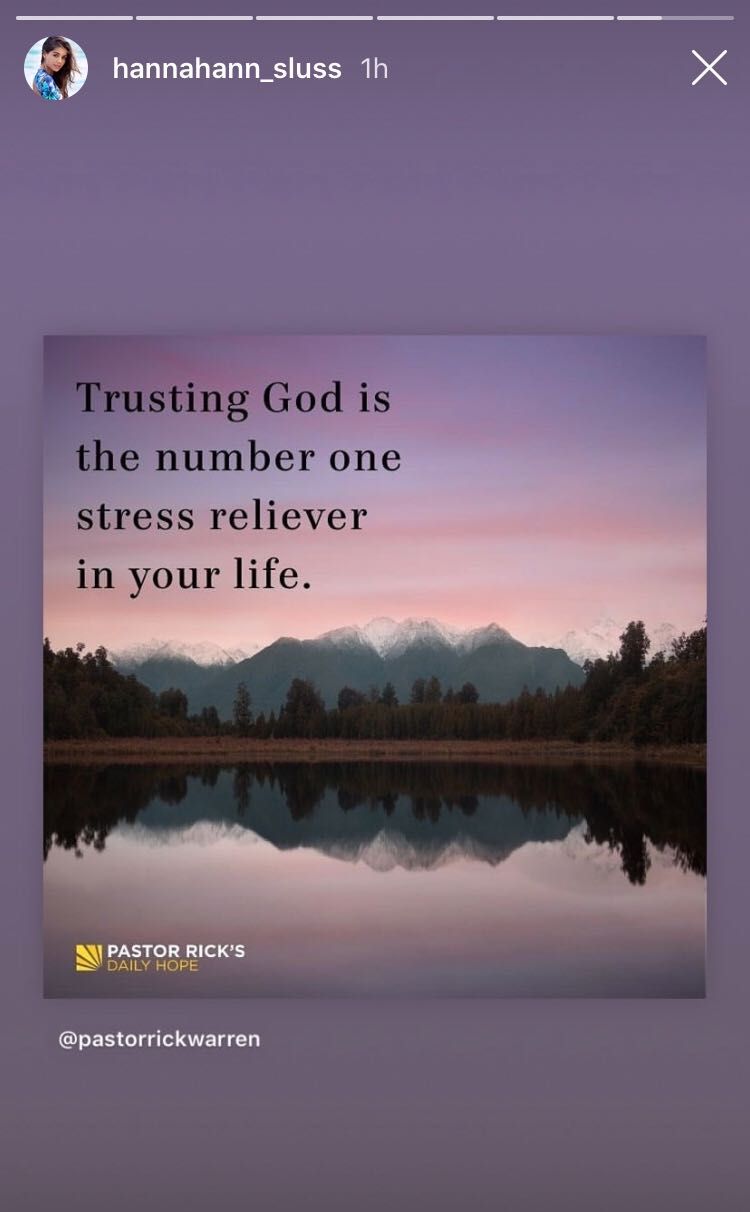 Hannah Ann also has a cross emoji followed by “1 corinthians 2:9” in her Instagram bio. (FYI: That verse says, “However, as it is written: ‘What no eye has seen, what no ear has heard, and what no human mind has conceived’—
the things God has prepared for those who love him,” according to BibleGateway.)

She’s into the University of Alabama.

Though a native of The Knoxville, TN, Hannah Ann is pictured in at least one Facebook post and a coinciding Instagram wearing an Alabama Crimson Tide shirt. (This + her faith + her name = major Hannah B. vibes, amirite?) So, if you thought you were finally done hearing “roll tide” on repeat from Bachelor Nation, you’re likely mistaken.

Hannah Ann is reeeaaaallllyyyy into dogs.

Her Instagram is covered with pics of herself with various dogs. (Who all these dogs actually belong to… I don’t know.) There’s this one:

Hannah Ann receives Peter’s First Impression Rose after becoming the “Can I steal you for a sec?” girl at the first cocktail party (well, it worked…). And, as of now, Bachelor spoilers king Reality Steve has revealed that Hannah makes it all the way to the final two. But no woman who has ever received a First Impression Rose has actually won the Bachelor, so there’s that.

It’s tough to keep track of everything going on with the Duggars these days. While Jim Bob and Michelle Duggar

'Troop Zero' Review: It's the Snobs Versus the Slobs, Girl Scout-Style

What Is Jerry Harris Doing After ‘Cheer’? Fans Can’t Get Enough Of Him

It’s tough to keep track of everything going on with the Duggars these days. While Jim Bob and Michelle Duggar

'Troop Zero' Review: It's the Snobs Versus the Slobs, Girl Scout-Style

What Is Jerry Harris Doing After ‘Cheer’? Fans Can’t Get Enough Of Him