Unlike Disney, which has taken to roaming the world’s cultures in search of inspiration for its animated features, Dreamworks has always looked to Hollywood. 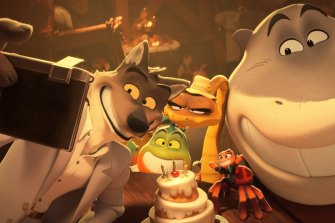 The Bad Guys: Tarantino for kids.

While it’s made forays abroad with its Kung Fu Panda franchise and a short-lived collaboration with Britain’s Aardman Animations, its basic comic style still springs from puns and parodies rooted in American movies and television.

The Bad Guys is the latest example. A wolf, a shark, a snake and a piranha make up its quartet of anti-heroes, yet they behave as if auditioning for Quentin Tarantino.

The only surprise lies in the fact that they were created by an Australian – Melbourne-based children’s author Aaron Blabey. The series of books on which the film is based has graced The New York Times bestseller list with 30 million copies sold worldwide.

Directed by Dreamworks animator Pierre Perifel, who has re-tooled Blabey’s original illustrations by giving their characters sharper contours and more colourful wardrobes, the film begins with a diner scene which owes a lot to Tarantino’s Pulp Fiction.

It then rolls on to a bank heist with car chase before getting down to the main game. When the gang are eventually arrested, the wily state governor, Diane Foxington (voiced by Zazie Beetz) gives them a chance to redeem themselves. If they can go straight and stay that way, they win their freedom. To the dismay of his partners-in-crime, the suave Mr. Wolf (Sam Rockwell) takes up the challenge. Is he serious? There are multiple plot twists before that question is finally decided.

In the meantime, the gang are consigned to the care of a mentor, Professor Marmalade, an opinionated guinea pig voiced by British comic Richard Ayoade.

It’s high-energy animation with few pauses between the action sequences. The fun is in the cleverness of the characterisations. The sardonic Mr Snake is an adroit safe-cracker. Rockwell, who has a long history of playing wise guys, has no difficulty in giving voice to Mr. Wolf’s swagger, and Awkwafina makes lively work of Mrs Tarantula, the gang’s computer hacker.

The storyline is less successful – so convoluted that the gang itself is often bamboozled by it. But logic is not really the point here. Perifel are not interested in the kind of subtleties of thought and feeling that Pixar embraces. The tone is pure Dreamworks. It’s fast, free-wheeling and very loud.