Uber will give its drivers in the United Kingdom the minimum wage, pensions and holiday pay following a recent court decision, a move being held out by Labor and the transport union as evidence the Morrison government could mandate the same thing in Australia, cost-free to users.

The ride-hailing giant made the announcement on Tuesday after it lost an appeal last month at the UK Supreme Court following a years-long court battle and holds wider implications for the gig economy globally because Uber has previously insisted its drivers are independent contractors. 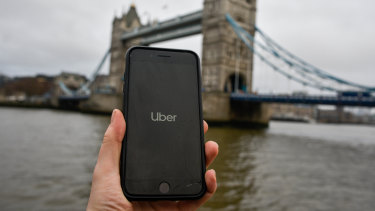 Uber has agreed to give its UK drivers the minimum wage once they have accepted a trip.Credit:Getty

But the court ruled a subset of Uber drivers were “workers”, a status that does not exist in Australia but is similar to casual employees who are entitled to the minimum wage but scant job security.

Uber said it was extending the benefits almost immediately to its more than 70,000 drivers in the UK and told the BBC it did not expect customers would pay higher fares as a result.

Drivers will earn at least the minimum wage, which currently stands at £8.72 ($15.66), when they have accepted a trip and expenses, and will still be able to earn more.

Drivers will also get holiday pay equal to about 12 per cent of their earnings, paid every two weeks. And they will be enrolled in a pension plan that both they and the company will pay into.

“Australia doesn’t need to wait for the courts here to find the same thing,” said Labor’s industrial relations spokesman Tony Burke, who has called for a tribunal to give similar rights to gig economy workers here. “The government could act right now to stop the exploitation of gig workers.”

Australia’s minimum wage is much higher at $19.84 an hour and many jobs have minimum shift times, which could pose challenges to applying the ruling in Australia.

“This is an important day for drivers in the UK,” Uber’s regional general manager for Northern and Eastern Europe, Jamie Heywood, said in a filing to the US Securities and Exchanges Commission. He noted that drivers will still be able to work on a flexible basis.

“Uber is just one part of a larger private-hire industry, so we hope that all other operators will join us in improving the quality of work for these important workers who are an essential part of our everyday lives.”

The drivers who filed the case welcomed the news but said it was not enough.

Uber has “arrived to the table with this offer a day late and a dollar short,” said James Farrar and Yaseen Aslam of the App Drivers and Couriers Union.

They said the changes stopped short of the Supreme Court’s ruling that pay should be calculated from when drivers log on to the app until they log off. They also said the company can’t decide by itself the expense base for calculating the minimum wage, which should be based on a collective agreement.

Australia’s Transport Workers Union national secretary Michael Kaine said those concerns meant it was up to government’s to regulate.

“Instead of allowing Uber to introduce static definitions on how they treat their workers, and choosing what bits of rights they will recognise, Australia must put in place a tribunal with full powers to regulate on gig workers’ rights,” Mr Kaine said.

Prior to going on leave, Attorney-General Christian Porter had said ALP plans to give independent contractors annual leave, in a similar manner to the UK court ruling, would be massively expensive and called for a more considered approach.

“We need to understand what the costs would be to business, to the contractors, to the consumer, whether or not businesses would survive any increase in wages. But again, these are things that can be considered soberly and sensibly step by step with proper modelling.”