The reopening of key parts of the Victorian economy has lifted national consumer confidence to its highest level since before the coronavirus pandemic and prompted hopes of a strong Christmas selling season for beleaguered retailers.

Spending data collated by the Commonwealth Bank plus two separate measures of business and consumer sentiment all point to a welcome lift in confidence, with Victorian hairdressers and household good purveyors some of the biggest winners. 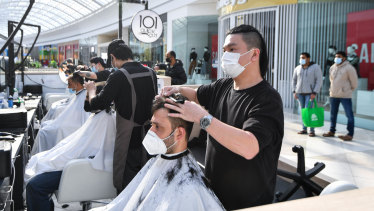 The reopening of Victoria has taken consumer confidence to its highest level since the start of the pandemic, led by people rushing out to get a haircut.Credit:Joe Armao

According to the CBA, which tracked spending through its network of credit and debit cards, spending in Victoria was up 16 percentage points between late October and the first week of November.

Spending across Victoria is now 15 per cent up on the same time last year, stronger than NSW (13 per cent) and in line with Queensland.

In Victoria, spending on personal care services, such as hairdressers, jumped after the end of lockdown restrictions. In late October, spending in this sector was 50 per cent down on a year ago. Last week, it was more than 30 per cent above.

The re-opening of Victoria appears to have boosted broader shopper sentiment, with the ANZ-Roy Morgan weekly consumer confidence up by 3.2 per cent to reach its highest level since the first week of March.

It was driven by growing confidence about the economy's performance over the next 12 months and the next 5 years. Current financial conditions also increased although they still remain negative and well short of their pre-virus levels.

ANZ head of Australian economics David Plank said confidence was above its neutral level for the first time since the pandemic started in what could be a positive development for the nation's retailers over the next few weeks. 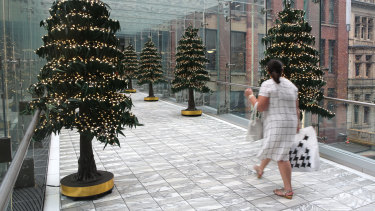 "There is a sharp improvement in 'time to buy a major household item', which could signal a buoyant Christmas shopping period," he said.

"Lower interest rates and the RBA's commitment to support employment could have been triggers for the gain."

It is not just consumers becoming more upbeat. The closely-watched NAB business survey, released on Tuesday, showed confidence among the business sector at its highest level since the middle of last year.

NAB chief economist Alan Oster said the confidence boost was driven by the events in Victoria, with large increases in recreational and personal services which have suffered the most during the coronavirus lockdown.

"Nonetheless, the survey continues to show that the economy has rebounded from the sharp fall in activity in first half of 2020 and will likely continue to recover as the economy reopens," he said.

The most important news, analysis and insights delivered to your inbox at the start and end of each day. Sign up to The Sydney Morning Herald’s newsletter here and The Age’s newsletter here.

Jennifer Lawrence is one of the world’s top actors, with dozens of movies attached to her name. She is lauded

I'm A Celebrity's Jordan North has a CRUSH on co-star Bev Callard and Googled her in lycra, claims pal

Jennifer Lawrence is one of the world’s top actors, with dozens of movies attached to her name. She is lauded

I'm A Celebrity's Jordan North has a CRUSH on co-star Bev Callard and Googled her in lycra, claims pal