Home » Lifestyle » What should you give a declutterer this Christmas?

Christmas is universally acknowledged to be the most wonderful time of year, unless, that is, you're a devotee of world-renowned decluttering guru Marie Kondo (otherwise known as a "Konvert").

That's because the Yuletide season, with its spectre of material and comestible excess haunting us well into January, threatens to undo all the life-changing magic promised by Kondo's method. 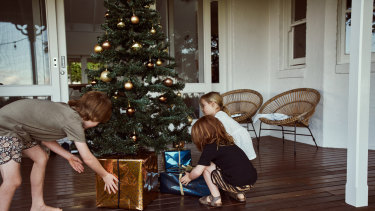 Rosie Barron: “You don’t have to rip the wrapping paper off 100 presents in order to get the same feeling.”Credit:iStock

As it happens, Kondo, who is so synonymous with decluttering her very name has been transfigured into a verb (as in, "My husband stopped sparking joy so I Kondo'd him"), remains mysteriously silent on the subject of navigating the festive season in both her bestselling book, The Life-Changing Magic of Tidying, and its sequel, Spark Joy: An Illustrated Guide to the Japanese Art of Tidying, which does little to assist her disciples.

"I'm really dreading Christmas," is a common refrain on Kondo fan sites, where members, invariably women, are lamenting the approaching onslaught of gifts, grub and even Christmas cards. "We hate cards in our joy-sparking living room," confesses one writer, asking for advice on the best way to stave off correspondence.

But can you blame them? Having recently devoted a good chunk of their lives to assiduously arranging teaspoons and folding pants into tiny origami rectangles, the last thing Konverts want for Christmas is a tidal wave of tat flooding back down the chimney in the name of baby Jesus.

"It can be so overwhelming because there's just so much to do and so much to buy and never enough space for all the stuff," agrees London lawyer Shrina Shah. Having implemented Kondo's tidying technique a few months ago, however, she has approached Christmas differently this year, both in terms of gift-giving and entertaining. "I'm trying to be a lot more mindful about what I want to get," she explains.

"What I'm not going to do is just go to [the supermarket] with no plan and come back with a trolley filled with food [just] because 'tis the festive season."

Shah's not the only one. Between an uncertain economic future, the looming threat of climate change and simply feeling like our homes are already stuffed to the gills, an increasing number of us are opting for a more "mindful" Christmas.

Actress Emma Thompson has declared she's doing "no gifts" this year, while MoneySavingExpert founder Martin Lewis has long encouraged families to sign up to his Christmas "Pre-NUPP" (which stands for "No Unnecessary Presents Pact"). "Many people feel obliged to buy gifts for others they know they won't use, with money they don't have, and cause themselves stress they don't need," Lewis has said of the initiative.

Working out how to dispose of unwanted gifts is a key issue for Konverts. Former teacher Rosie Barron, who was so taken by The Life- Changing Magic of Tidying when she read it five years ago that she has since retrained as an official Marie Kondo consultant, is well-practised in the art of seasonal restraint.

Despite sharing her Aberdeenshire home with one husband, four children, five dogs and nine horses, Barron is unfazed by the prospect of endless Christmas tat. "I don't worry about the excess because I've trained people well," Barron explains. That means a Secret Santa for the adults, money for her nieces and nephews and a moderate number of presents for her own brood. "Waking up on Christmas morning ripping the wrapping paper off is quite special," she acknowledges. "But you don't have to rip the wrapping paper off 100 presents in order to get the same feeling."

While Konverts can control the level of gift-giving in their own homes, of course, the trouble comes with presents from further afield. The trick, says Barron, is to forewarn family and friends. "For a certain generation, giving a lot of gifts is a way of expressing their love for you. They often have no idea that, actually, you don't want to have heaps of presents," she says.

"So in the run-up to Christmas, and even before, you need to be talking to people and setting expectations.

"Ask would-be gift-givers to contribute towards useful big-ticket items or experiences, such as ski equipment or theme park passes. If people are desperate to give an actual physical item, a heavily curated wish list is quite a good thing."

Inevitably, however, some people are liable to go off-piste and proffer items that, in Kondo's parlance, simply don't spark joy, leaving the recipient to wrestle with their conscience over dutifully keeping said item (ie, shoving it out of sight in a drawer) or taking it straight to a charity shop.

A poll by VoucherCodes.co.uk estimated that the UK spends £1 billion ($1.88 billion) on misguided gifts each year, while December 26 has even been rechristened "Boxing-up Day", with a reported 74 million unwanted presents listed on auction site eBay immediately after Christmas.

Pam Liu, who lives in London with her tech-obsessed husband, says she often feels conflicted over how to deal with unwanted gifts, particularly when it comes to items for the couple's three-year-old daughter.

"Someone just wanted to express that love, so I do feel bad about [giving away] some of my daughter's presents," says Liu. "Especially if she has already seen them… She did walk past the charity shop one day asking, 'Is that my toy?'" (It was, Liu admits.)

Shah, who says she still has unopened presents from her daughter's birth over two years ago, admits that, since decluttering her home, she is much quicker to exorcise items she knows will never be used. "I'm quite ruthless, to be honest," she confesses. "[Although] I do feel guilty about it."

Some families now even start before December 25 – organising a pre-Christmas clear-out in anticipation of the inevitable influx of new toys. One increasingly popular concept is the "reverse" Advent calendar, in which one item is donated for each day of Advent. "It's an inventive and inspiring way to engage children in decluttering before the holiday season," says professional organiser Juliet Landau-Pope, who recommends it to her clients.

"Ask children to put a small toy or game in a box each day to donate to a charity shop or children's charity. It's a great way to help children understand that holidays are about giving, not just receiving."

Gift-giving itself, however, can be equally fraught for Konverts, who worry about encumbering others with unwanted presents as much as they do receiving them. Wendy Tunnicliffe, who runs Blake House, a co-working space in York, admits the process of decluttering her own home has made picking out presents for others that much harder, particularly when it comes to her six-year-old nephew and two-year-old niece.

Equally, while Liu credits Kondo for streamlining her family's spending habits – "We're definitely buying less stuff" – she has also found that gift-giving is now a minefield. "That is the biggest challenge," Liu acknowledges. "I have no idea what to get my husband for Christmas because he has everything. I don't want to get him something that I then have to Marie Kondo out a few months later."

CHELSEA have reportedly been offered Arsenal legend Aaron Ramsey or Adrien Rabiot in exchange for Jorginho by Juventus. Former Blues

Playing The Sims is being turned into a reality TV series – where do we sign up?

CHELSEA have reportedly been offered Arsenal legend Aaron Ramsey or Adrien Rabiot in exchange for Jorginho by Juventus. Former Blues

Playing The Sims is being turned into a reality TV series – where do we sign up?

07/09/2020
We and our partners use cookies on this site to improve our service, perform analytics, personalize advertising, measure advertising performance, and remember website preferences.Ok