A stunning floor mural that represents the rivers of heaven and earth is the centrepiece of the NGV’s major new show Bark Ladies.

Curated jointly by the Buku Larrngay Mulka Centre and the NGV, the show features diverse work by 11 female artists from Yirrkala in northeast Arnhem Land. 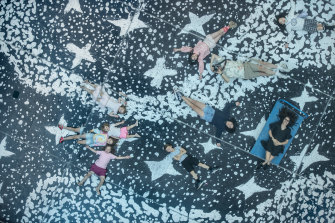 Kids lie on the stunning floor mural made from Naminapu Maymuru-White’s Milŋiyawuy or River of stars at the NGV, as part of the Bark Ladies exhibition. Credit:Simon Schluter

A detail from Milngiyawuy (River of stars), by Naminapu Maymuru-White, has been supersized and translated into 570-odd tiles, laid out across the gallery’s entrance hall floor.

“These designs I have been doing like this focus back to the land, the people, and song because they are all related. Through songs, through rivers, through people,” she says.

The artist says her work inverts the sky and the land and the sea. A suspended mirror over the mural allows people to look up and see themselves standing on earth, gazing up into the heavens, each a part of the other. The idea is that as you walk over the piece, you’re walking on a river of stars.

Maymuru-White says rivers flow from one clan country to another and keep moving, flowing to different places, and out to sea, then upwards.

The work is about mortality, the relationship between the living and the dead and our spiritual philosophy or religion. The idea that those who have died are still with us and always will be is a balm. In Yolgnu philosophy, time is contemporaneous, rather than the linear Western idea of past and present. 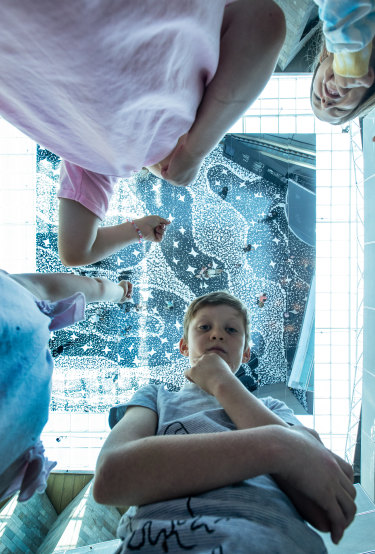 Children at the Bark Ladies show at the NGV. Credit:Simon Schluter

“The Milky Way and this river of stars, that’s where the souls of people who have passed away go, so that’s how she connects that experience of life and afterlife, allowing people to be present within the universe,” says NGV senior curator of Indigenous art Myles Russell-Cook. “As you look up you can see yourself in this suspended mirror, you’re also caught between the heaven and earth.” 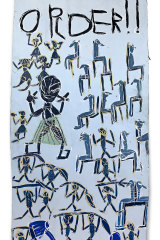 The late Gulumbu Nginpingu also features the night sky in her work, painting a series of crosses and in between a dense field of dots: the crosses represent the stars that you can see and the dots those you can’t see. “Sometimes the Yolgnu refer to those we can’t see as ‘the second stars’,” Russell-Cook says. “If you looked up and could see all the stars that exist in the universe, then the sky would just be stars.“

A more focused take on existential issues is Dhambit Munuŋgurr’s painting of Julia Gillard’s misogyny speech in parliament. A departure from her previous work which mainly features ancestral Yolgnu stories, Order shows Gillard surrounded by unnamed politicians, while Yolgnu people appear in the bottom left, storming the parliament in ceremony, dancing with spears.

It is only relatively recently Yolgnu women have been able to paint on bark. Traditionally, it was the men’s domain. The earliest of their work in the NGV’s collection is from 1990 but since the 2000s, women artists have become internationally recognised. Most of the works on show were acquired by the gallery in the past five years; more than 70 large-scale bark paintings and larrakitj (painted hollow poles) are on display.

Bark Ladies is NGV International, rather than the Ian Potter Gallery at Fed Square, home to the gallery’s collection of Australian art. Russell-Cook says it was a deliberate decision to show these works alongside their international counterparts. “Indigenous art and global First Nations works are part of the story of contemporary art.“

While visitors might have pre-conceptions regarding bark paintings, Russell-Cook says this show will shift people’s understanding. “Each artist in her own way has reinvented [bark painting], or shifted the goalposts,” he says. “Indigenous art is contemporary art, it doesn’t have to be viewed as separate. It is very old but is utterly new.”

Bark Ladies is at NGV International until April 25, 2022.